Arsenal will be happy with the kind of start they have made to the English Premier League season. The Gunners have won six of the seven games played and are leading the league table. Their attackers have been in fine form this season and are finding the back of the net more consistently this season. However, the biggest contribution in this run has come from the defence of the team. The Gunners have a new centre-back pairing this season and this pairing has proved to be handy for the Gunners. Last season, Gabriel Magalhaes played alongside Ben White. William Saliba returned to Arsenal following his loan spell, and now he partners Gabriel in the heart of the defence. These two have proven to be sold at the back and we look at some of the stats that show how the centre-back pairing has performed this season.

Gabriel Magalhaes continues to play as the left centre-back in the team. He was the best defender for Arsenal last season, and that caught the eye of many clubs. This season, the Brazilian has once again started on a high. The above viz shows the defensive territory of the player. Gabriel Magalhaes has only committed one foul this season and that was made in the attacking half. He averages 4.6 interceptions per 90 minutes, and most of them are made in the defensive third. Other than this, he has won 65.2% of his defensive duels, 61.1% of his aerial duels, and 58.2% of his loose ball duels. 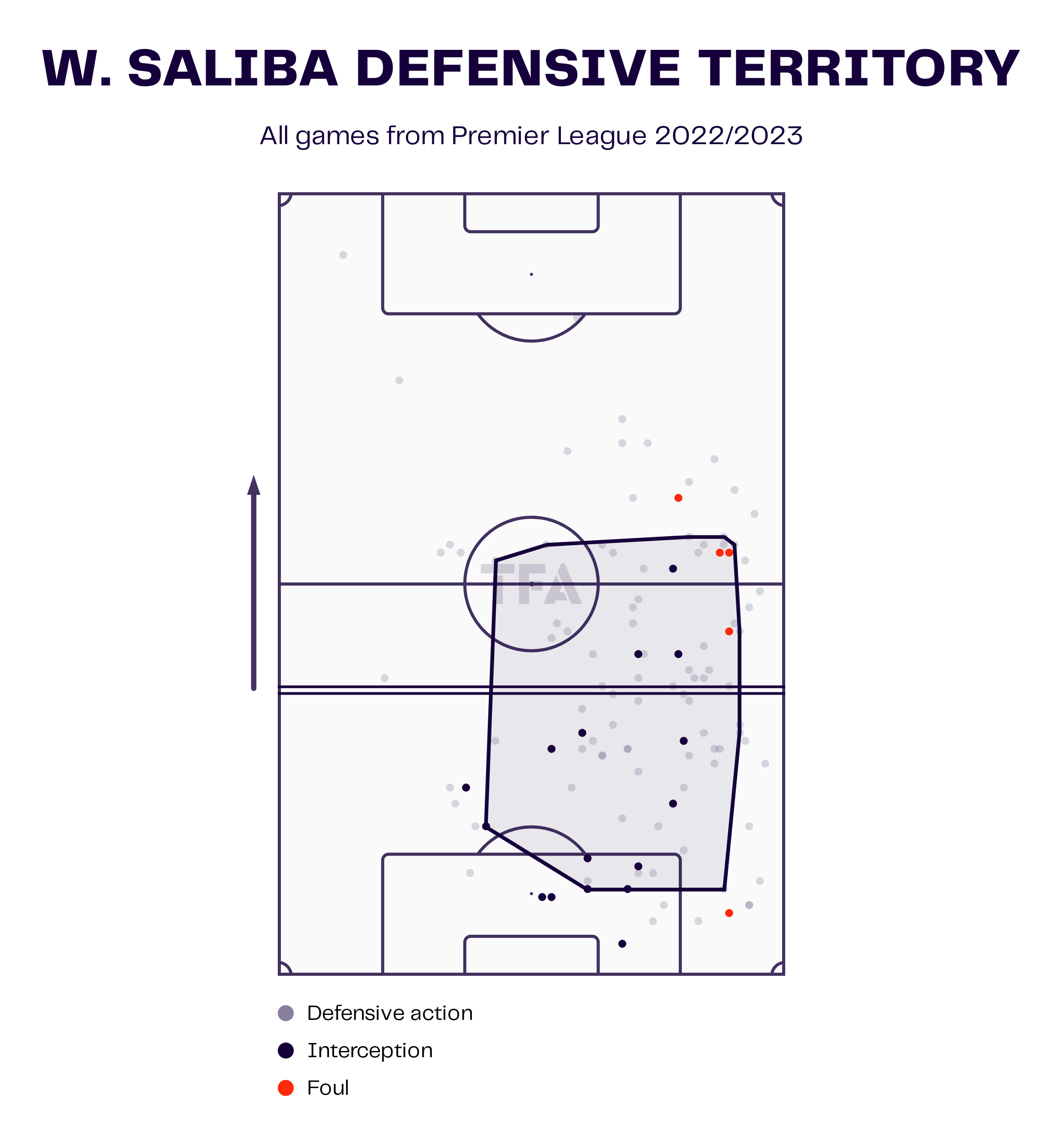 William Saliba plays next to Gabriel Magalhaes and has also defended his territory well. He was sent on two loan spells before getting a chance for Arsenal. William Saliba is settling well in his first season in the English Premier league. He is a bit aggressive and has committed a few fouls. William Saliba goes hard in challenging for the ball and has won 75% of his defensive duels. Other than this, the win percentage for aerial duels in 45% and 50% for loose ball duels. The interception rate is a bit low at 2.9 interceptions per 90 minutes.

These two can pass the ball and have an aggressive nature. They like to play high up on the pitch and are good in recovering the ball for their team. 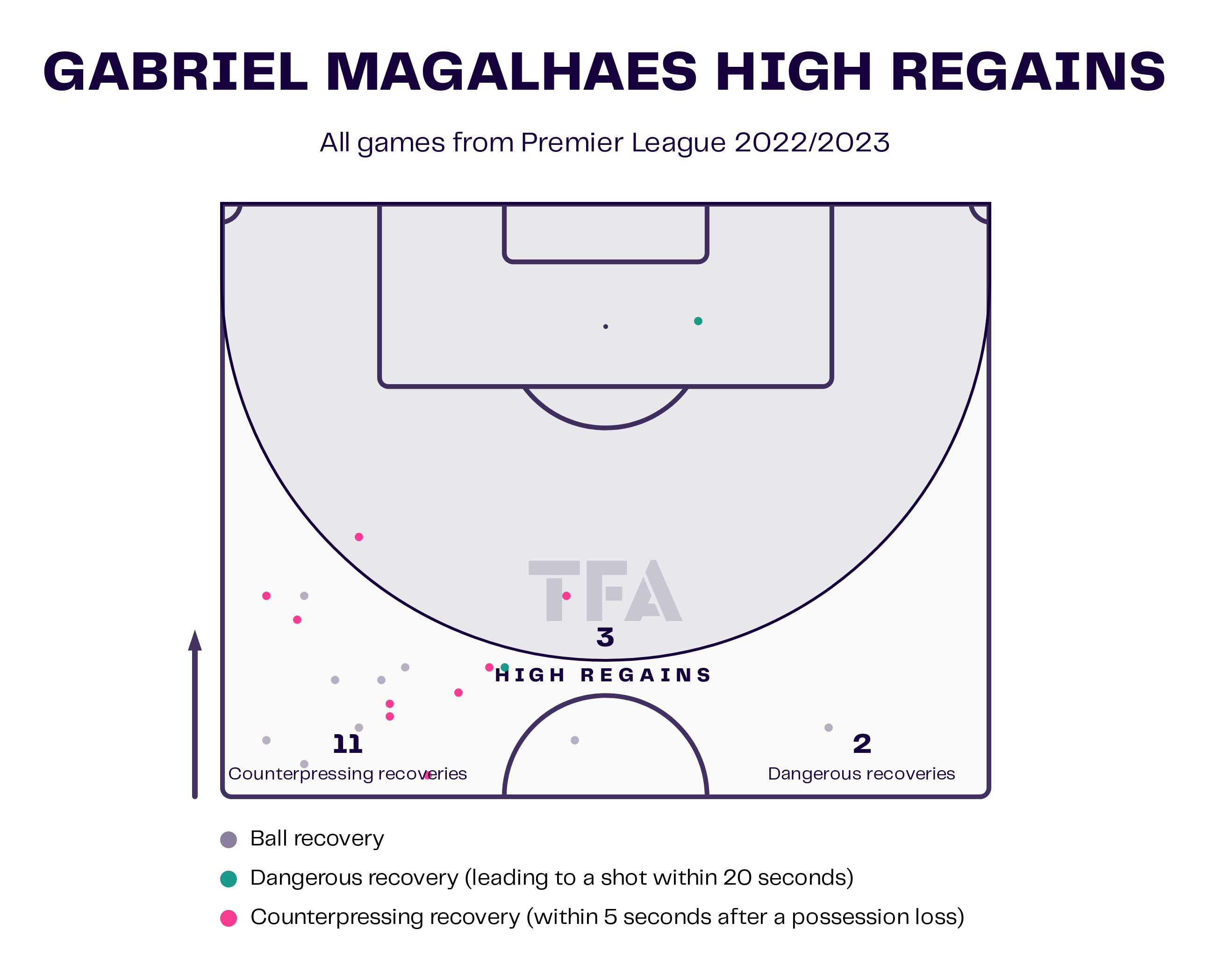 Gabriel Magalhaes averages 10.8 interceptions per 90 minutes and 25.6% of them are made in the attacking half. The above viz shows that Gabriel has made 11 counter-pressing and two dangerous recoveries. One of the dangerous recoveries was made inside the opposition penalty box. 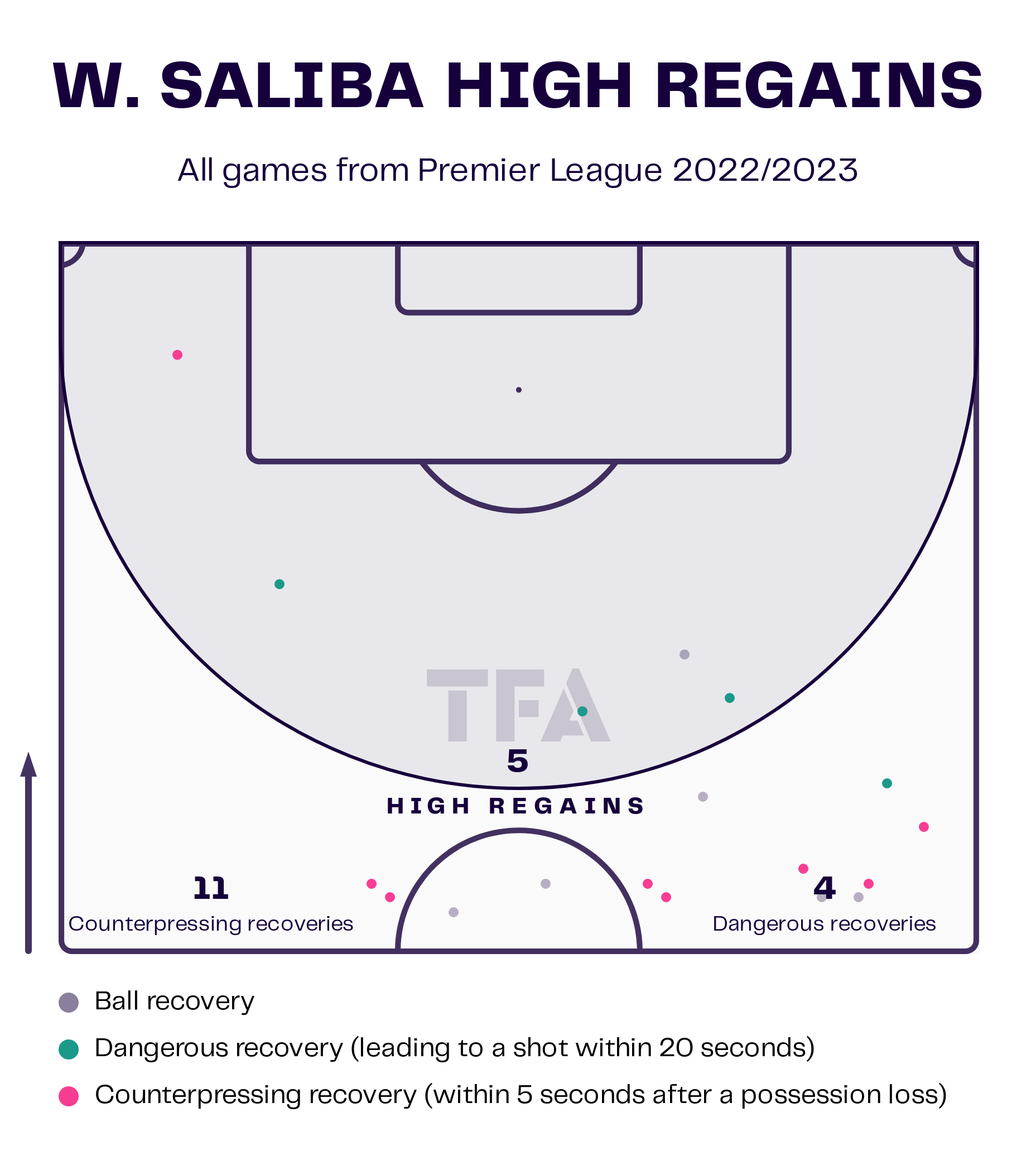 William Saliba has made more dangerous recoveries than his partner in the attacking half. He averages 10.66 recoveries per 90 minutes and 23.5% of them have been made inside the opposition half. Saliba likes to go high up the pitch and has recovered a few balls in the final third.

Both these players have also scored three goals in total, with Saliba scoring two of them. This makes them a threat during set-pieces and this is a great positive for the manager. Mikel Arteta will expect the same consistency going into a tough season and hope that these two don’t leak a lot of goals this season.

Under the microscope: Gabriel and Saliba – The new defensive pairing...

Arsenal boss is doing much better