Mikel Arteta would be happy with the kind of start his players have given Arsenal this season. The Gunners remain the only team in the English Premier League with a 100% record. They began the last season with three losses, but this season, they have turned the fortunes in their favour. Gabriel Jesus has been a sensational signing and has improved the attack. One of the areas where the Gunners have looked solid is their defence. William Saliba has finally got a chance to wear Arsenal’s shirt after spending two seasons away from North London. He has straightaway moved into the centre-back role alongside last season’s best defender, Gabriel Magalhaes. Both these players have formed a partnership in the heart of the defence, and Arsenal look like a team to beat this season. Some of the stats from this season show how both these players have helped Arteta to achieve early success.

Arsenal play in a four-at-the-back formation, with Gabriel and Saliba taking the centre-back roles, Zinchenko on the left and Ben White on the right. White was Gabriel’s defensive partner last season, but Arteta has given him command of the right side. The combination of these four players has worked for Arsenal, and they have kept two clean sheets in three matches. 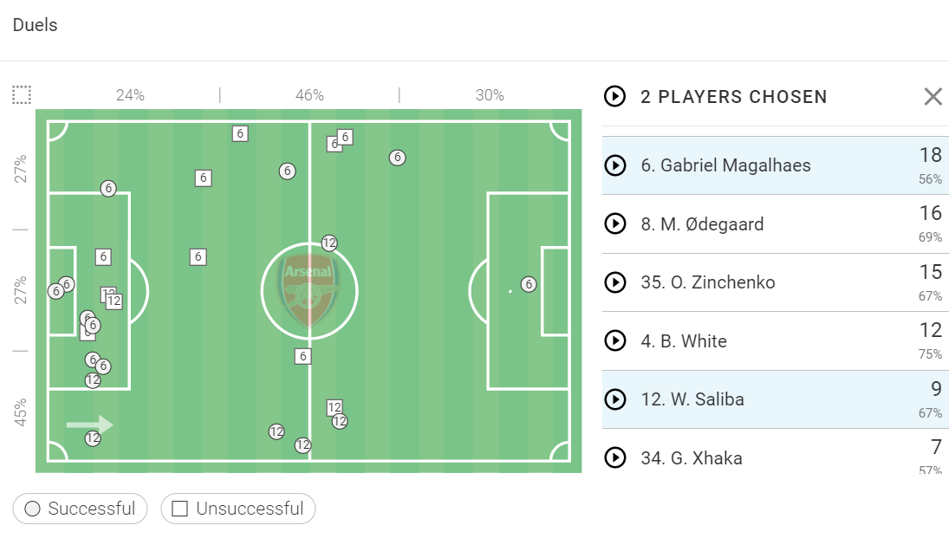 Both these centre-backs are defensively strong and are not afraid of challenging for the ball. Magalhaes has contested 42 duels and Saliba has contested 30 duels. The Brazilian has a win percentage of 69%, while the Frenchman is just behind him with a success rate of 63.3%. The above viz shows the duels contested by these players in the last few games. It can be observed that they lost most of the areas high up on the pitch and won crucial duels inside the penalty box. Magalhaes has a high win percentage of 77% for aerial duels, and Saliba has won 73.3% of his defensive duels. Both players complement each other on the pitch. 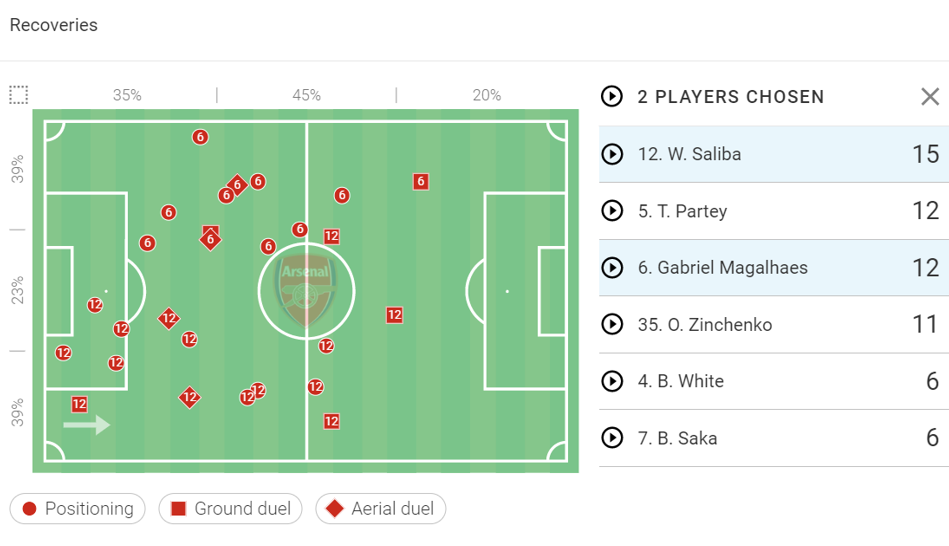 Another area where these two players have excelled is in recovering the ball. Both players have made a combined total of 66 recoveries, with Gabriel making two more recoveries than his defensive partner. Saliba has made six recoveries inside the opposition’s half, while Gabriel is just one recovery behind him. The above viz shows all the 27 recoveries that were made in a high-scoring match against Leicester City. Both these players made a combined total of 27 recoveries, with 12 coming in the middle third. This shows that these defenders can play high up on the pitch and win the ball to help their side dominate the attack. Both these players have also made 32 interceptions, with Gabriel making four more interceptions than Saliba.

In these three matches, these centre-backs have shared 87 passes amongst each other. They have been confident on the ball and have tried to create plays from the back. Overall, they have stabilised Arsenal’s defence and could take them to new heights. Arteta will be happy with his new defensive pairing and will hope that these two help his side win silverware this season.

Under the microscope: Gabriel Jesus- The Manchester City outcast who could...