Arsenal were looking to sign a midfielder in the summer transfer window. They made a lot of effort to sign Youri Tielemans from Leicester City, but the transfer didn’t go through. This meant that Arsenal had to stick with the same set of players. Many thought that this might be a weak link in the team. However, things haven’t gone the way many expected and Arsenal are sitting at the top of the table. One of the biggest reasons behind this is the midfield partnership of the Swiss-Ghanaian pair of Granit Xhaka and Thomas Partey. Both players have shown a lot of improvement, and that has helped the Gunners to get the results they wanted. We now look at some of the stats of these two players and how they have paired up this season.

Xhaka on the left, Partey on the right

The duo of Granit Xhaka and Thomas Partey have played together in seven matches for the Gunners. The latter has missed three games due to injuries. Arsenal have a 100% record whenever this pair has started together in the midfield for Arsenal in the English Premier League. Granit Xhaka has improved his stats a bit and has two goals and three assists in ten games. His partner has scored a goal in seven English Premier League appearances this season. 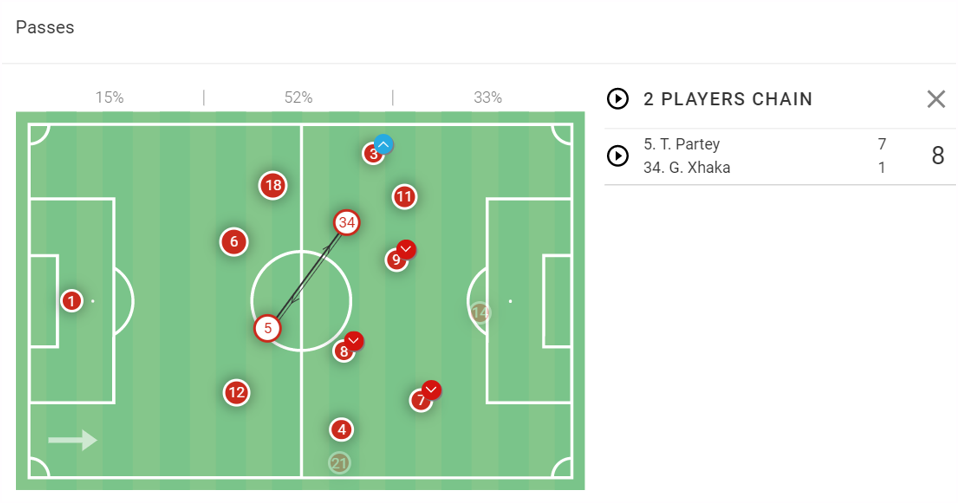 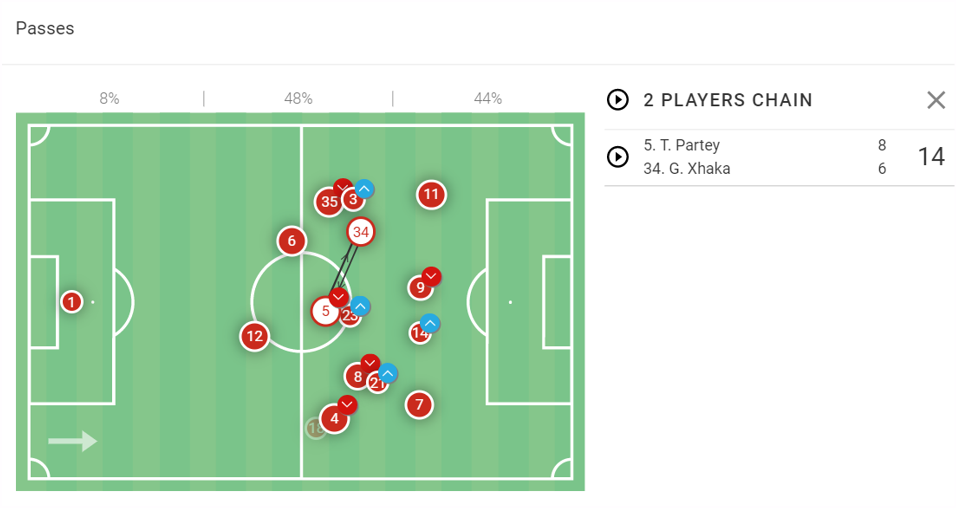 Mikel Arteta’s team lines up in a 4-2-3-1 formation. Granit Xhaka plays on the left side in midfield two, and Thomas Partey plays on the right side. This season, the manager has given different roles to these two, and this can be noticed by looking at the above visuals. The first one shows the average position of the players against Liverpool and the second one against Spurs. Thomas Partey plays as a defensive midfielder, whereas Granit Xhaka is given a more advanced role. This is why Xhaka has been able to make more goal-scoring contributions for the team.

Granit Xhaka, on the other hand, averages 43.2 passes per 90 minutes and has an 87.9% accuracy rate. These passes include 5.7 passes to the final third and 1.47 passes to the opposition penalty box. The Swiss international is on the receiving end of 34.1 passes per 90 minutes. These two have been able to keep the ball and distribute it to different corners of the pitch. 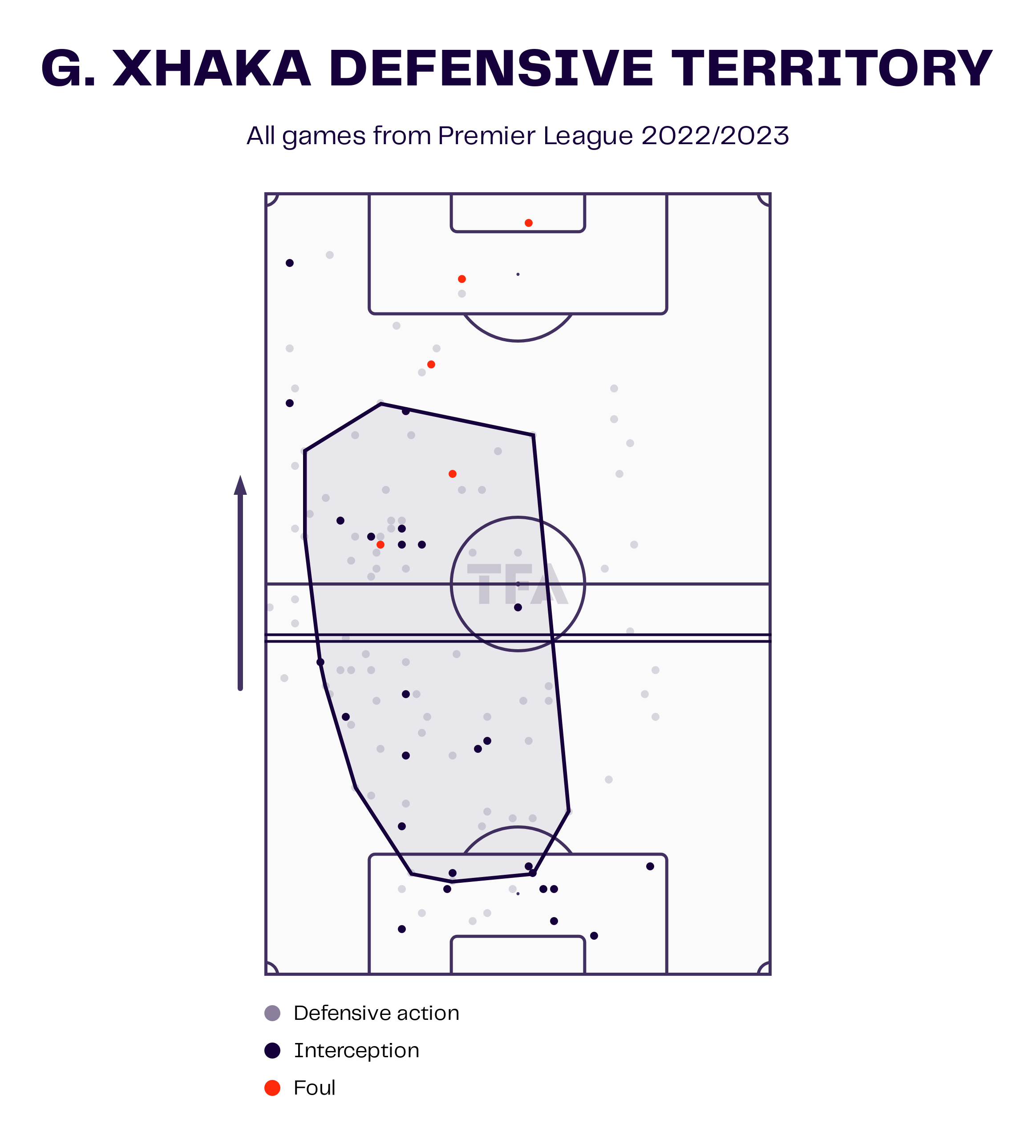 These two players have made some important defensive contributions that have helped their side secure three points in all the matches. Granit Xhaka covers a lot of areas on the left side, as shown in the above viz. The 30-year-old has shown a little bit of discipline and only averages 0.46 fouls per 90 minutes. We can observe that he has committed every foul in the opposition’s half. The defensive contributions of the player include 70.3% of defensive duels won, 64% of aerial duels won, and 45.8% of loose ball duels won. Adding to this, the average player makes 3.95 interceptions per 90 minutes. Some of the interceptions came in the penalty box, and these have been crucial in stopping the opposition from scoring goals. 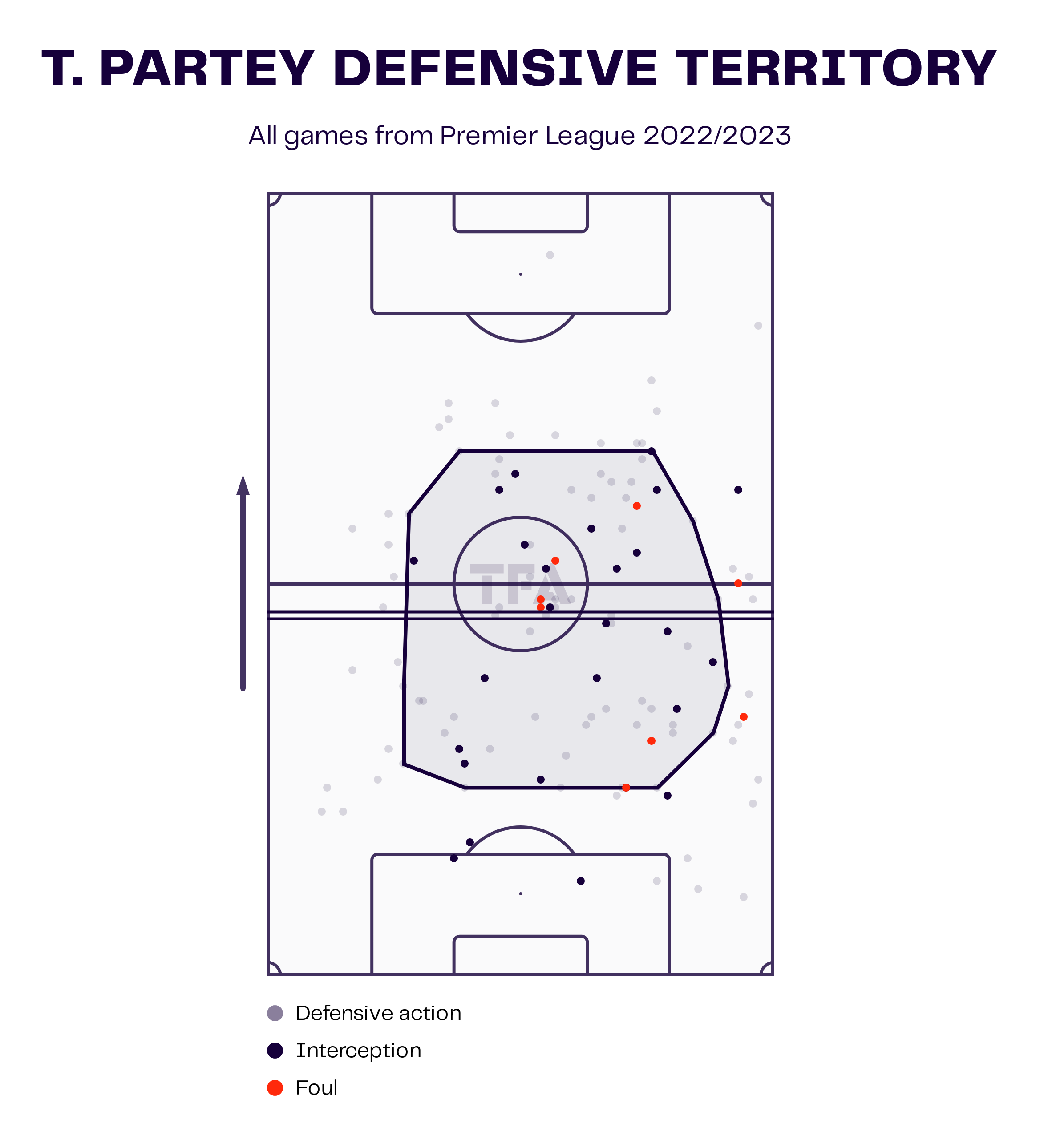 Thomas Partey has a very different defensive territory, and he acts as the main shield in front of the back two. He contests more duels than Xhaka and has a win rate of 61.2% for defensive duels, 45% for aerial duels, and 43.5% for loose ball duels. The interception rate is a bit high at 5.25 per 90 minutes, but the player averages 1.1 fouls per 90 minutes and has committed a few errors inside the defensive half. 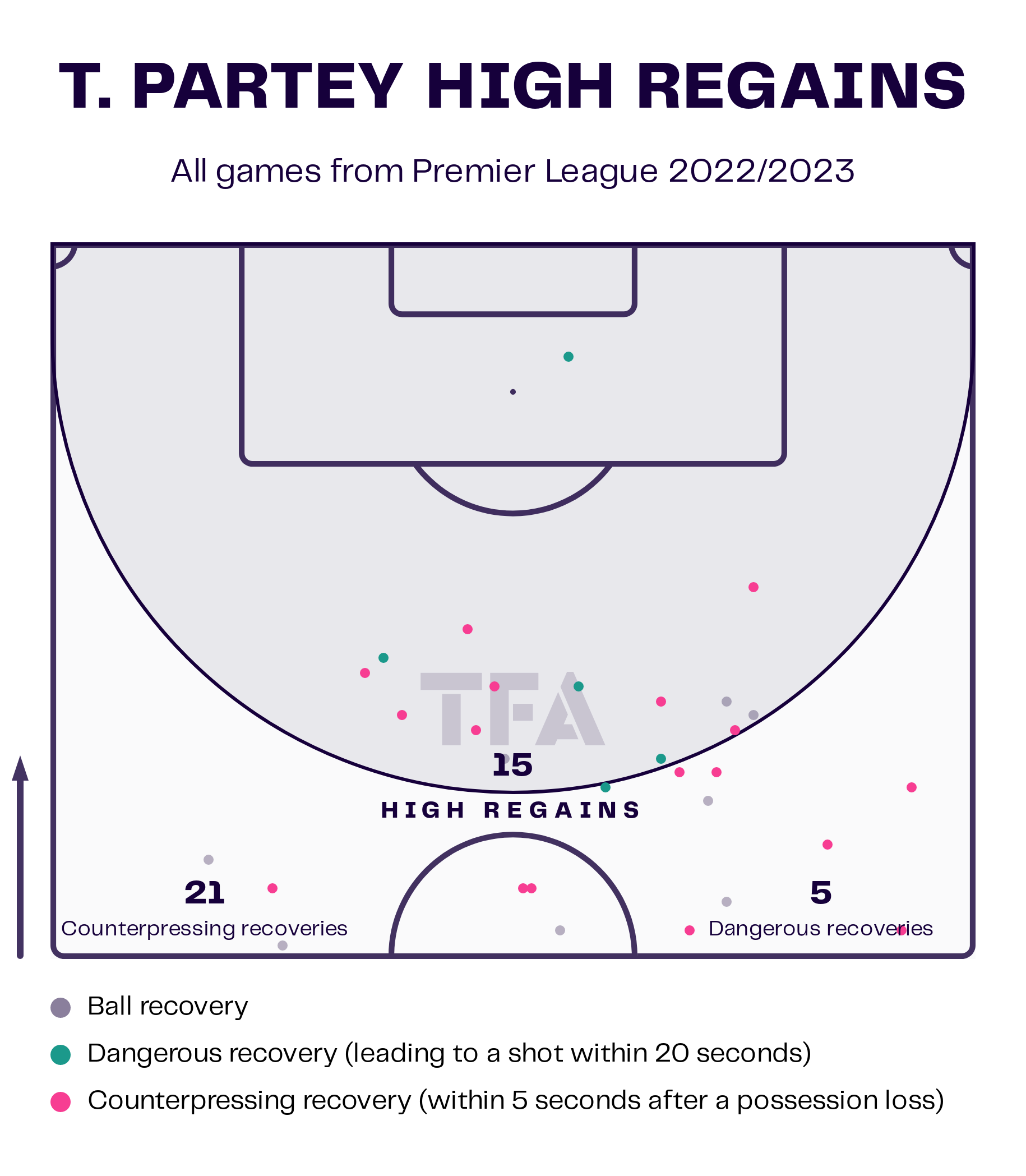 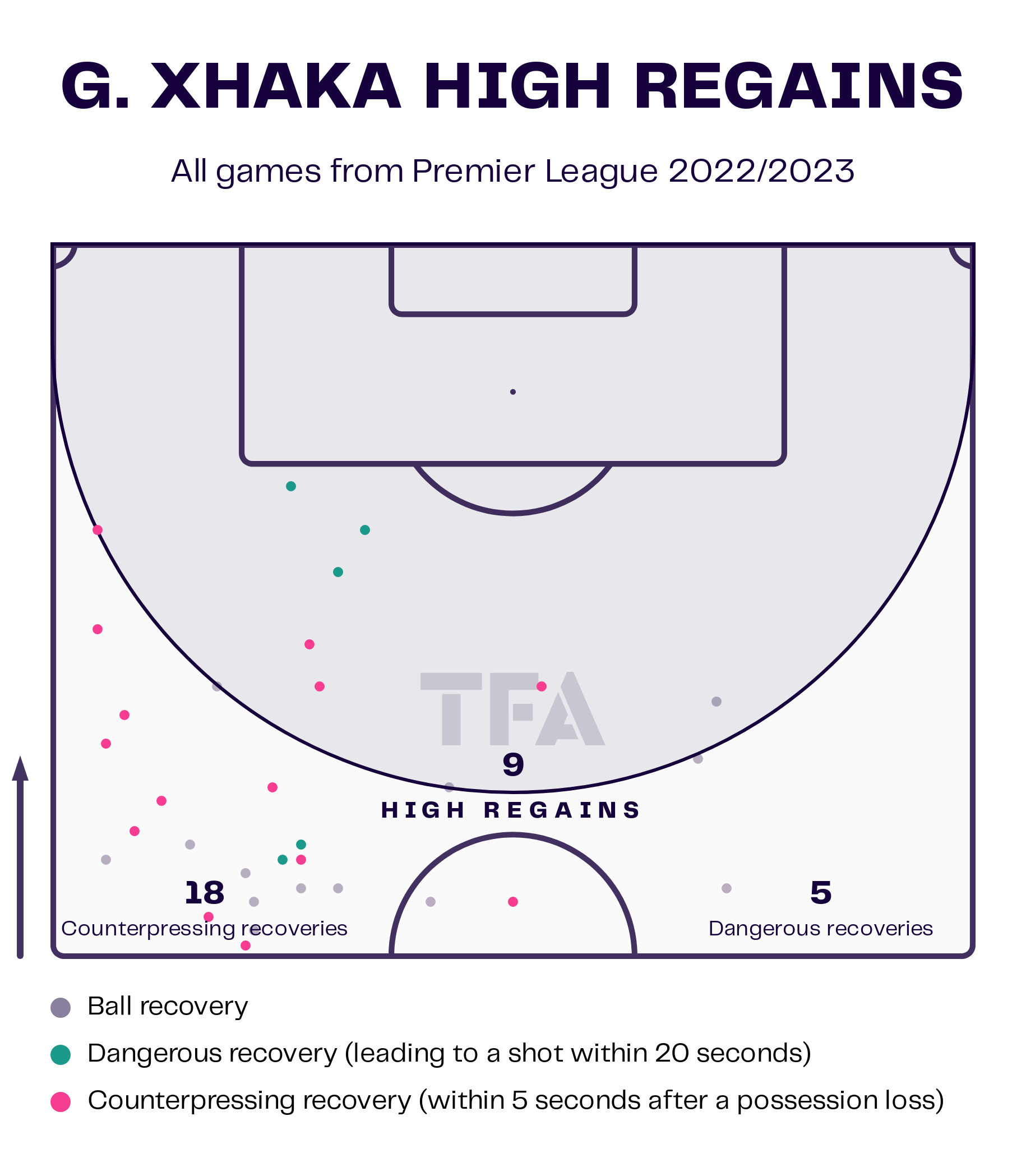 Arsenal likes to play a high attacking line and stay on the front foot. During these attacking plays, they occasionally lose the ball. In order to maintain the attacking momentum, the team needs some players who can recover the ball in the attacking half. These two have been brilliant in making high recoveries, and most of them have been made in dangerous areas. Thomas Partey averages 11.18 recoveries and Xhaka averages 7.54 recoveries. Both players make around 40% of their recoveries in the opposition half. The above viz shows that Partey makes more high regains than Xhaka, and this is due to his holding role for the team.

The duo of Granit Xhaka and Thomas Partey has eased the worries of Mikel Arteta. Both players have performed their tasks, and the manager will be happy with the results his team is getting due to some of the individual performances. One of the concerns in this partnership is Thomas Partey’s injury issues. This pair is likely to continue in the same role throughout the season, and Mikel Arteta will hope that they keep their record intact till the end of the season.

Manchester United vs Arsenal Preview: 3 things to look out for...