Arsenal’s incredible start to the season has raised a lot of hopes for the players and the fans. The Gunners have won six of their seven league games and are leading the English Premier League table.

Mikel Arteta’s tactics have worked, and his new signings are getting along with the team. He is building a squad of young, talented players, and these players are giving some match-winning performances for their team. In order to contest for the title and other cups, the Gunners are already scouting some players to add them in the winter transfer window. One of the players on the radar of the North London club is Shakhtar Donetsk’s winger, Mykhailo Mudryk.

The winger is becoming one of the hottest properties in world football. His performances in the UEFA Champions League have attracted the interest of many clubs. With Arsenal having limited options in attack, the Gunners will be ready to pounce on any opportunity to sign the striker. We now look at some of the stats that show why Arsenal have shown an interest in the 21-year-old winger. 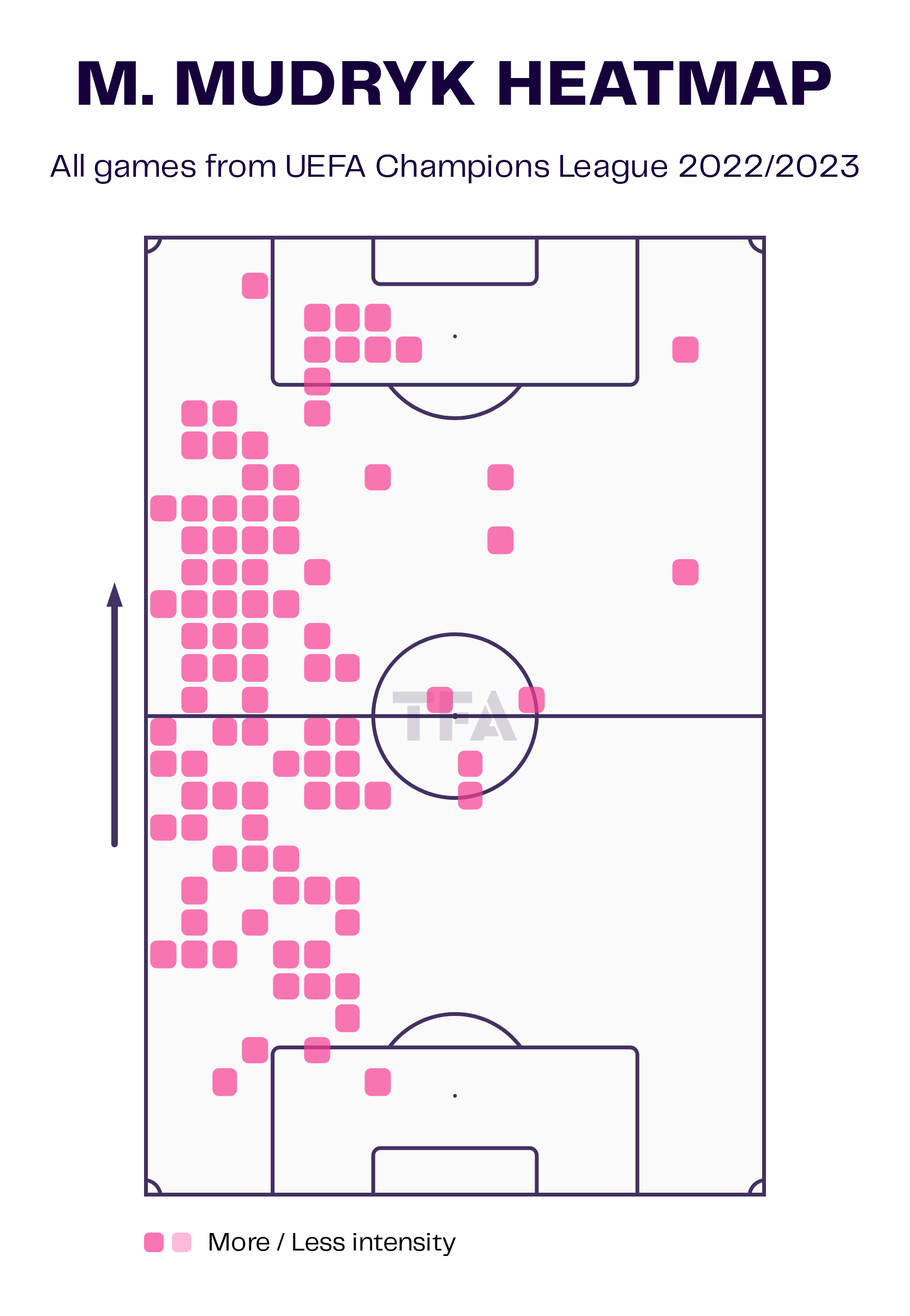 Mykhailo Mudryk has played two matches for his side in the UEFA Champions League. He has scored a goal in each of the games and also has two assists to his name. These performances have attracted the interest of many clubs. The 21-year-old plays on the left wing and has a lot of pace that allows him to run past the opposition defenders quite easily. The winger also played in the same competition last season and spent 243 minutes on the pitch. Shakhtar had a poor run in the competition and Mudryk was also unable to make an impact on the team. 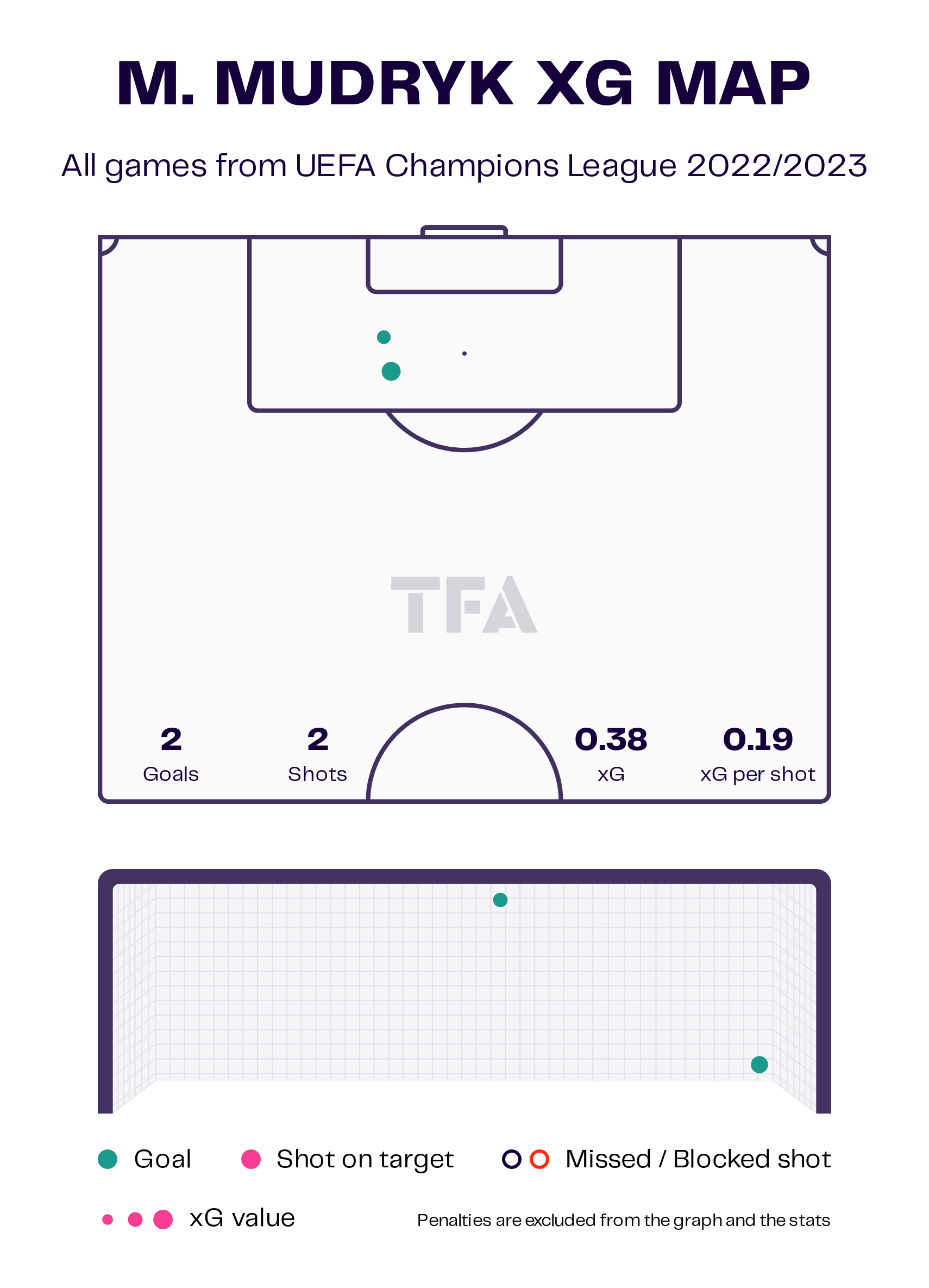 The Ukrainian international has attempted only two shots in the UEFA Champions League and has found the back of the net on both occasions. Mudryk likes to cut inside from the left side and attempt a shot from his favoured right foot. Last season, he had four shot attempts and all were on target. This shows that Mudryk is quite accurate with his shooting skills and has an eye for a goal. 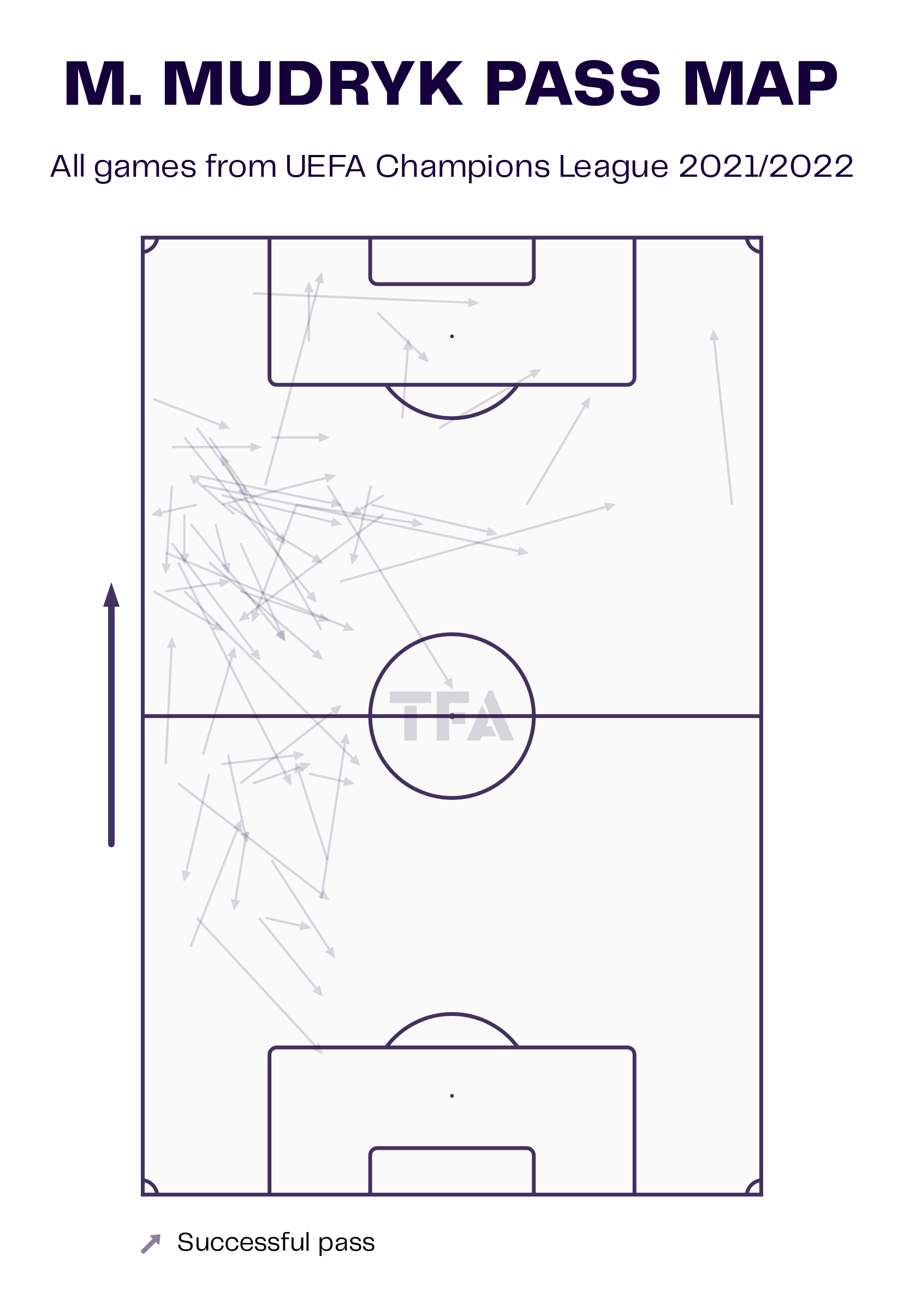 The winger has two assists to his name this season. He averages 17.9 passes per 90 minutes and has a high accuracy rate of 89.5%. These include 1.88 passes to the final third, with a 100% accuracy rate. His only cross this season was converted into a goal by a teammate. The above viz shows the pass map of the last season. Mykhailo Mudryk attempted 76 passes and had a low accuracy rate of 79%. We can notice that the winger likes to stretch the opposition defence on occasions and attempts a dangerous pass that lands in front of the goal. He has shown a bit of creativity on his side. 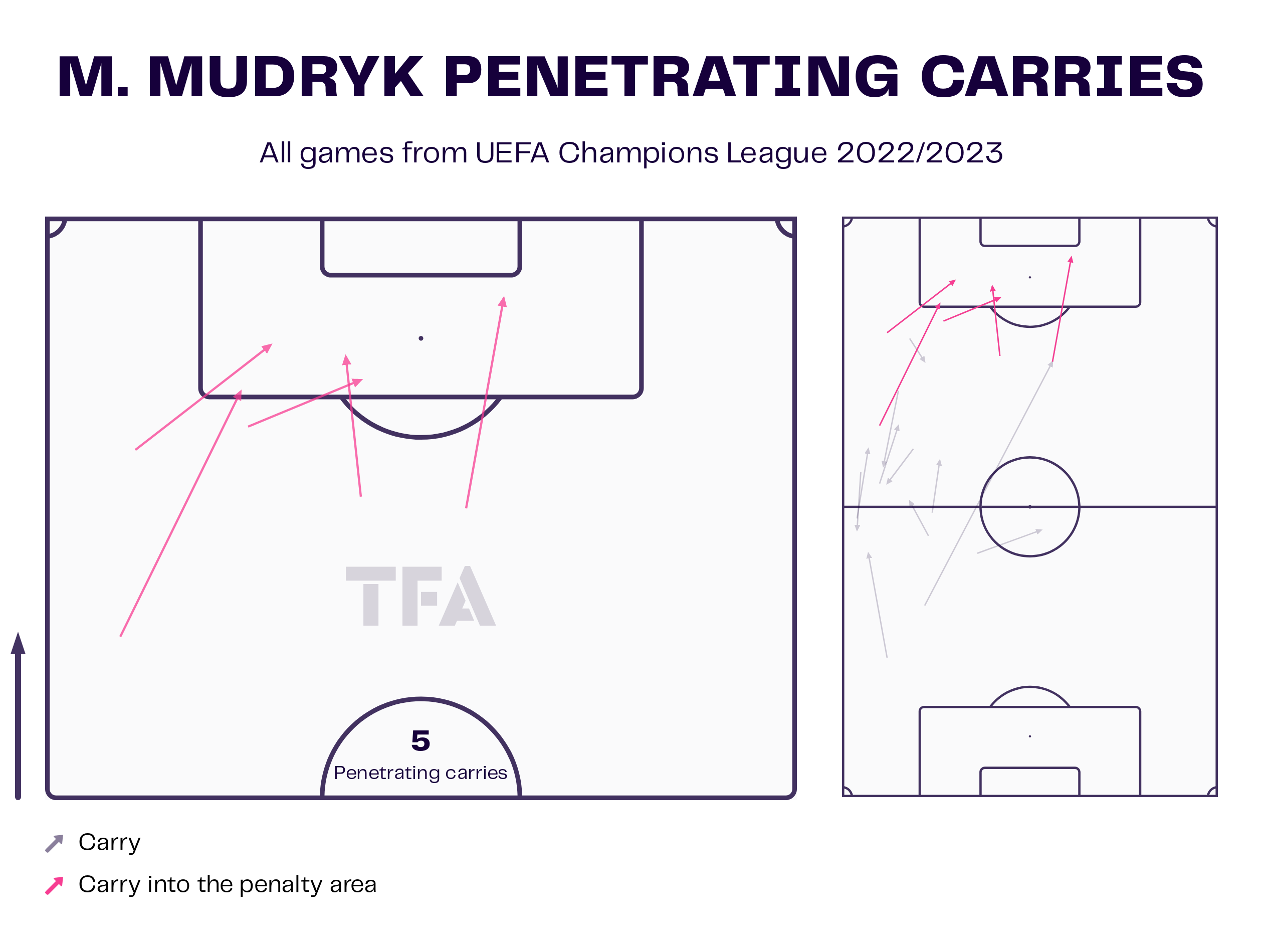 One of the abilities of the player is to penetrate the opposition penalty box with the ball. He has already done this five times. Most of the runs have been made from the wing, and these runs sometimes open space to attempt a shot. 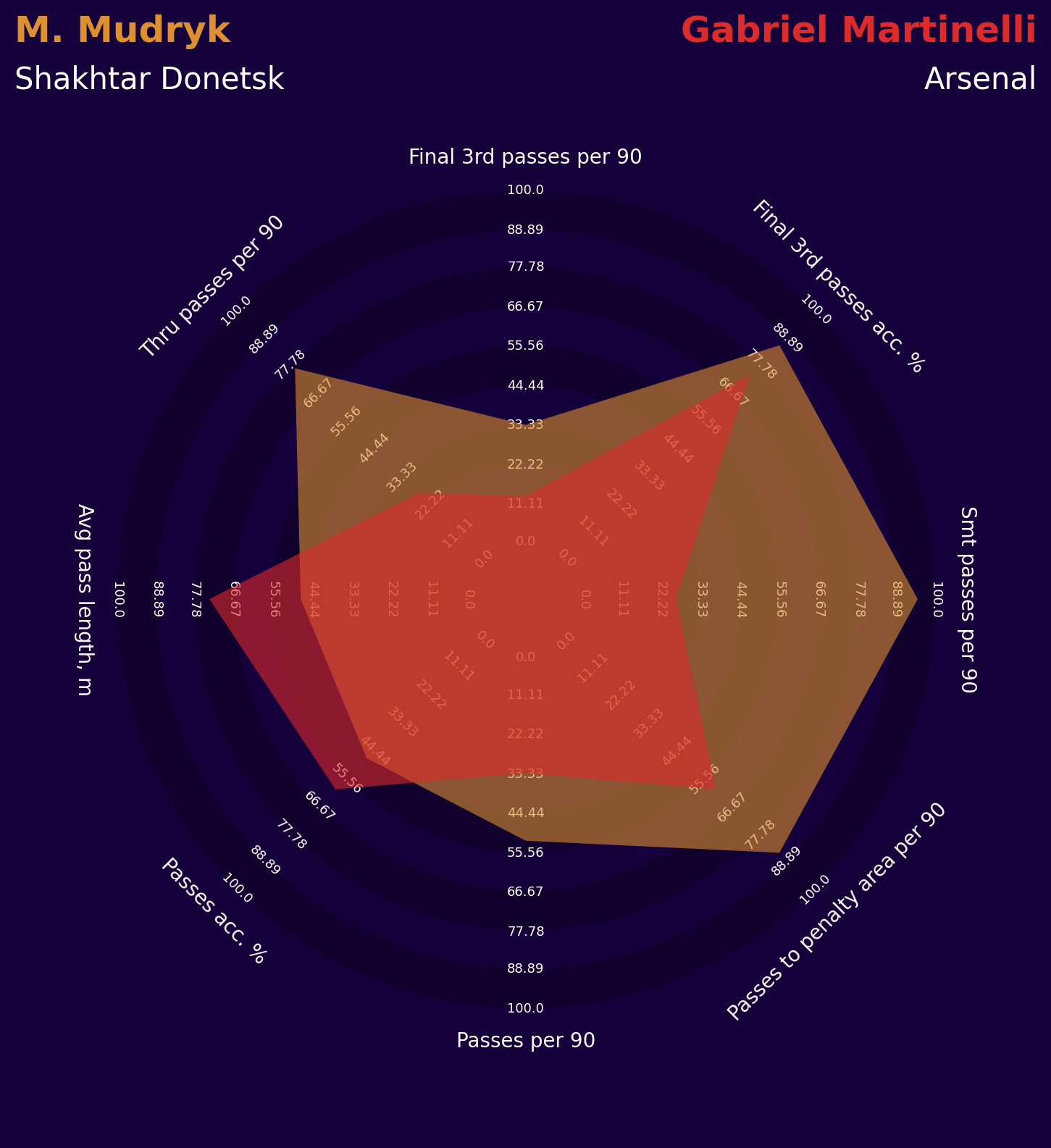 Gabriel Martinelli has occupied the left-wing position. He started his career as a proper number nine but now has adjusted to his new role. He still likes to cut inside and his average position is a bit towards the centre rather than staying wide on the field. The above viz compares the passing stats of Martinelli with Mudryk. We can observe that Shakhtar’s winger has attempted more passes than Martinelli. He even averages more passes to the penalty area per 90 minutes. Mykhailo Mudryk’s creativity makes him a threat on the left side.

Mykhailo Mudryk is starting to settle at the top level. He has shown his potential and could be on the move away in the winter. The 21-year-old is an upcoming talent in Ukraine and might end up playing with his countryman, Oleksandr Zinchenko, in the second half of the season.