Arsenal are eyeing a shock move for Chelsea midfielder, N’Golo Kanté. The Frenchman is one of the best midfielders in the English Premier League and carries a lot of experience behind his back. Arsenal continue to search for midfielders as Mikel Arteta aims to win silverware with the Gunners next season. Their main target is Leicester City’s Youri Tielemans, and Kanté’s addition would surely strengthen their chances of winning something next season. Kante is not listed in the transfer window but only has a year left on his contract. Chelsea allowed Antonio Rüdiger and Andreas Christensen to leave on a free transfer and won’t make the same mistake once again. They might look to cash in on the player, but only after they get a replacement for him. Arsenal, on the other hand, are in need of a midfielder, and Kanté could become the perfect fit for them.

Kanté has been a regular in Chelsea’s starting 11 since signing for them in 2016. However, a few injuries in the last 2-3 seasons have limited his playing time on the field. The 31-year-old made 39 appearances for Chelsea in all competitions and scored two goals, along with five assists. The above viz shows the pass start location as well as the threat created from passes at different time intervals in 26 English Premier League appearances made by the player. Kanté is a box-to-box midfielder and started as the right central midfielder. He covers a lot of areas on the field and is a tough player to get past.

Last season, Kanté averaged 59.2 passes per 90 minutes with an accuracy rate of 89.04%. These included 16.8 forward passes per 90 minutes. Kanté’s main role is to build play, but the midfielder can also create chances for his team. He registered four assists in the English Premier League last season. Most of the passes were attempted towards Reece James, followed by Mason Mount and César Azpilicueta. 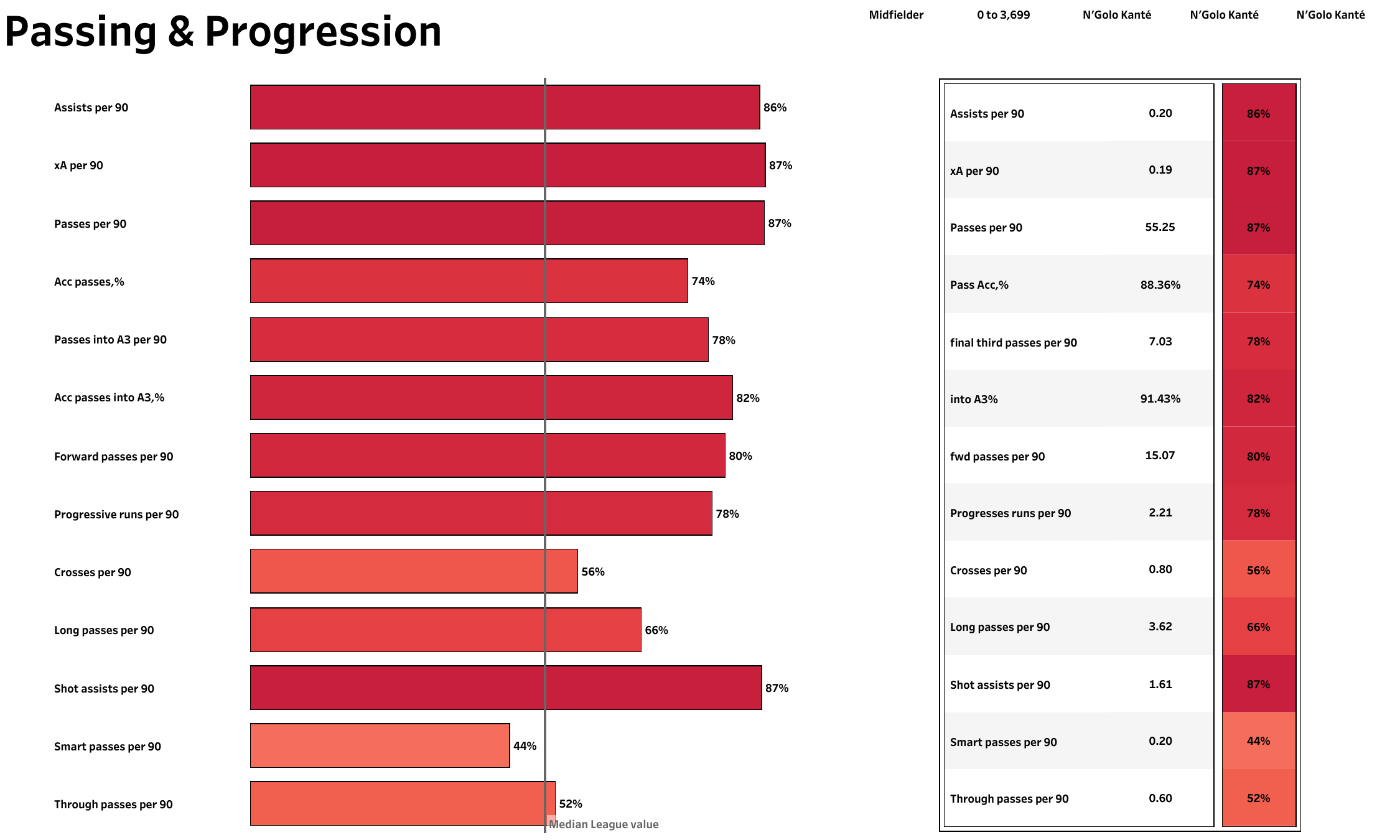 The above viz shows his passing stats from the 2020/21 season. When looking at the above chart, the general rule is that the longer the bar, the better the performance — you can see the league average in the middle, and the % is the percentile rank the player is in. Kanté provided two assists in 30 appearances and had better stats in that season. His passing average was a bit low, but he averaged more passes into the attacking third with a high accuracy rate. Kanté has been consistent with his passing in the last two years, and this shows why he is so highly rated in modern football. 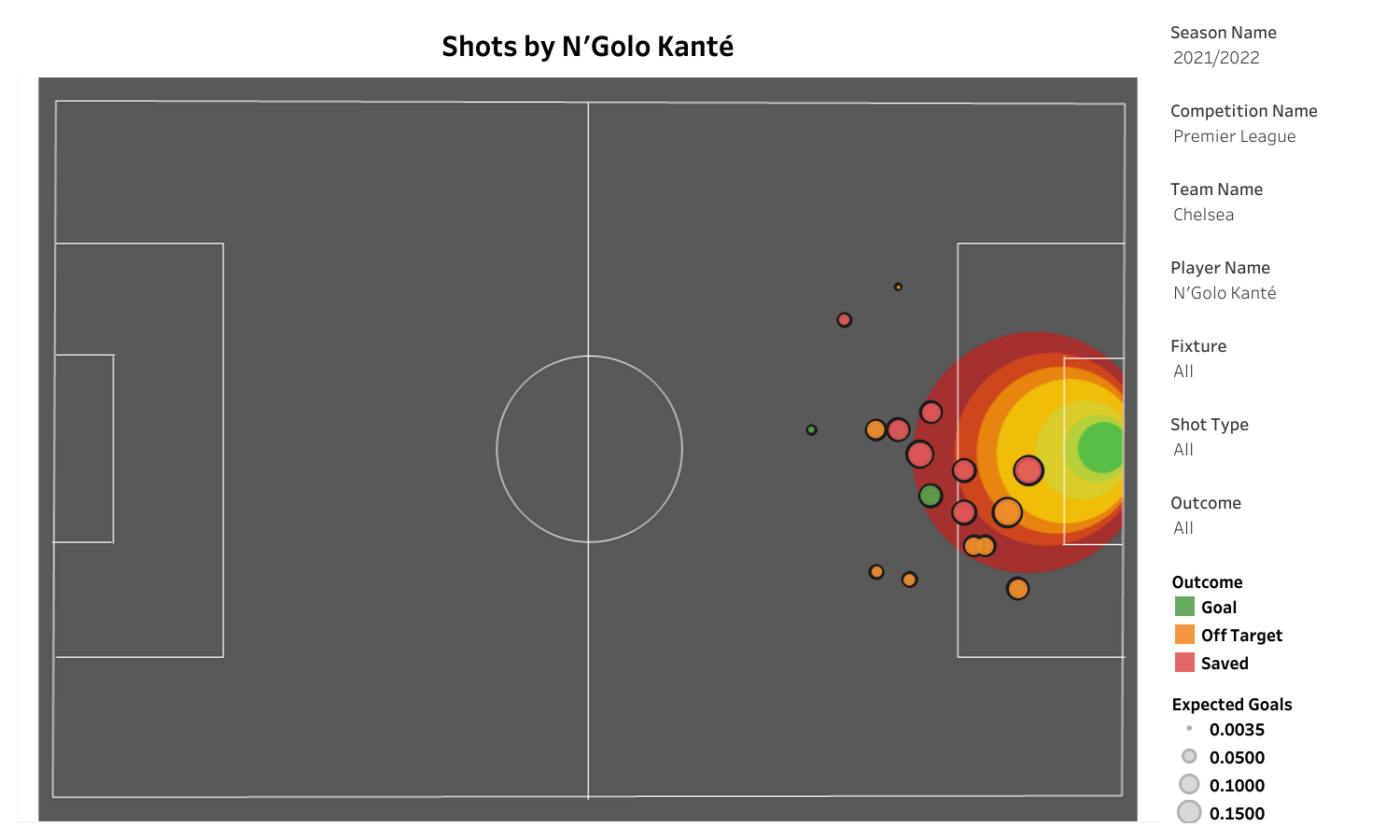 Kanté has improved his attacking side of the game and likes to get involved in attacking plays. He was involved in 5.5 attacking actions per 90 minutes and had a 45.7% success rate. Kanté attempted 17 shots, and his shot accuracy rate was 52.3%. The player scored two goals from outside the penalty box. 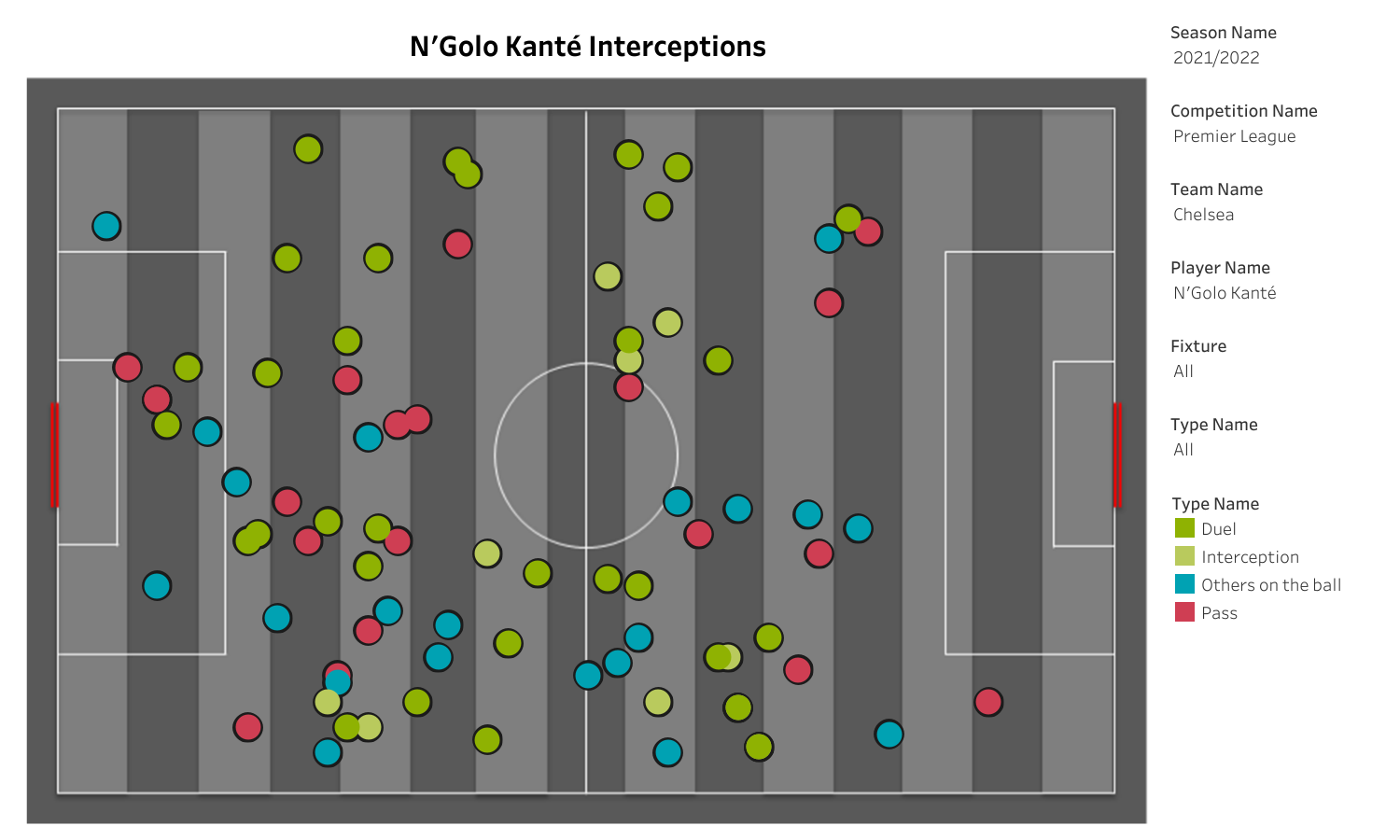 The Frenchman is more known for his defensive side in matches. Last season, Kanté was involved in 10.7 defensive actions and won 78.85% of them. The above viz shows all the interceptions that were made by the midfielder. Kanté averaged 3.9 interceptions per 90 minutes, and most of them were made while contesting a duel. The recovery rate was around eight recoveries per 90 minutes, and half of them were made inside the opposition’s half.

N’Golo Kanté could turn the fortunes of Arsenal. He has won the World Cup, two English Premier League titles and a UEFA Champions League title. Arsenal will make an offer to sign the player. He can add to the attacking and defensive side of the team. However, Kanté may rule out other European clubs interested in signing him.