The mood at the Arsenal camp continues to be ecstatic as the Gunners have now kept three clean sheets in a row and got all nine points in the bag. One thing that continues to stay in the air is news about Aubameyang’s new contract. The player has dropped several cryptic hints on social media but officially nothing has come out. In this piece, we will breakdown what exactly makes Auba such an integral part of the club and why Arsenal need a secondary goal scorer if they want to challenge for the top 4 next year. 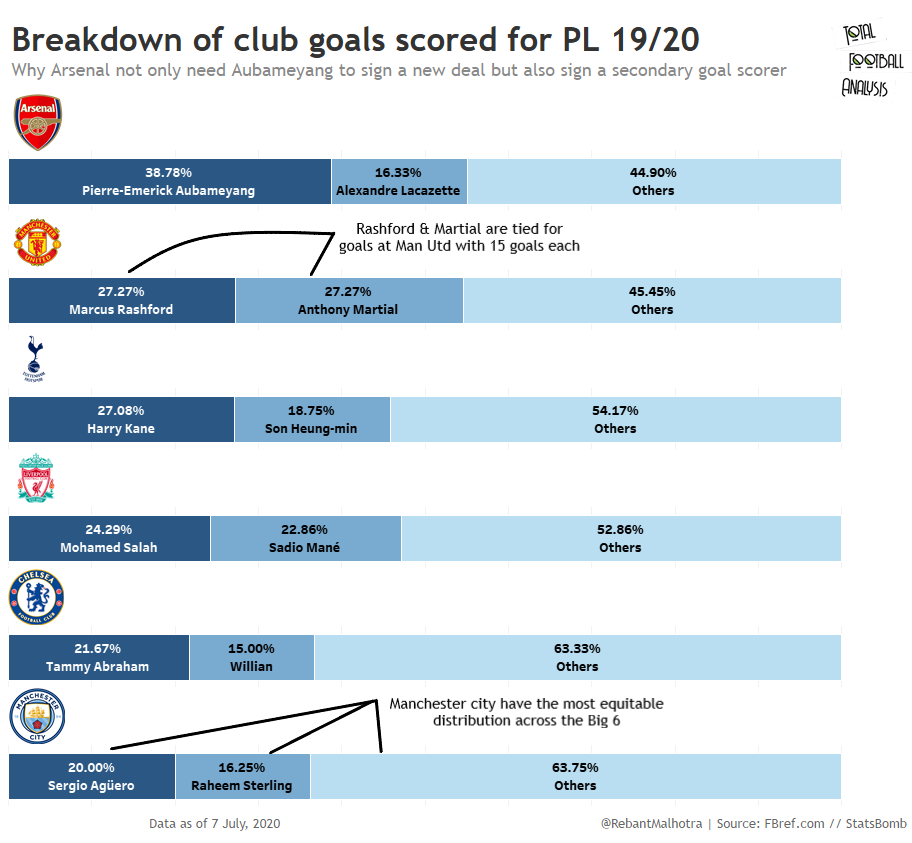 The Arsenal forward is currently #2 in the race for the Golden Boot, trailing Jamie Vardy by two goals. While his xG of 11.77 (as per WyScout) may raise eyebrows and raise questions of whether he’s overperforming, the fact of the matter is that Aubameyang is as lethal a finisher as it gets.

Auba’s ability to play across the frontline makes him an extremely versatile player for a club to have. Despite his primary position as a central striker, the player has mainly been deployed on the wings to allow Nketiah/Lacazette to operate as the #9. Multiple managers at Arsenal have played him in a similar role even though fans continue to raise questions on such a move.

The Gabonese star has scored nearly 40% of all their goals this season, while the next best bet in Lacazette has less than half the number of those goals. This not only shows the glaring need to tie down Auba to a new contract, but also the fact that Arsenal is in dire need of an individual who can share some of the goal scoring burden.

Upon his signing, Nico Pepe was perceived to be the player who would come in as the secondary goal scorer given his past stats and the high fee involved. While Pepe has not set the ground on fire, he currently is second at Arsenal in the PL with 11 goal involvements to his name and it would be fair to say that fans will be expecting much more in the next season.

Arsenal’s dependence on Auba is also highlighted by the fact that he has the highest 90s played in the team, more than the goalkeeper or the centre backs who are usually the players who play the maximum minutes for the team.

With less than a month left on his current deal and the bleak chances of getting a Champions League spot, it will certainly be an uphill task to get him to sign the new contract. However, if rumours are to be believed, Arsenal have already made significant headway into this situation and an official announcement should be around the corner.

Mikel Arteta has publicly claimed that he is optimistic that the player will sign a new deal. While this could potentially be confirmation that the story behind the scenes is positive, it could also perhaps be a power move to put pressure on the board to bring this contract saga to a positive end.

Arsenal and Aubameyang both stand to benefit greatly if they are able to reach a consensus. While Arsenal’s side is clear for all to see, Auba is entering the final stages of his career and would surely be keen on having a last bumper contract before retiring or moving to a less competitive league.