Arsenal are battling other European clubs to acquire the services of former Bayern Munich and Lyon midfielder Corentin Tolisso. The 27-year-old spent five seasons at Bayern Munich and won eight major league titles with them, including a UEFA Champions League trophy. In 2017, he made a big-money move to Bayern Munich in the hope of regular football. Tolisso’s career at Bayern Munich was hit by injuries, and that limited his game-time on the pitch. He spent a lot of time on the treatment table. Bayern Munich signed a few players as backup options for the Frenchman, but those players became regulars in his absence. The player has recovered well from his injuries and is being targeted by a few clubs. Arsenal require a world-class midfielder, and Tolisso could save a lot of money for them. Mikel Arteta has already signed players to improve the weaker areas of the pitch. He is still in pursuit of signing more players that could help him strengthen his chances of silverware next season. Tolisso has been a league winner in the past five seasons and carries a lot of experience alongside him. 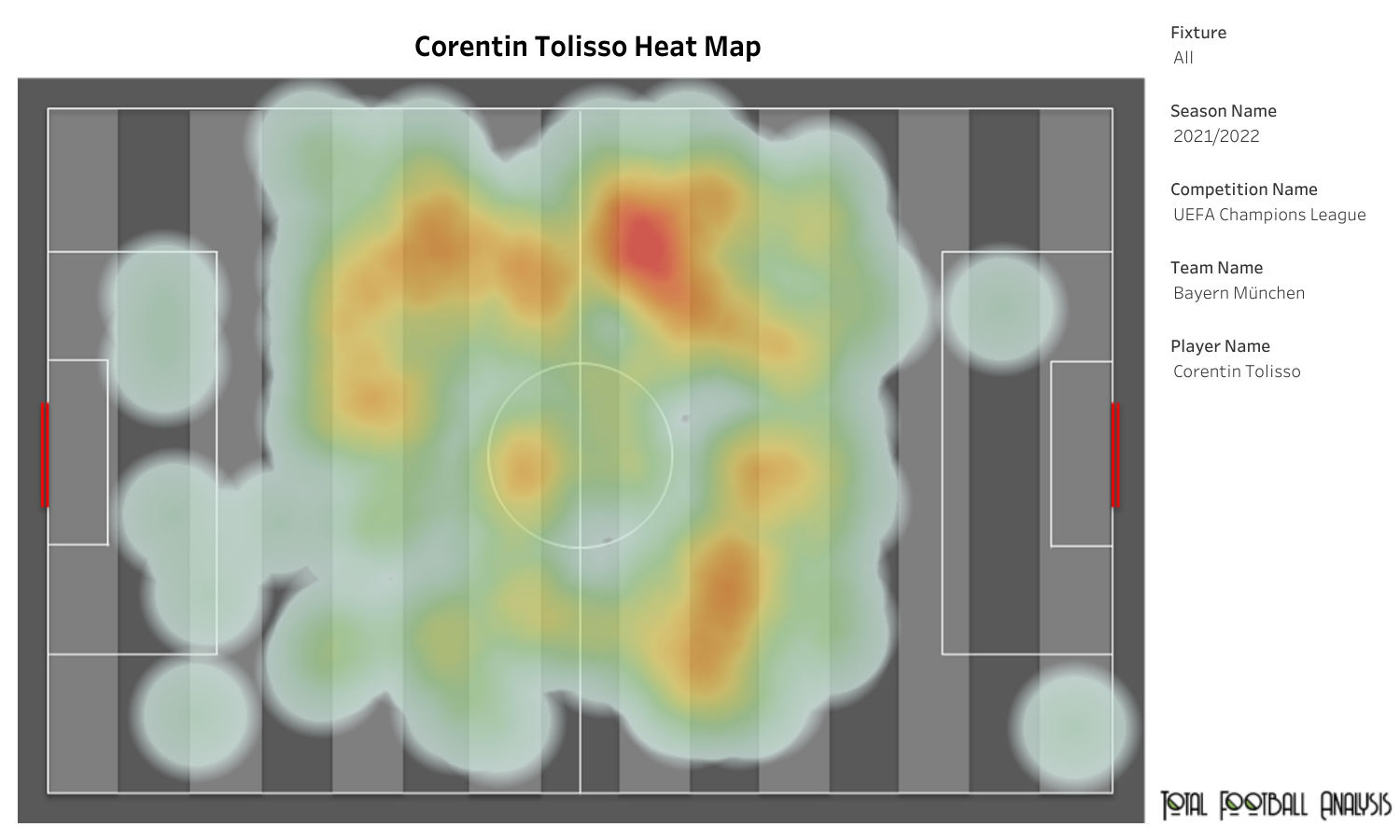 Tolisso made 21 appearances last season, and that included 12 starts. The midfielder scored three goals and helped his teammates score two goals. The above viz shows the heat map of the player in the four UEFA Champions League appearances he made last season. Tolisso dictated the play from the back and made a few runs into the opposition’s penalty box. His average position was in the middle third, and the player also acted as a defensive cover in front of the backline. He plays a role quite similar to Xhaka’s and adds more quality with the ball at his feet. 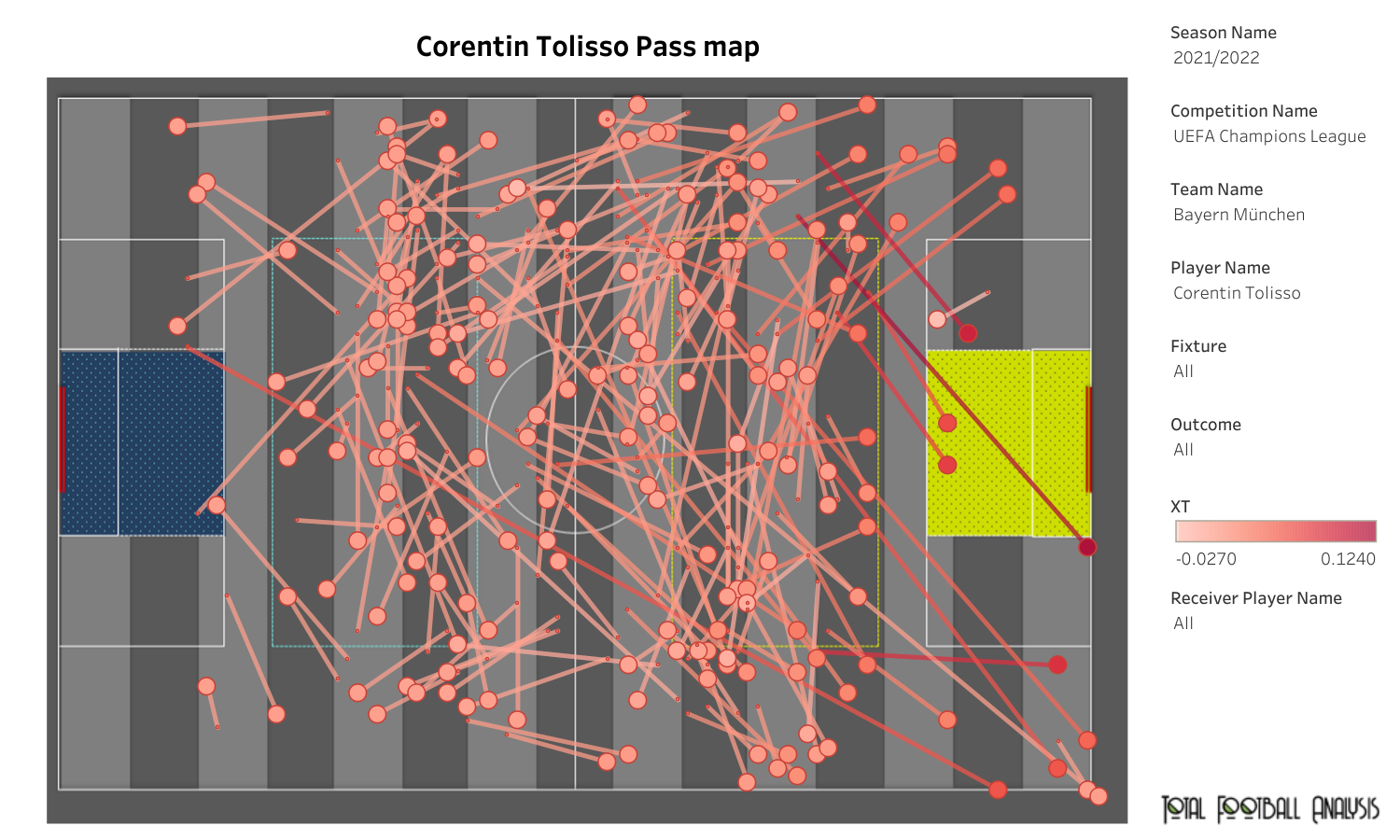 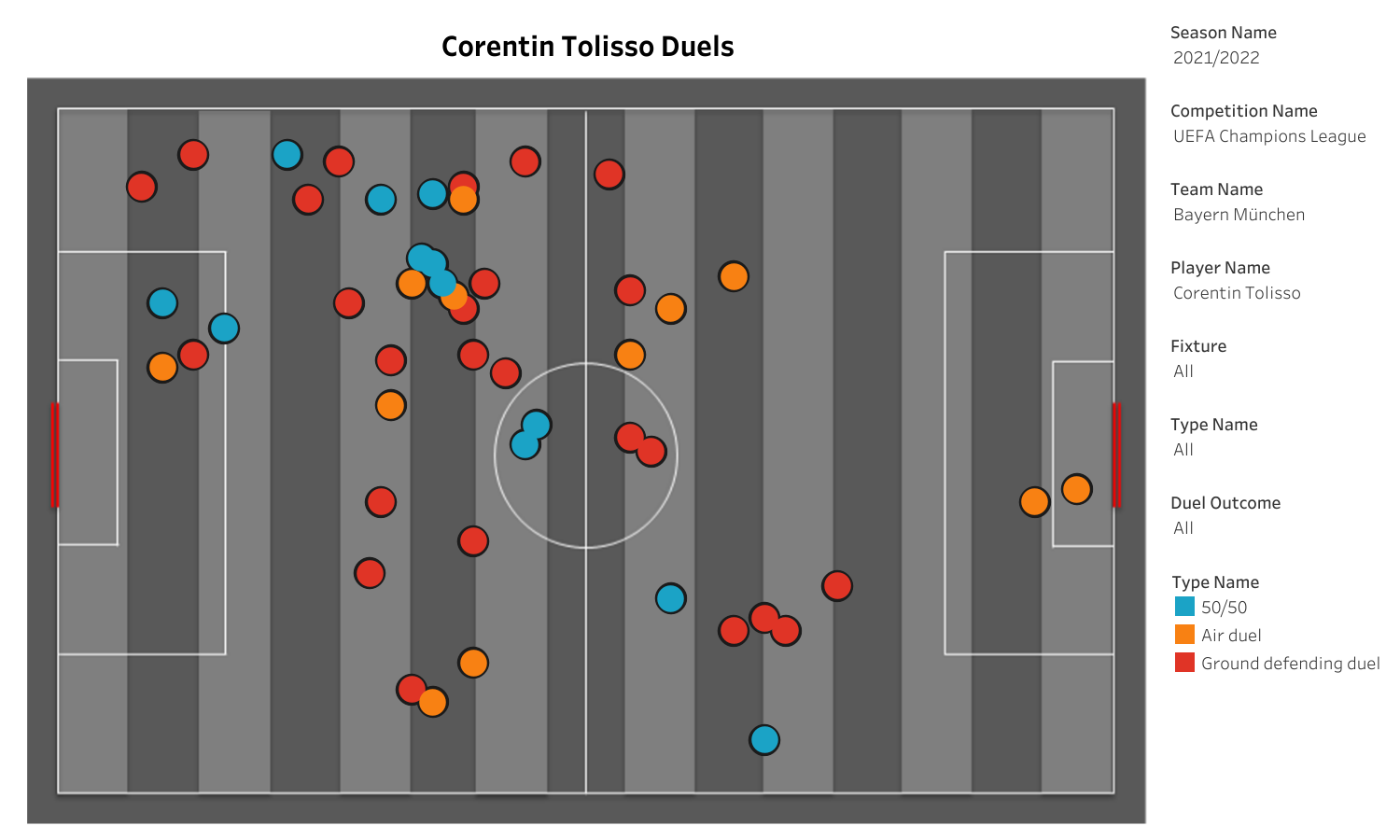 Tolisso was also involved in defensive duties. He contested 11.65 defensive actions with a 72.7% success rate. The 27-year-old was involved in 8.82 defensive duels, 4.24 aerial duels, and 4.24 loose ball duels per 90 minutes. He won 12% of defensive duels, 33.33% of aerial duels, and 41.67% of loose ball duels. Most of the duels were contested in the middle third. Bayern Munich played a very attacking line, and their midfielders contributed a lot to the attack. Tolisso also had a high recovery rate as he averaged 9.5 recoveries per 90 minutes, and 4.9 of them were made inside the opposition’s half.

The Frenchman could become a valuable addition to Mikel Arteta’s side. He brings a lot of experience and is available on a free transfer. Arsenal already have a lot of youngsters leading their attack. Corentin Tolisso will provide midfield stability and assist them in their upcoming long season. Mikel Arteta will look to sign him before other clubs make a move for the free agent.

Under the microscope: What could Tariq Lamptey bring to Arsenal?