Arsenal’s left-back, Kieran Tierney, is regarded as one of the best full-backs in the world. The 24-year-old has struggled with injuries after signing for the English Premier League club. However, he has played more games this season and is attracting the attention of other European powerhouses such as Real Madrid. The Scottish international player has a lot of attacking potential and is highly rated in the Premier League. 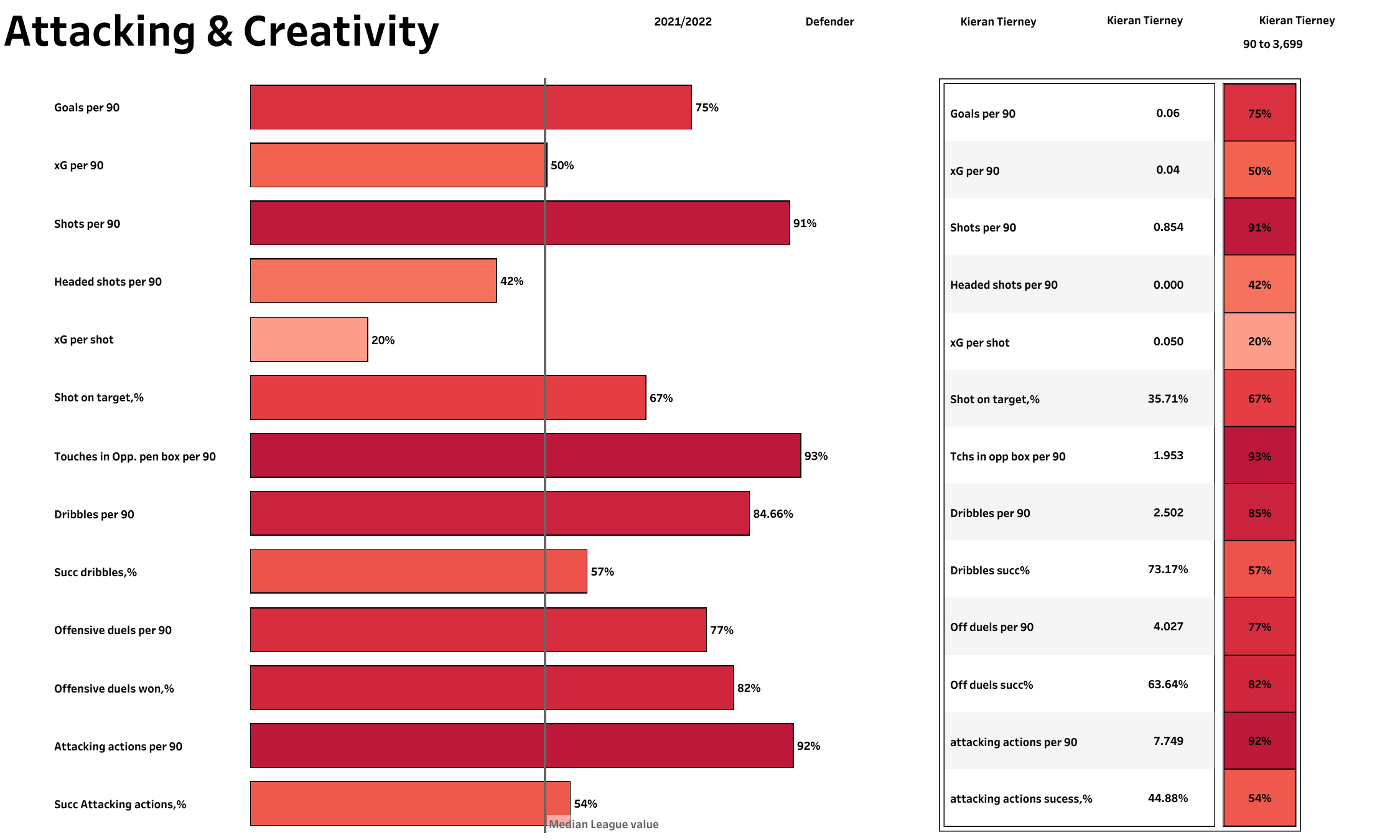 Kieran Tierney has made 16 appearances and has started in all these matches. He has scored one goal and provided an assist. When looking at the above chart, the general rule is that the longer the bar, the better the performance — you can see the league average in the middle, and the % is the percentile rank the player is in. These are in comparison to the other defenders in the league. The full-back has a high percentile rank for shots attempted. He attempted 14 shots towards the opposition’s goal, and five were on target. Five shots out of the 14 shots were attempted from inside the opposition’s penalty box. Tierney has taken 32 touches inside the opposition’s penalty box and averages around two touches per 90. Other than this, the player has a high percentile rank for attacking actions per 90. 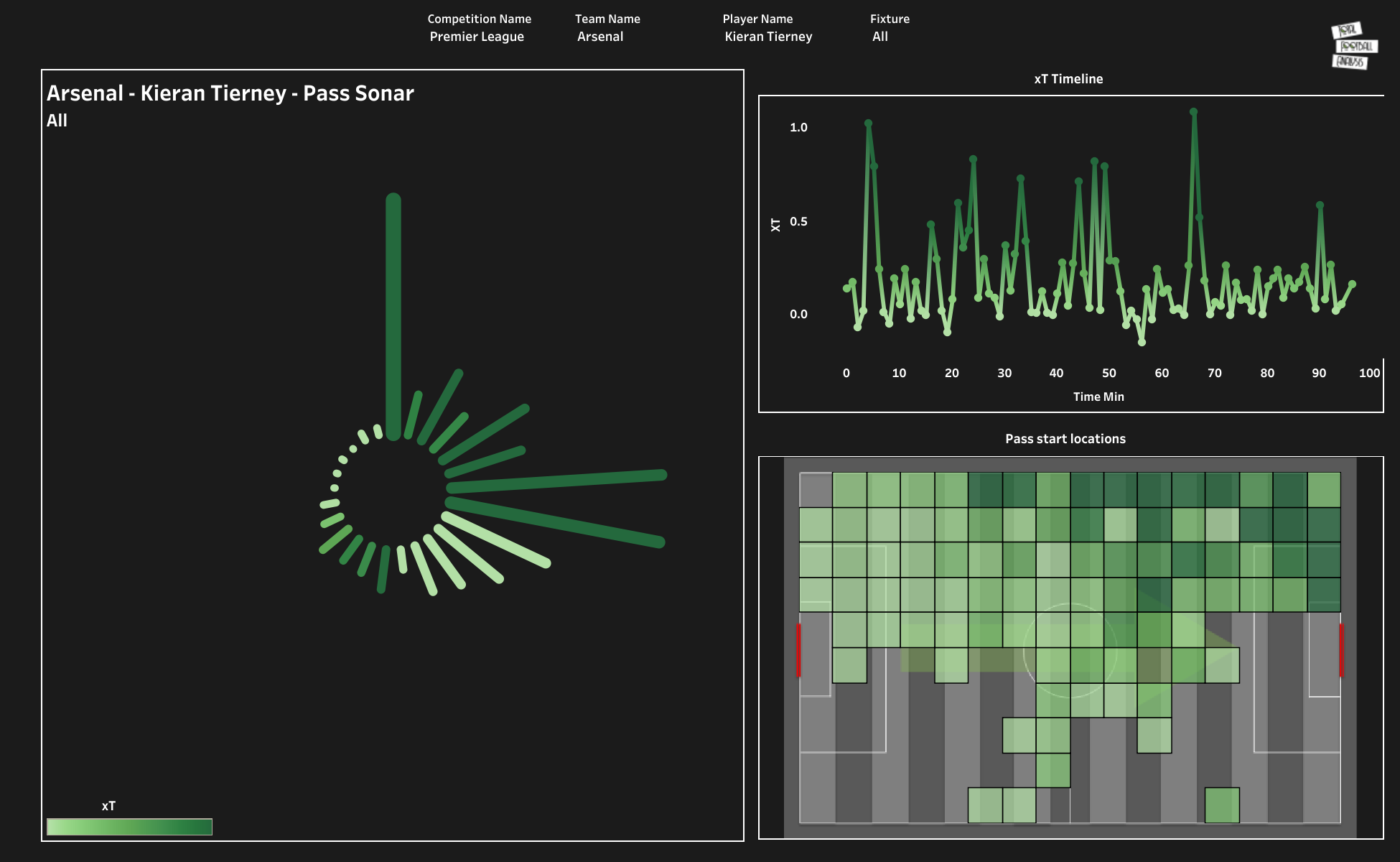 The above viz shows the xT from the passes timeline along with the pass start location of the full-back. Tierney has covered the left side of the pitch and has made full use of the goal-kick line whenever he is attacking. From the xT timeline, we can observe that Tierney created a lot of threats in the first half as compared to the second half. His passing range includes 67 crosses, five smart passes, and six through passes. Most of his passes have been towards centre-back Gabriel. The highest threat rate is created by passes towards Gabriel Martinelli, who plays on the left wing. 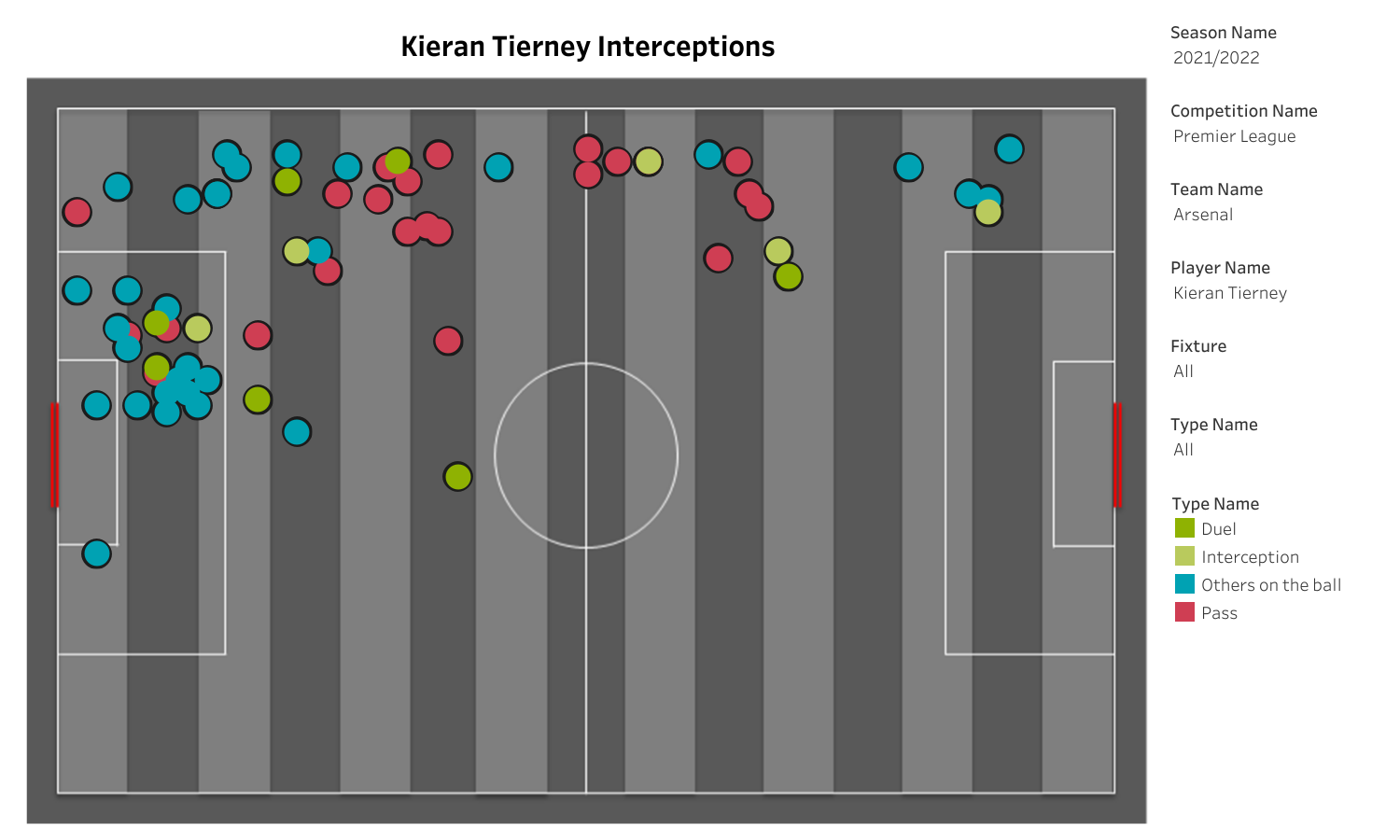 Kieran Tierney has performed well while attacking but has also made a lot of defensive contributions. His team has kept clean sheets in eight of the 16 games he has featured in. The above viz. shows all 66 interceptions that were made by the player. Most of the interceptions were made when other players were on the ball. The full-back also made five interceptions in the attacking third. He has made 103 recoveries, and 42 of them have been made inside the opposition’s half.

Kieran Tierney is a very speedy and attacking full-back. The Scottish international offers a lot with his passing and creates a lot of threats for the Gunners. He has been highly regarded since his Celtic days, and his recent performances have piqued Real Madrid’s interest. If Real Madrid offers him a contract in the summer, he could leave Arsenal.

Marí: A bargain for Arsenal