Arsenal will once again play in the opening fixture of the English Premier League season when they travel to Selhurst Park to take on Crystal Palace. The Gunners played against Brentford in the first game last season and suffered a 0-2 defeat. This time, they would like to start the season on a positive note against Patrick Viera’s Crystal Palace. Both teams were active in the summer transfer window and have made five signings each. Last season, Arsenal missed out on an opportunity to qualify for the UEFA Champions League after finishing fifth in the league table. This time they have made some improvements to the team and will look to finish higher up on the table. 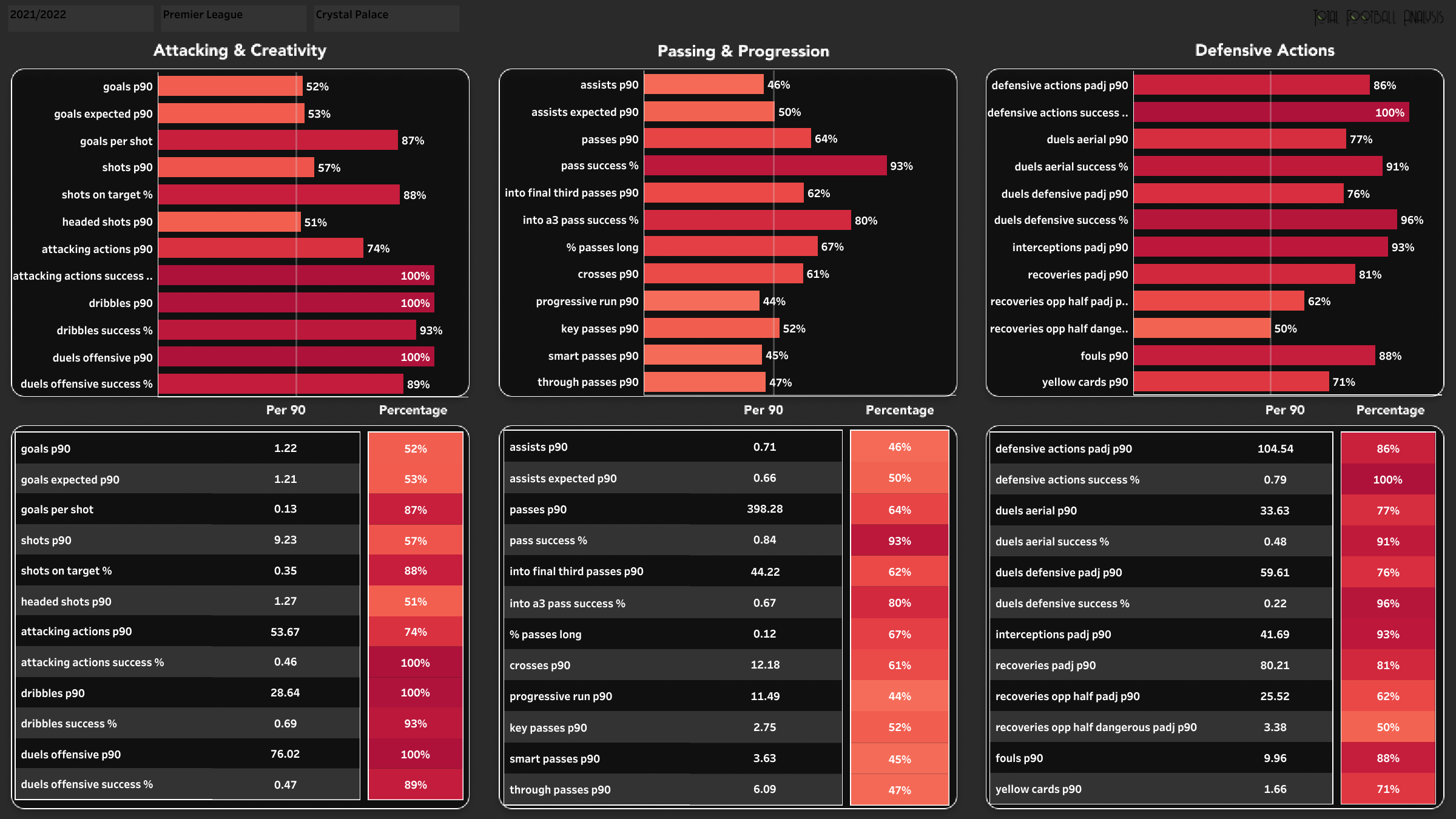 Crystal Palace ended the last season with 11 wins, 15 draws, and 12 losses. They scored 50 goals and conceded 12. The above viz shows the attacking, passing, and defensive stats of Vieira’s team from last season. When looking at the above chart, the general rule is that the longer the bar, the better the performance — you can see the league average in the middle, and the % is the percentile rank the player is in. The attacking actions section shows that the team had a lot of dribbles, and they like to run past the opposition defence. Their passing was decent but the team had less ball possession in most games. Palace had a high success rate for defensive actions and averaged 41 interceptions per 90 minutes. 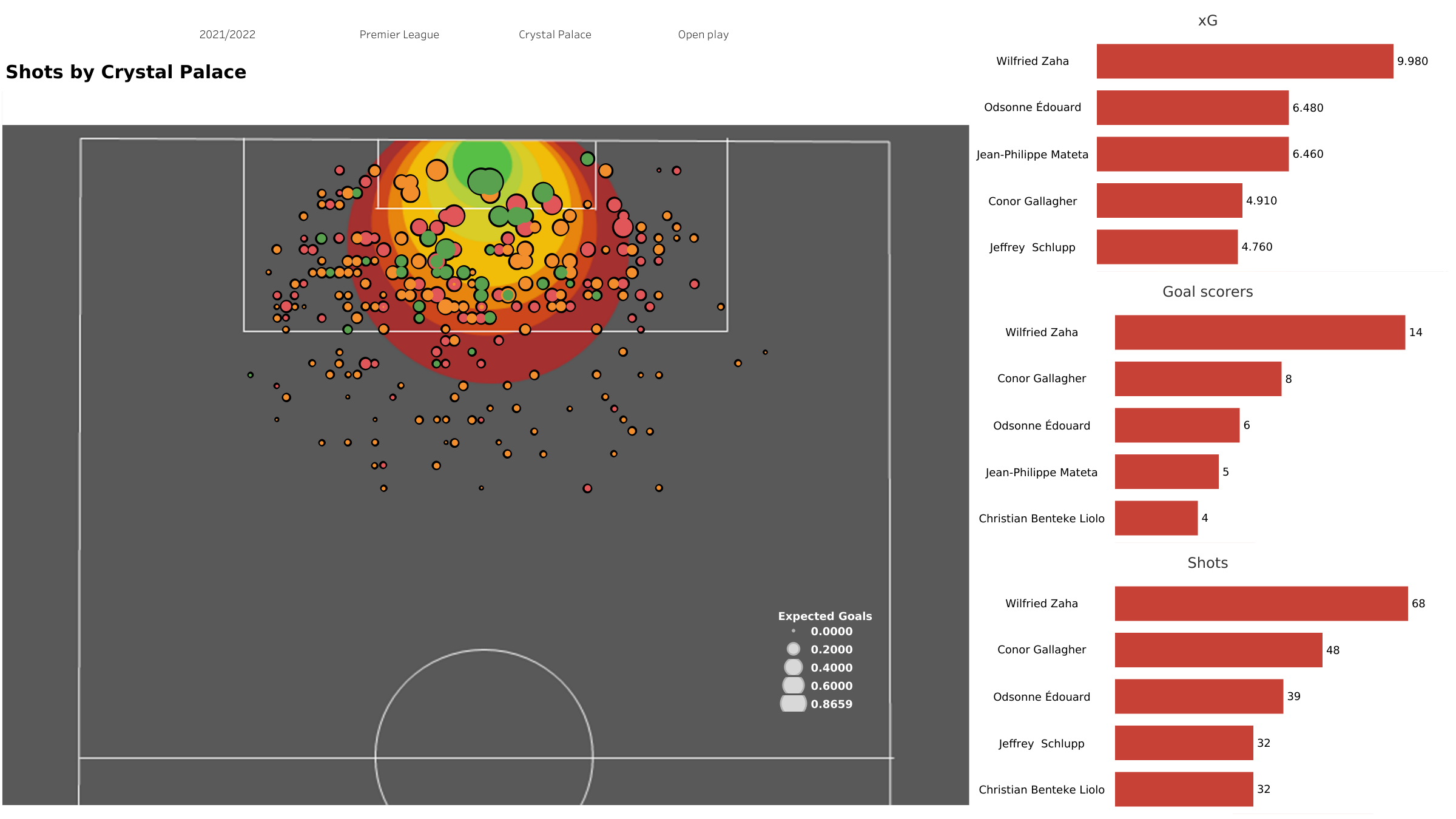 The above viz shows all the shots that were attempted from open play last season. It can be observed that the left side was the most productive side for Palace. Wilfried Zaha operated on the left and was their highest goal scorer and had the most shot attempts towards the opposition goal.

Crystal Palace have injured goalkeepers to deal with as their new signing, Sam Johnstone, is out injured along with Jack Butland. Vicente Guaita is expected to be the last line of defence for the home team. James McArthur and Michael Olise are also out with their respective injuries. This means that Cheick Doucouré could start his first match in the English Premier League. Wilfried Zaha, Jordan Ayew, and Odsonne Édouard are all expected to lead the line for the home team. 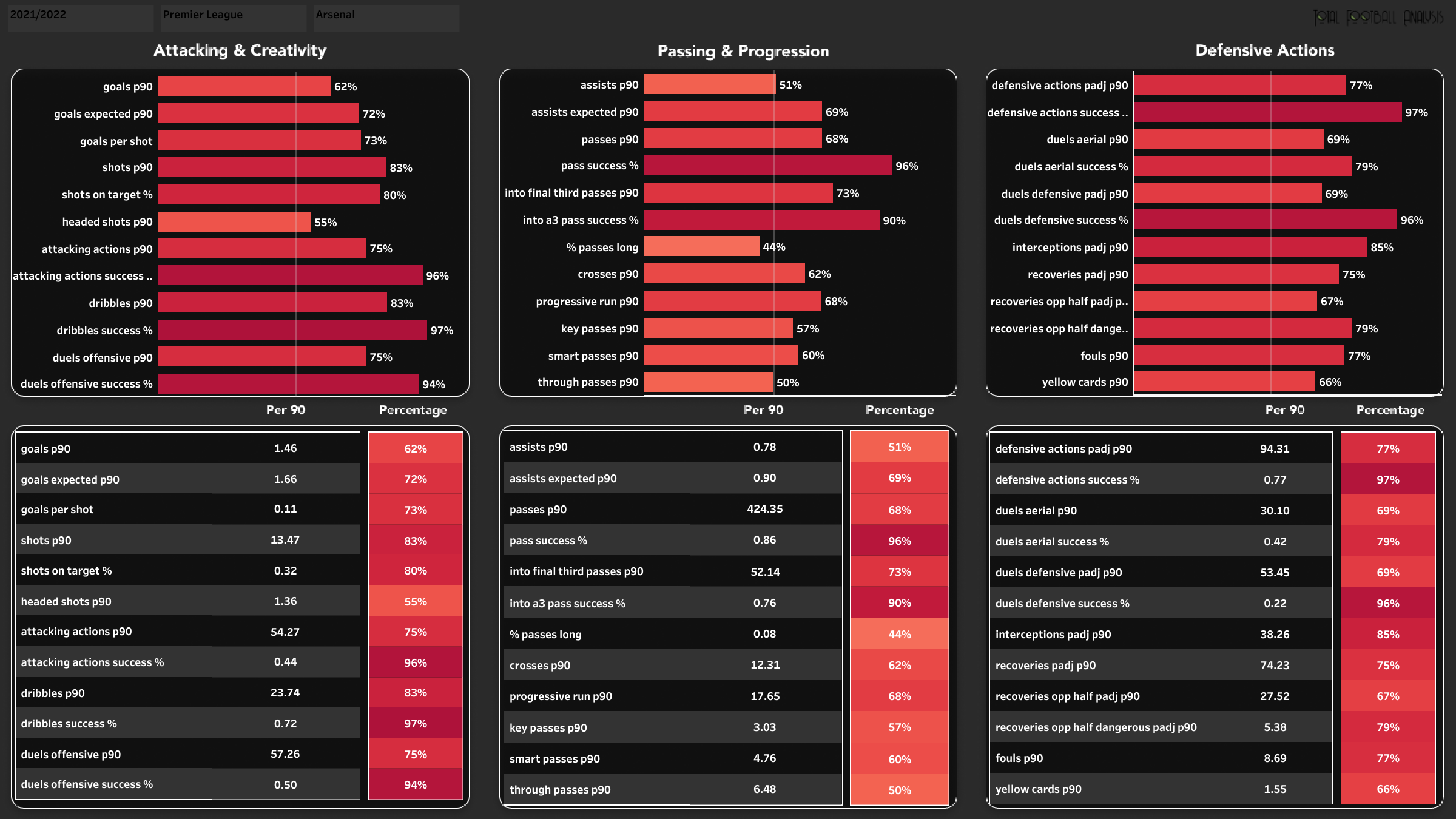 Arsenal, on the other hand, ended the season with 22 wins, three draws, and 13 losses. Mikel Arteta’s men scored 61 goals and conceded 48. The above viz shows that Arsenal were ranked above average in most of the stats. They gave some decent performances and would like to improve their stats in the next season. 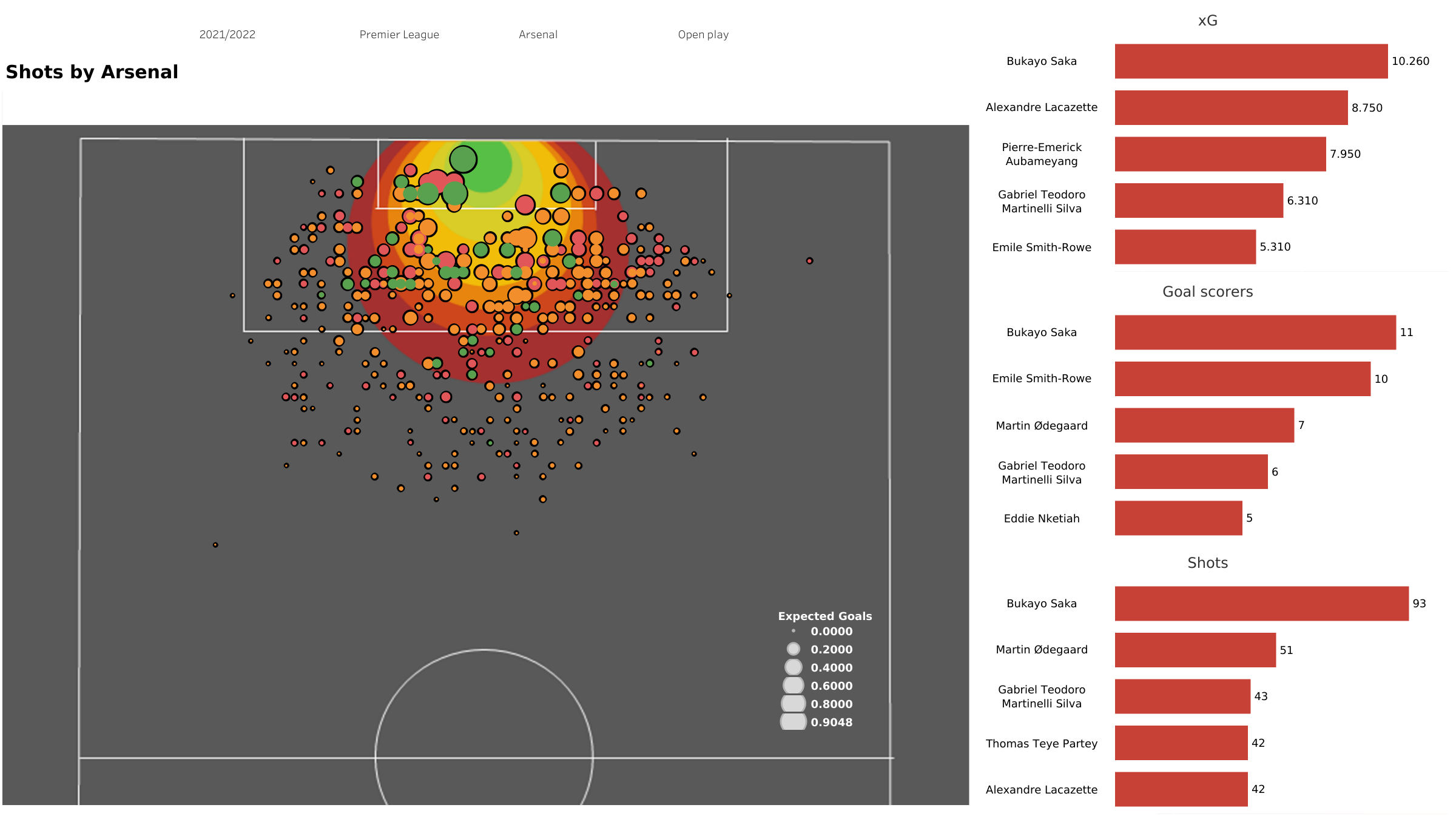 The above viz shows that Arsenal also scored more goals from the left side, but most of the attacks were created on the right. Bukayo Saka, who plays on the right side, attempted the most shots and was their top goal scorer. Martin Ødegaard attempted the second highest number of shots. He plays the number ten role but drifts towards the right side to support Saka and form a partnership with him. They will be the main playmakers this season and deliver key passes to the new striker, Gabriel Jesus.

Arsenal have a few injury issues as Kieran Tierney, Takehiro Tomiyasu, Emile Smith-Rowe, and Fabio Vieira are all expected to miss this match. Oleksandr Zinchenko and Gabriel Jesus are set to make their first starts for Arsenal in the Premier League along with William Saliba. Arsenal are expected to play in a 4-2-3-1 formation.

The Gunners are yet to beat Crystal Palace under the management of Patrick Vieira. The first meeting between the two teams was at the Emirates Stadium, and the match ended in a 2-2 draw. Arsenal suffered a humiliating 0-3 loss in the reverse fixture. Mikel Arteta will look to start the season on a positive note and complete a double over the former Arsenal captain. Arsenal will start as the favourites to win this match.

‘Trained like an animal’ – Arteta is bringing the best out...