Arsenal will look to return to winning ways when they travel to St. James’ Park to take on Newcastle United in the English Premier League. The Gunners suffered a humiliating 0-3 defeat against their North London rivals Tottenham Hotspur in their last game. This closed the gap between the two teams to one point and left Arsenal with only one option – winning the last two games, if they want to finish in the top four. Newcastle United, on the other hand, suffered back-to-back defeats but have ensured their safety. This is an important match from the Gunners’ point of view, and they need to secure a win to ensure their UEFA Champions League spot.

Newcastle United have won 11, drawn ten, and lost 15 games this season. They lost their last two matches against the top two sides in the league. However, Eddie Howe’s men won their last four games before that, and that secured their safety. The Toons have found the back of the net 40 times this season, with an xG rate of 44.99. In return, they have conceded 61 goals with an xGA rate of 58.26. 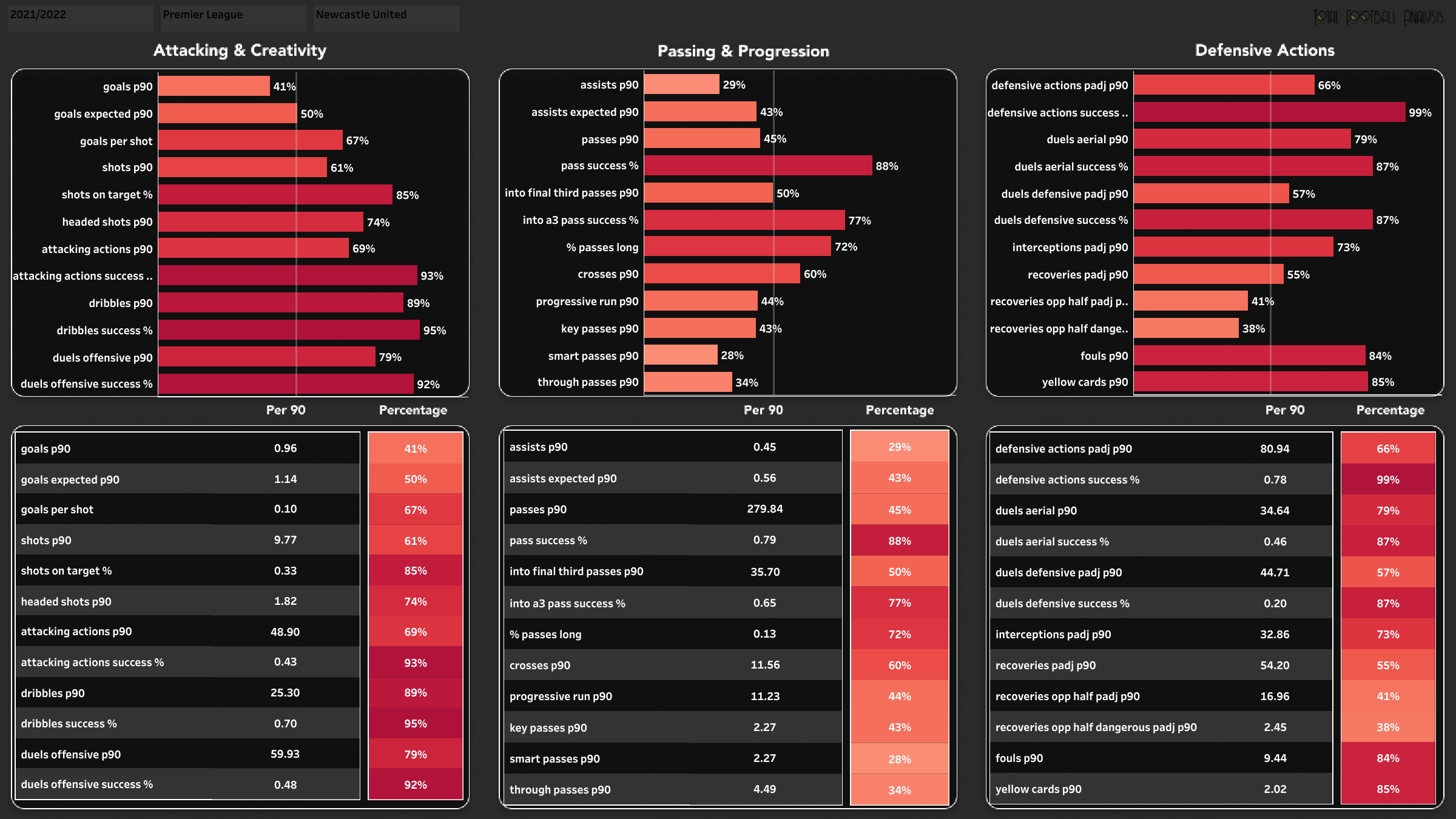 When looking at the above chart, the general rule is that the longer the bar, the better the performance — you can see the league average in the middle, and the % is the percentile rank the player is in. The above viz shows that Newcastle United players have struggled to pass the ball throughout this season. They have attempted fewer passes than the average and have struggled to keep hold of the ball in possession. Newcastle United have a lot of dribblers in their ranks who can create some trouble with their speed and skills on the field. Other than this, the team averages more than nine shots per 90 minutes with a 33% shot accuracy rate. Newcastle’s defence has also contested fewer duels in comparison to the other teams that have conceded more goals.

Jamal Lewis, Jonjo Shelvey, Federico Fernandez, Issac Hayden, and Joe Willock are out injured and will miss this match. However, there is some good news, as Ryan Fraser has returned to training. Kieran Trippier and Callum Wilson have also recovered from injuries and were on the bench in their last game.

Against Spurs, Arsenal lost their 12th game of the season. They have won the other 21 and have only drawn three matches. Mikel Arteta’s men have scored 56 goals with an xG rate of 65.02. Arsenal have conceded 45 goals with an xGA rate of 44.61. 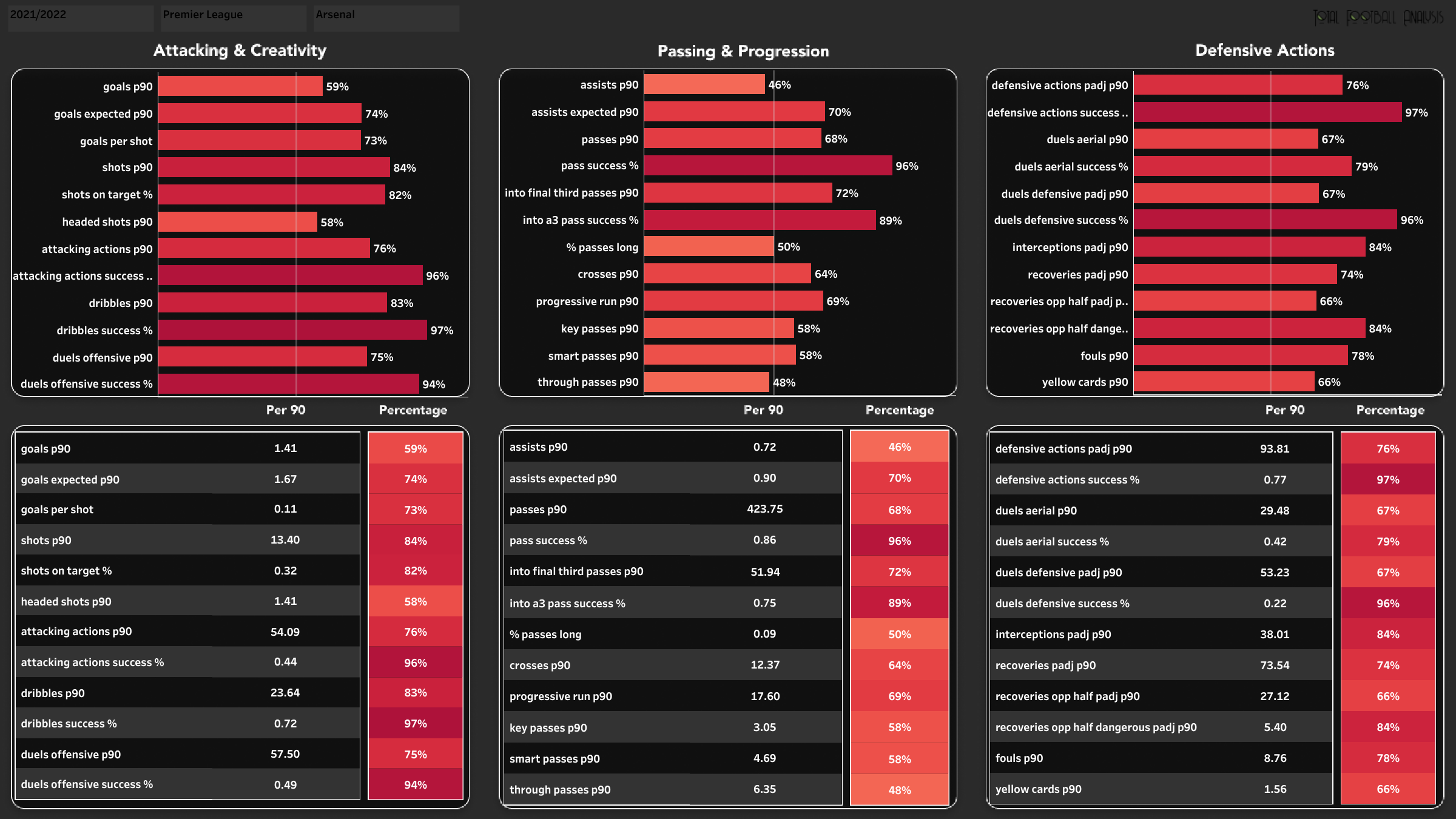 Arsenal will look to bounce back with a win, and once again, take the lead from Spurs. The Gunners have performed better than their opponents in attack, defence, and passing. The Passing & Progression chart shows that the Gunners have performed just above average. They have also struggled to keep the ball in possession and have a comparatively lower rank than the teams who are ranked below them. Defensively, Arsenal have performed better but haven’t kept a clean sheet in their last eight games.

Arsenal have a few injury concerns as Gabriel got injured in the last game and remains doubtful for this match. Thomas Partey and Kieran Tierney are already out. Rob Holding received a red card in the last game, leaving Mikel Arteta with few defensive options on their side.

The Gunners will look to bounce back with a win over Newcastle United. They have won the last five meetings between the two teams. However, it won’t be easy for the Gunners to take three points away from home, and they will have to dig in hard to obtain three points.

Xhaka would think twice if he was asked to captain his...