In the second North London Derby of the season, Arsenal travel to the Tottenham Hotspur Stadium to take on their rivals in the English Premier League. Both teams are separated by four points in the league table, with Arsenal sitting one place above their rivals in the league standings. Arsenal are currently in the UEFA Champions League spots and won the reverse fixture by a scoreline of 3-1.

Antonio Conte’s men gave an impressive performance against Liverpool away at Anfield and took a point from that game. This was their fifth draw of the season, and the other 30 matches have ended in 19 wins and 11 losses. Spurs have scored 60 goals and conceded 40. They have an xG rate of 55.24 and an xGA rate of 44.69. 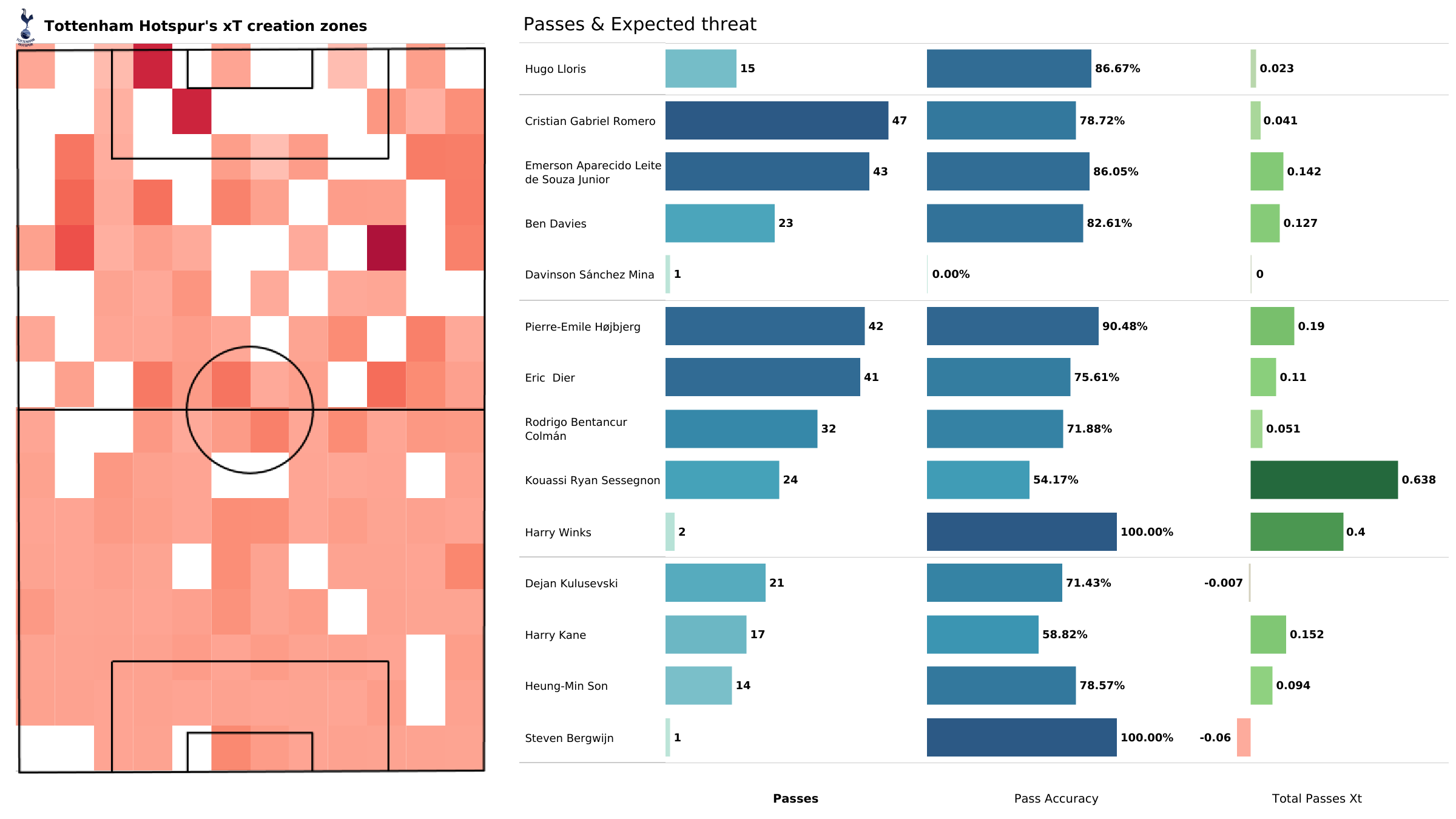 The above chart shows the xT creation map from their previous match. Spurs have attacked from all over the place, especially from the centre and the right side. Ryan Sessegnon was impressive from the left wing-back position and created the highest threat rate for his team. Spurs attempted seven shots and managed to hit the target three times. Their xG rate was 1.24, and they also created four counterattacks. 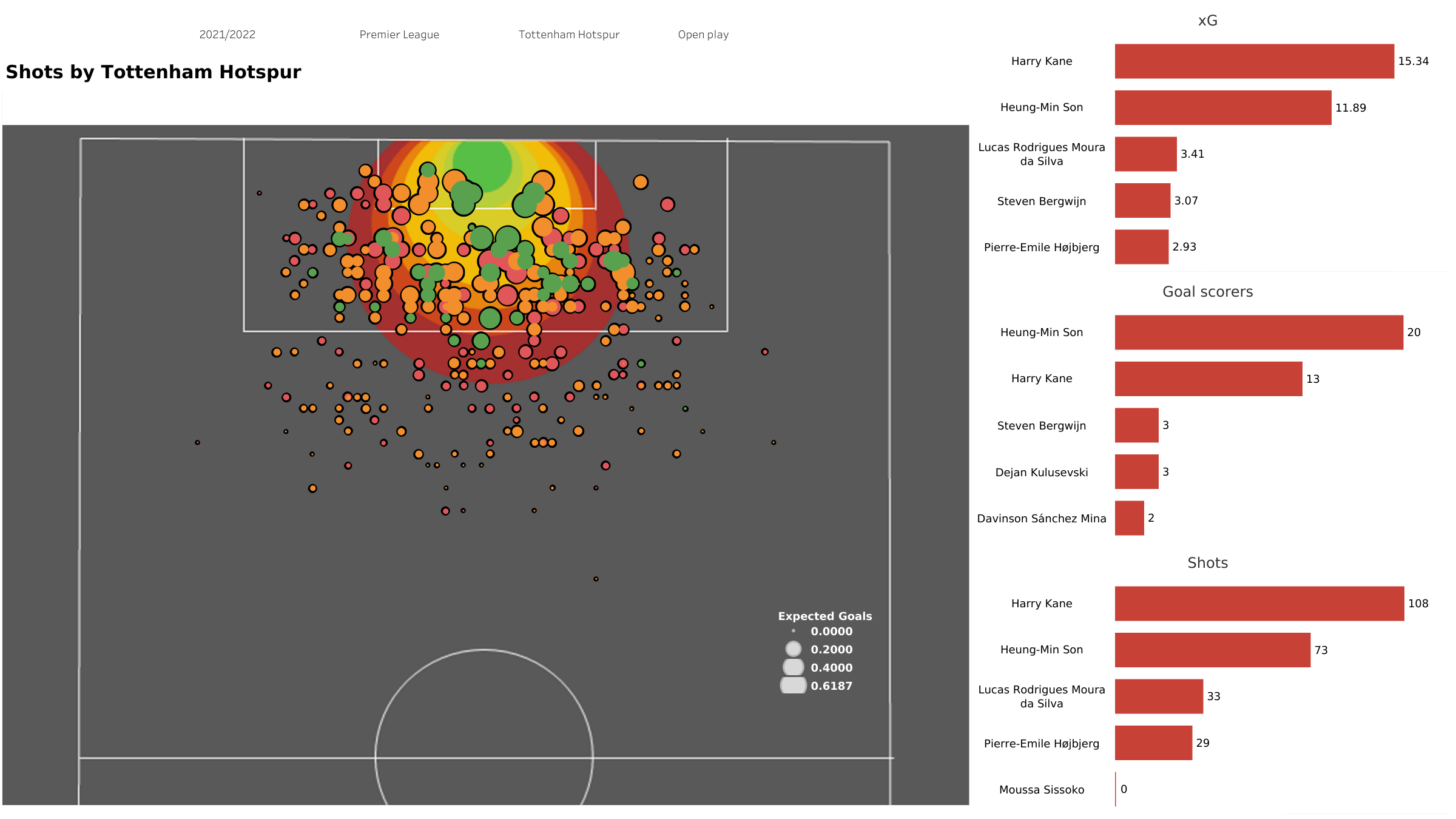 Tottenham Hotspur have attempted 413 shots, averaging 10.9 shots per 90 minutes. They have managed to hit the target 172 times, with a shooting accuracy rate of 41.65%. Of the 413 shots, Spurs attempted 255 from inside the opposition’s penalty box, with 117 of them being on target. The above map shows all the shots attempted from open play by Conte’s men. We can observe that Spurs like to get the ball inside the box and have scored most of their goals from the centre. They have taken 667 touches inside the opposition’s penalty box, with an average of 17.6 touches per 90 minutes.

Antonio Conte’s side could go with the same starting line-up that started against Liverpool. They played with a three-man defence consisting of Ben Davies, Eric Dier, and Christian Romero. Ryan Sessegnon and Emerson Royal were the two wing-backs on the team. Harry Kane and Son Heung-Min have found a new attacking partner in the form of Dejan Kulusevski, and the Swede is likely to start this match.

Arsenal registered their fourth consecutive win in the league against Leeds United. They have now won 21, drawn three, and lost 11 games this season. Mikel Arteta’s men have scored 56 goals with an xG rate of 64.68. In return, they have conceded 42 goals with an xGA rate of 41.92. 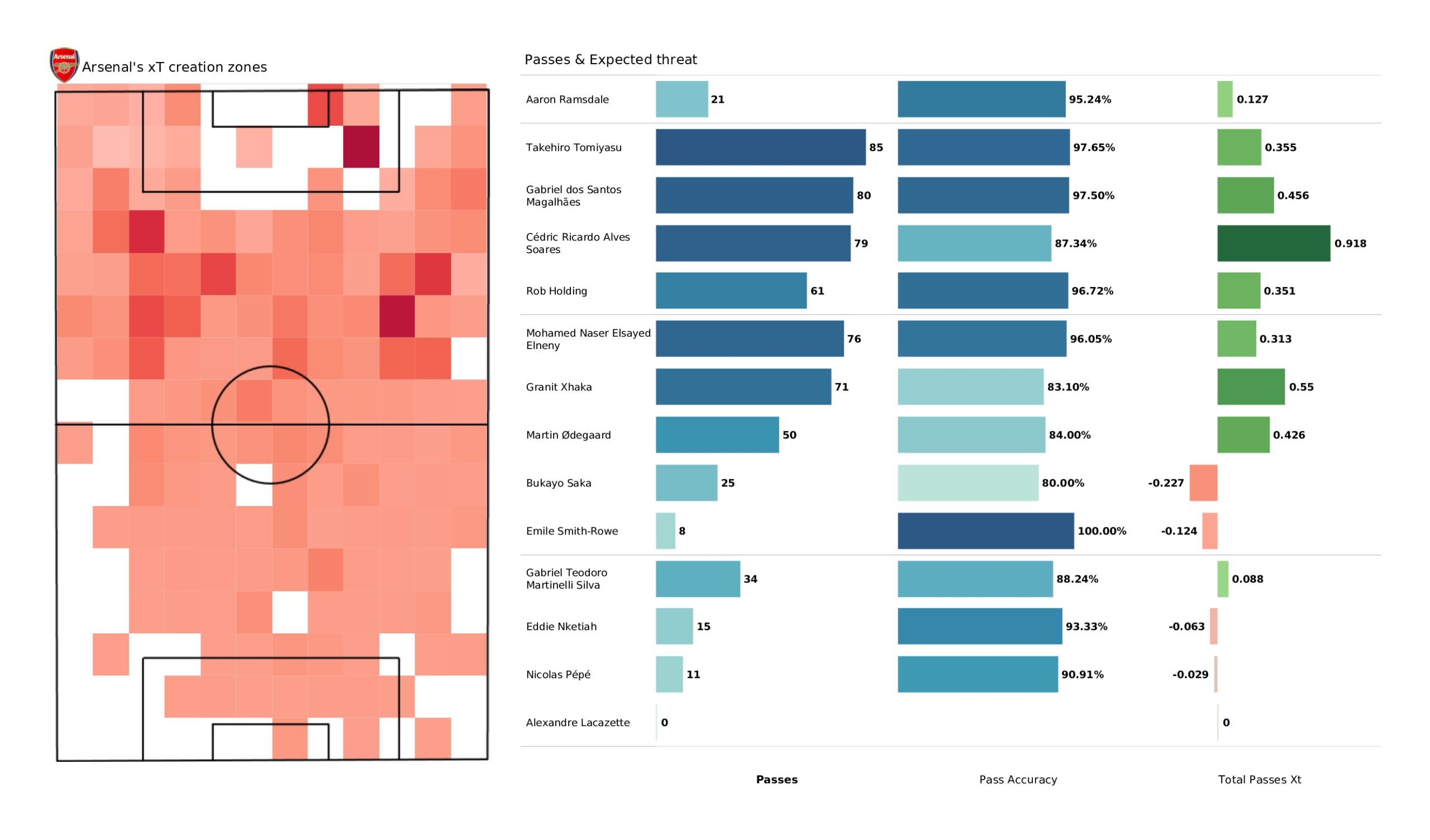 The Gunners registered a 2-1 win against Leeds United in their last game. They attempted 47 positional attacks and attempted 18 shots. The above map shows that Arsenal created threats from the wider sides. Right-back Cedric Soares created the highest threat rate from passes. Arsenal created an xG rate of 3.03 and were dominant in the whole match. 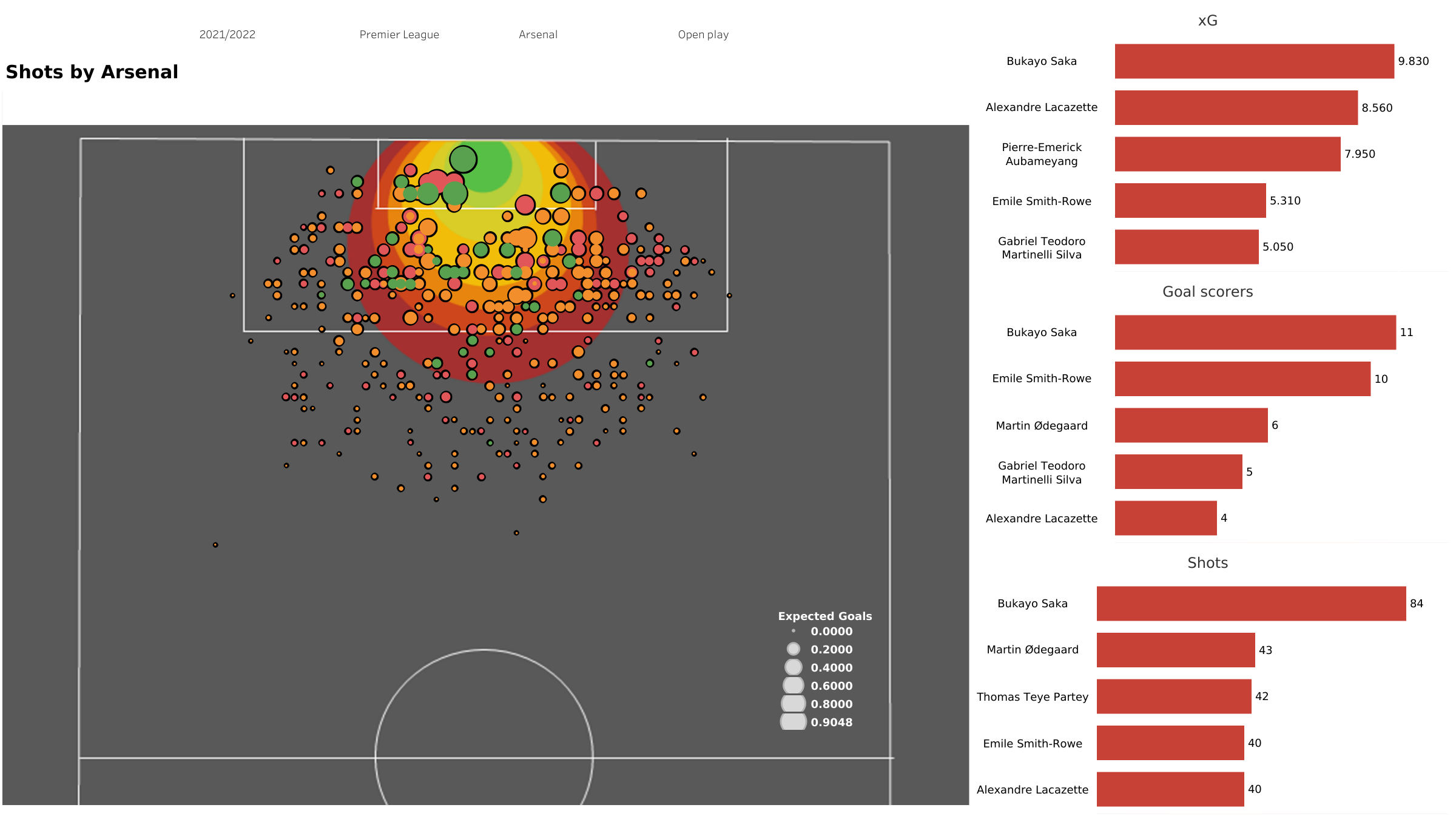 Arsenal have attempted the third-highest number of shots in the league this season. The Gunners have attempted 514 shots and have managed to hit the target 179 times. They average around 13.5 shots per 90 minutes. Mikel Arteta’s men have scored fewer goals from open play when compared to their opponents and have attempted more shots from the wider areas. They have taken 779 touches inside the opposition’s penalty box with an average of 20.5 touches per 90 minutes.

Ben White has missed the last two games for Gunners, and his inclusion is still a doubt. Bukayo Saka was also forced off in the last game, and the Gunners will assess his situation. Takehiro Tomiyasu is expected to continue in the left-back position for his side.

This is a crucial game between the two teams, with Arsenal having an edge over their opponents. Tottenham Hotspur cannot afford to lose this game, as a loss would mean they would be out of the UEFA Champions League qualification race. A win or a point for Arsenal could be a step closer to UCL qualification.

Under the microscope: Fabio Vieira – With his creativity from the...