Preorder Football Manager 2023 through our friends at Fanatical and get 30% off by using the code FM23DAILY.

With the release of Football Manager 2023 just over the horizon, I figured it was time to start to look ahead at the Arsenal side that would make up my first save game on the new iteration. Whilst a few of the new features are yet to be announced, the introduction of UEFA licensed competitions is a lovely one that will make my first season Europa League triumph all the sweeter! Of course, all players will be likely to be differently rated in terms of both Current Ability and Potential Ability, so take each evaluation with a pinch of salt!

An exciting young side loaded with potential, Arteta has led the Gunners to an excellent start this season, and I will be looking to continue in the same vein with a possession-based system that is easy on the eye, but capable of providing quick counterattacks to take advantage of the pace of the wingers. For this first look evaluation I’m not going to go into the specifics of what player roles etc I’m looking on playing each player in, just a more general overview, as I will be diving a little deeper into developing my tactic over the next couple of weeks.

On the face of it, Arsenal have a very young side, with the players providing the experience unlikely to feature that heavily on a weakly basis. This may be an issue that I look to solve early doors by bringing in a couple of older heads, but I do tend to keep quite a young squad anyway, so I guess we’ll just play that by ear once the game is released and I see just how everybody is rated.

In this squad overview, I’ve taken the squad from Transfermarkt, so there may be a few younger players who may feature that haven’t been included in the squad list for various reasons, such as currently being out on loan (Patino, Rekik etc.), so they won’t be featured in this initial assessment.

Looking at the options in goal for Arsenal in the upcoming season, it’s very likely that Ramsdale maintains his number one spot given his solid first campaign in North London. Given that he is still only 24, he looks like a long-term solution, with new signing Matt Turner providing solid back up.

One of the best about on FM22, it’s likely that he will be given a little boost this time around as well, making him one of the most attractive young keepers on the game, especially given his home-grown status. I think he’ll be an important player for years to come, and it would take a ridiculous offer to tempt me to sell.

A replacement for the departing Bernd Leno, who has joined Fulham, Matt Turner looks as though he won’t do a bad job as back up, and I think he’ll be given a fairly big boost and see his stats level out a bit. While sitting on the Arsenal bench might be a bit of a questionable decision for somebody looking to cement his position as USA number one ahead of the World Cup, he’ll do a job as back up for a season or two. I do prefer to have a young, homegrown keeper as my backup, but that’s just personal preference. 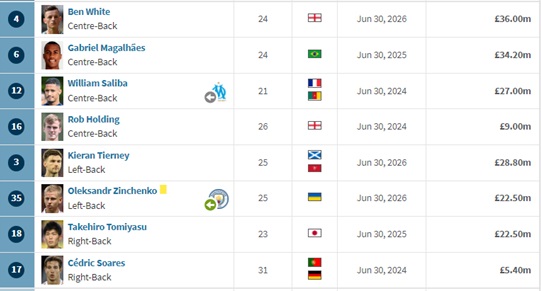 Initial thoughts – there is a lot of versatility here which will come in very useful, with a lot of competition for places. I think Arteta’s preferred centre back partnership of Gabriel and Saliba will prove to be the strongest pairing, especially given the likelihood of Saliba having a very high potential ability. It will be interesting to see how Ben White is rated, as he would be the favourite to take Gabriel’s place. Rob Holding is likely to be fourth choice, but is always a fairly solid option.

At right back it is Tomiyasu’s position to lose, although Ben White might be worth a shout if he can’t dislodge either of the centre halves, depending on what you want from your full backs. Whilst he’ll never be one to rampage down the right flank and whip pin point crosses in, he’ll be solid and keep hold of the ball for you. Cedric will provide back up, and should be a solid enough option, although I don’t think he’ll justify the 65k a week he’s currently on, so might get sold after a year depending which other options are available.

With two very talented left backs now on the books, it’ll be a real battle for the spot (if you are planning on using Zinchenko as a left back). I think Tierney will just about edge it attributes wise, and will naturally provide more width and attacking threat, getting down the left flank and whipping balls across in the mould of a traditional full back, whilst Zinchenko might be a better option for a more possession-based system. 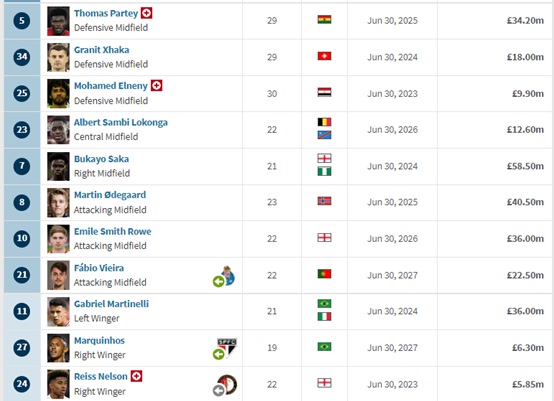 My initial thoughts in terms of formation is that the players are suited most to a 4-2-3-1. The player most suited to being the more defensive of the midfielders would be Thomas Partey, but due to my own reluctance to play (alleged) rapists, I’ll personally be offloading him as soon as possible. Yes, it might just be a computer game, but if you can’t lay down the law with your virtual squad, when can you?

Excluding Partey, the likelihood is that I’ll go with a midfield base of Xhaka and Lokonga to begin with, before possibly looking to retrain Fabio Viera as a Deep Lying Playmaker, allowing Odegaard and Smith-Rowe to compete for the attacking midfield role. With Zinchenko able to play in here, he might be required depending on Lokonga’s attributes this time round, given that he didn’t light the world on fire during his first season at the Emirates.

Odegaard will be first choice to begin with, but Smith-Rowe should develop into a serious player. With Vieira able to play there as well, barring any sales you could potentially go a decade before having to sign a first teamer for this attacking midfield spot.

Out on the right wing, Nicolas Pepe has been shipped off back to France on loan, emphasizing just how abysmal of a signing he was at £72million. This leaves Saka as undisputed first choice, cutting inside onto his left peg. It will be interesting to see how Reiss Nelson is rated following his loan spell at Feyenoord last time out. Whilst he might not make the grade, the young Brazilian Marquinhos is a new arrival from Sao Paulo, and he should have plenty of potential.

On the left wing, Martinelli is the only natural choice, and he is one who has flattered to deceive whenever I’ve managed him before on previous iterations of the game. Given that he’s added more consistency to his game, and his undoubted potential, hopefully this will translate into the game. If you need to rotate a little, Zinchenko again is another option here, or Smith-Rowe drifting inside, or possibly even Tierney if you want an out and out winger.

Given the departure of Aubameyang in January, and Lacazette following him through the exit door six months later, it’s a new look strike force for Arsenal this season. New signing Gabriel Jesus has hit the ground running in real life, freed from Pep’s shackles, and can hopefully replicate this in game. The focal point of the attack, he should be capable of linking the attack together, as well as providing the goods in front of goal.

Nketiah will provide pace off the bench, which could be an important outlet against tiring legs. Hopefully he’ll receive a slight upgrade from last season, when he could be a real handful, and he can provide Jesus with real competition to lead the line.

Under the microscope: How the Saliba and Gabriel partnership has helped...