So just what exactly is going wrong? I popped over to the data hub to have a quick look. 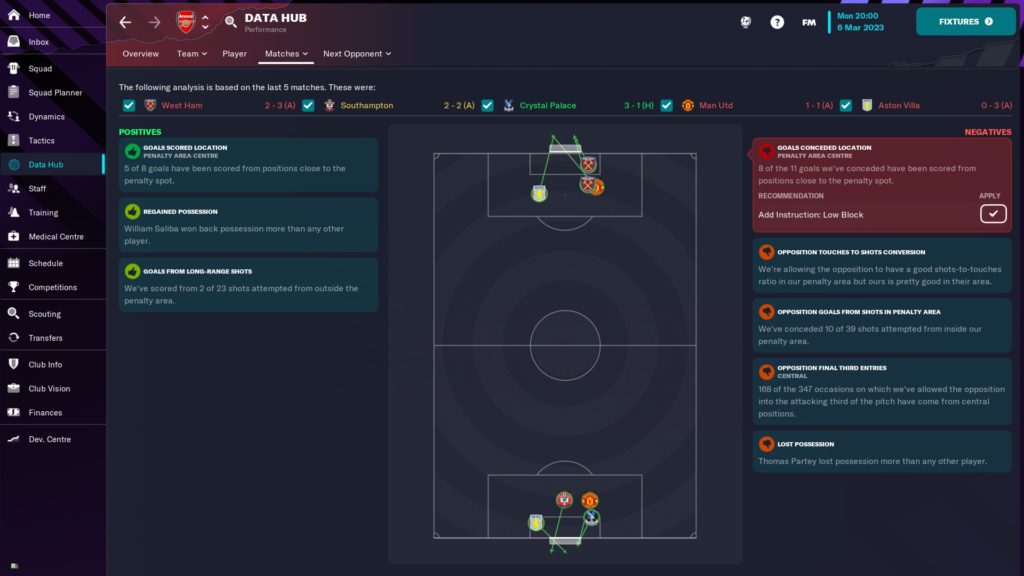 Whilst it is nice to see that William Saliba wins possession back well, and that we’ve scored 2 from 23 long range efforts, I decided to focus on the negatives. First things first, due to conceding a large number of goals from around the penalty area, it’s been recommended that I switch to playing a low block, something that I’ve never really done before on FM, being more of a rock’n’roll gegenpressing Jurgen Klopp wannabe myself.

However, there’s a first time for everything, and I’ll do as I’m told, and switch to a low block.

This, in FM terms, essentially means that my defenders will wait for the opposition to come towards them before pressing. Attackers look to block rather than engaging with the opposition and will drop deeper, how the likes of Dyche’s Burnley stereotypically would function.

Whilst it may not seem like a big change, it will mean that my players will invite pressure onto us, and as a result I’ll be looking to shift my playing style to a more counter attacking system rather than dominating possession (as I have been). I’ll be focusing on remaining compact and protecting my penalty area before transitioning forwards at pace. I’m hoping that the likes of Saka (who has struggled slightly for form) and Martinelli will relish this prospect.

I’m aiming for this to just be a short-term solution to my problems, and once I stop conceding as many goals and hopefully pick up a few more points, I’ll be looking to possibly experiment with a mid-block – a nice compromise between my high press and the low block I’ll be trialling. 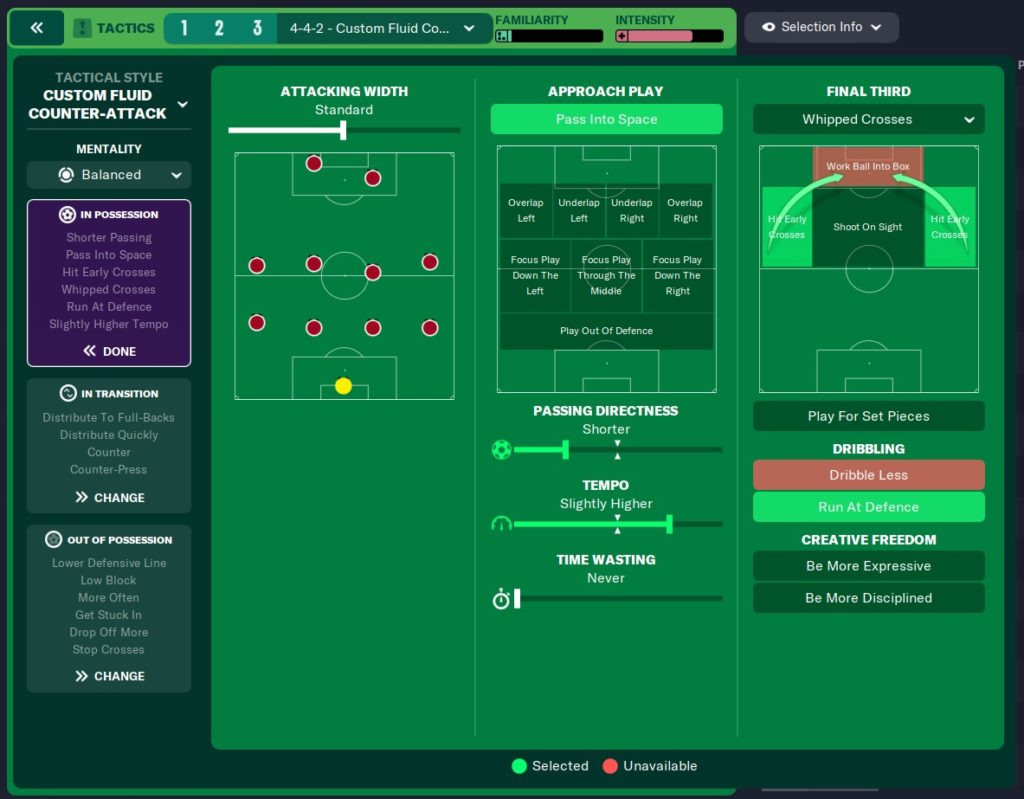 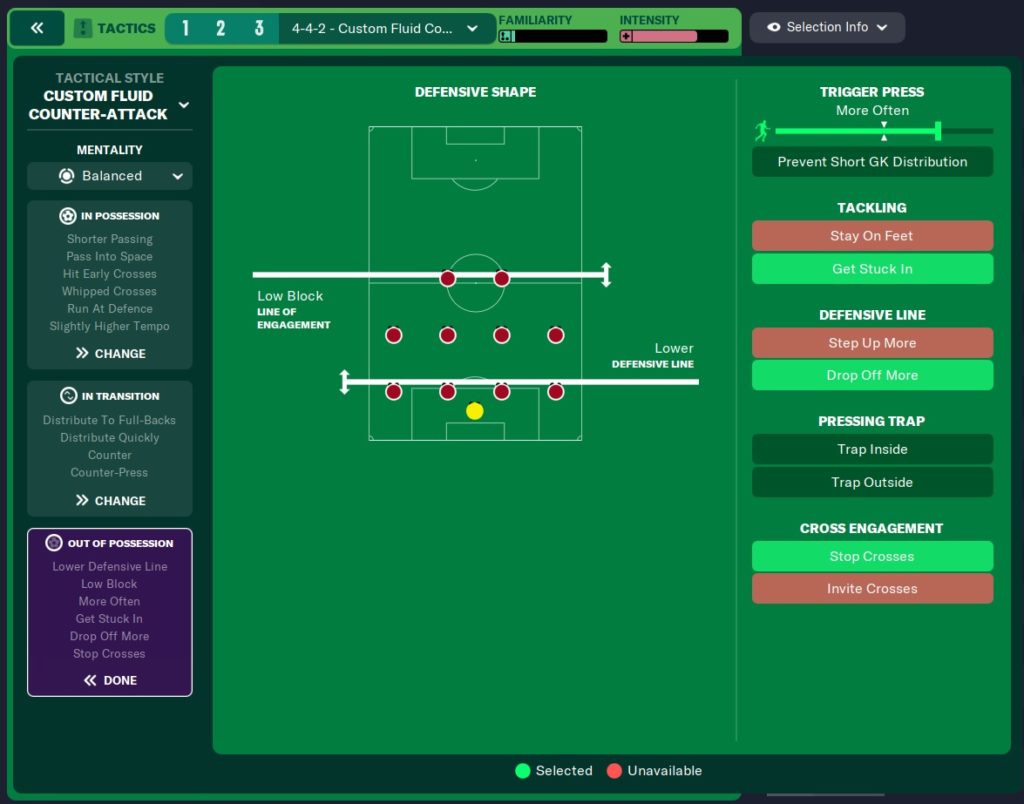 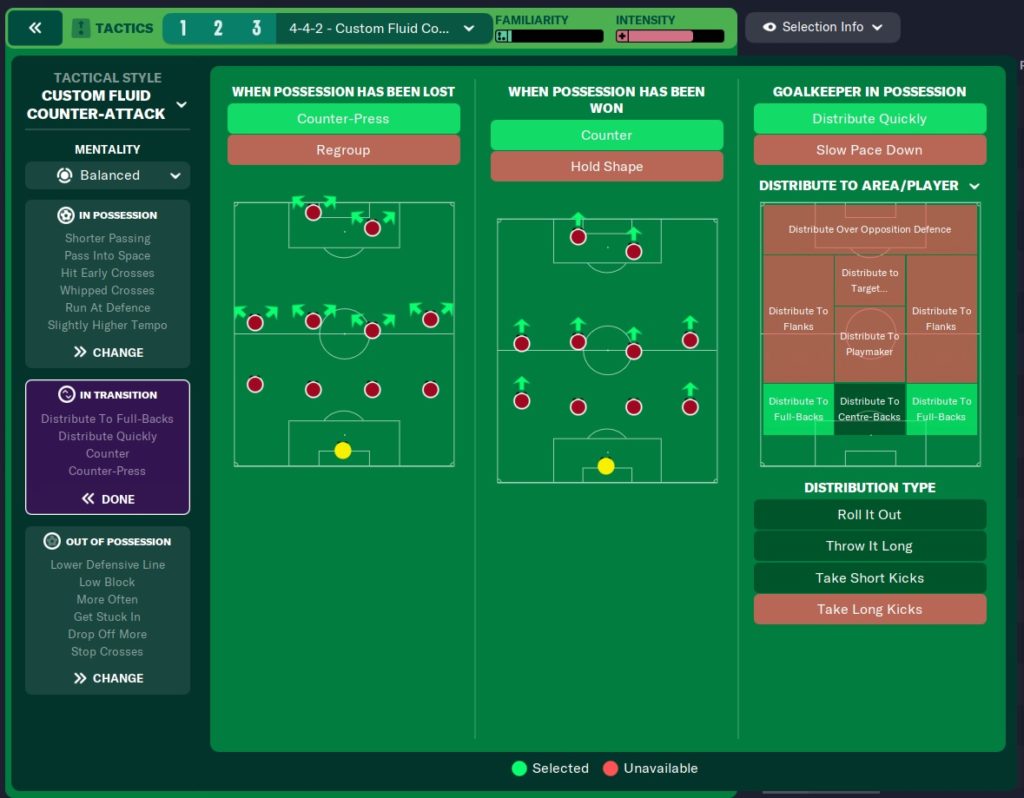 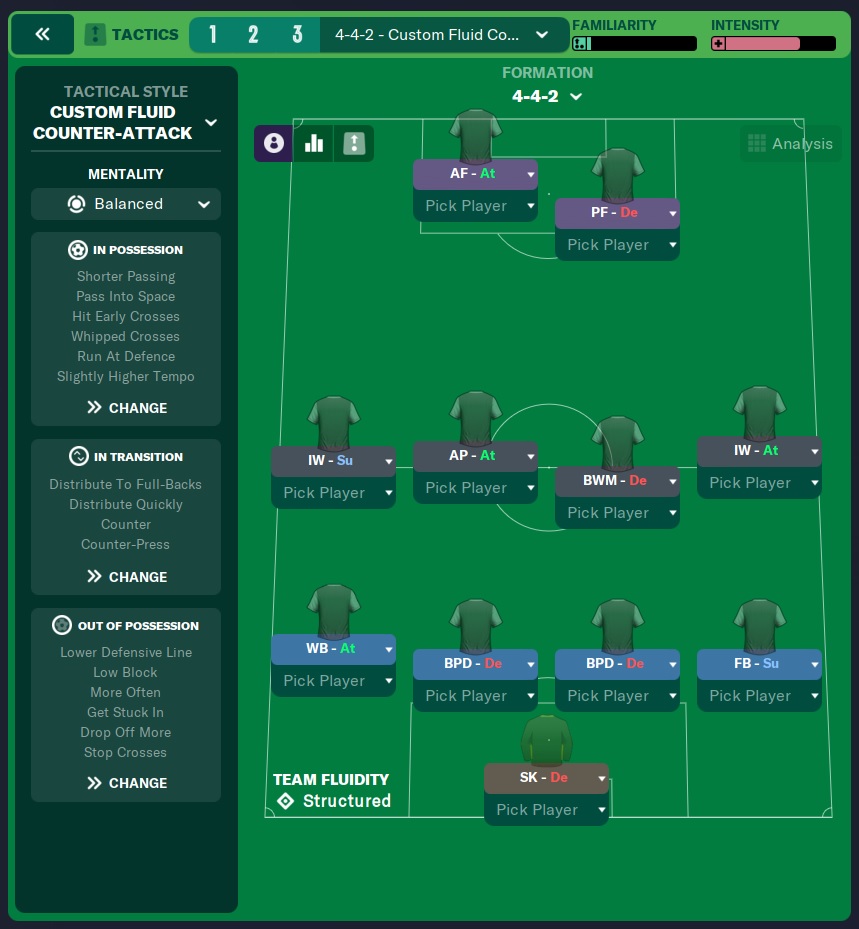 So this is what my tactic looks like at the moment. I decided to stick with my 4-4-2 shape, although I might make some tweaks and switch to a 4-2-3-1 after I see how we go. It resembles something a little like a traditional counter, but I’ve kept the passing shorter and sharper rather than opting to go direct early.

I suppose then, there’s nothing left other than to crack on with it. Next up is a Europa League Round of 16 clash against Celtic which everybody seems very confident about: 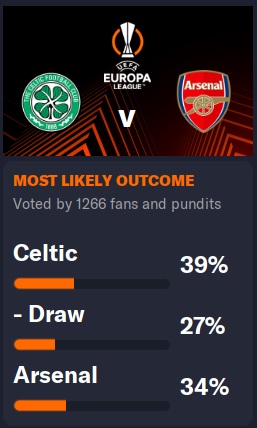 It will be interesting to see how the game develops against a side that I’d realistically expect us to beat, despite what those 1266 fans and pundits reckon. 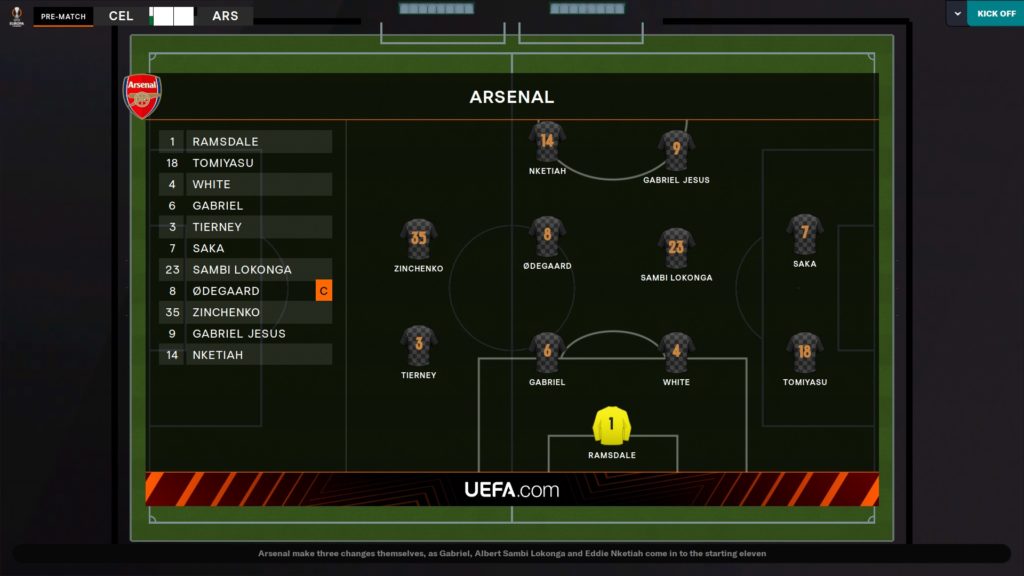 As the line up is announced and the Europa League music plays in the background and the nerves begin to creep in, I look around at my (virtual) boys and wonder if I haven’t made a mistake in switching things around just become some analyst nerd with a laptop told me to. 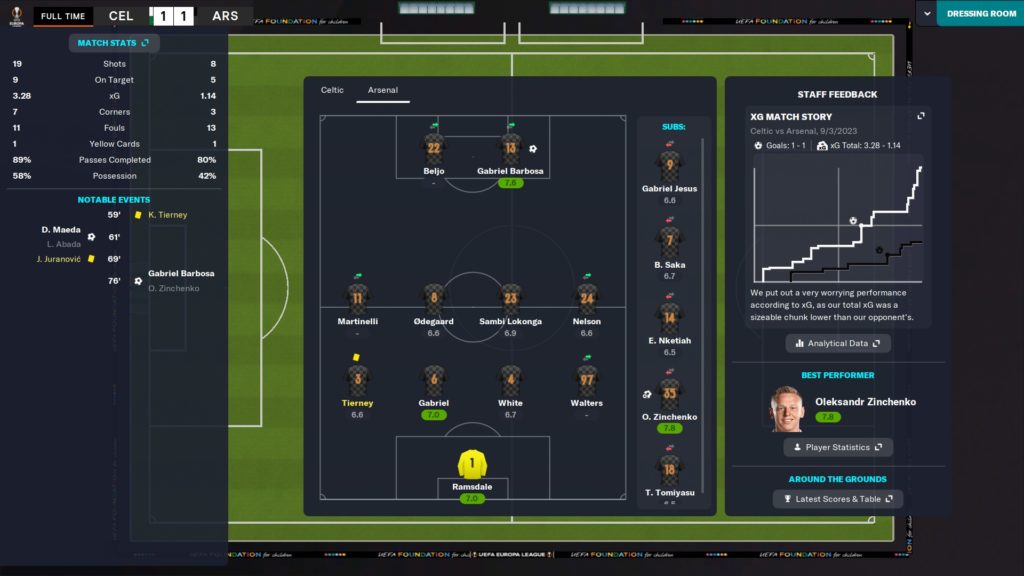 A stale 1-1 draw, which really should have been a dismal loss (just look at that xG!). Celtic dominated possession, which is to be expected, but we didn’t create much in terms of xG despite getting the majority of our shots on target.

Looking at the analysis page, all our shots were in the right sort of areas, in and around the penalty spot, but the shot map conceded makes for terrifying viewing. In terms of average positions it’s a pretty rigid 4-4-2, with the wingers tucking in tight to help protect the fullbacks. 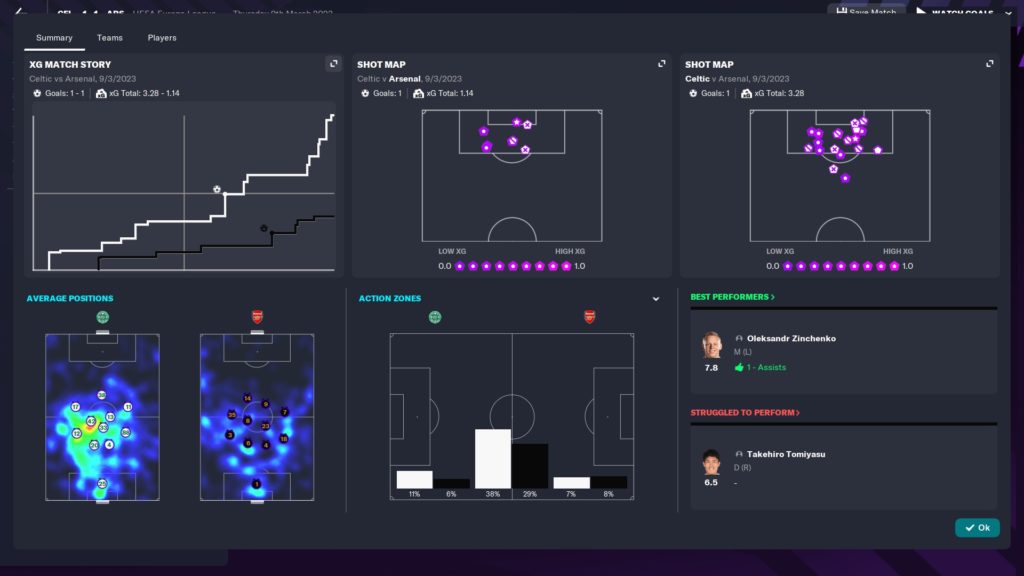 Hopefully we can chalk that one down to a minor blip and adjustment issues, and we’ll see how we fare next time out when we face Leeds at home. There is a part of me that is tempted to resort back to my gegenpressing, but think I’m going to stick with the little experiment to tighten things up at the back for a little while longer…

Just what I asked the lads for, kept it nice and tight until… the 27th minute. 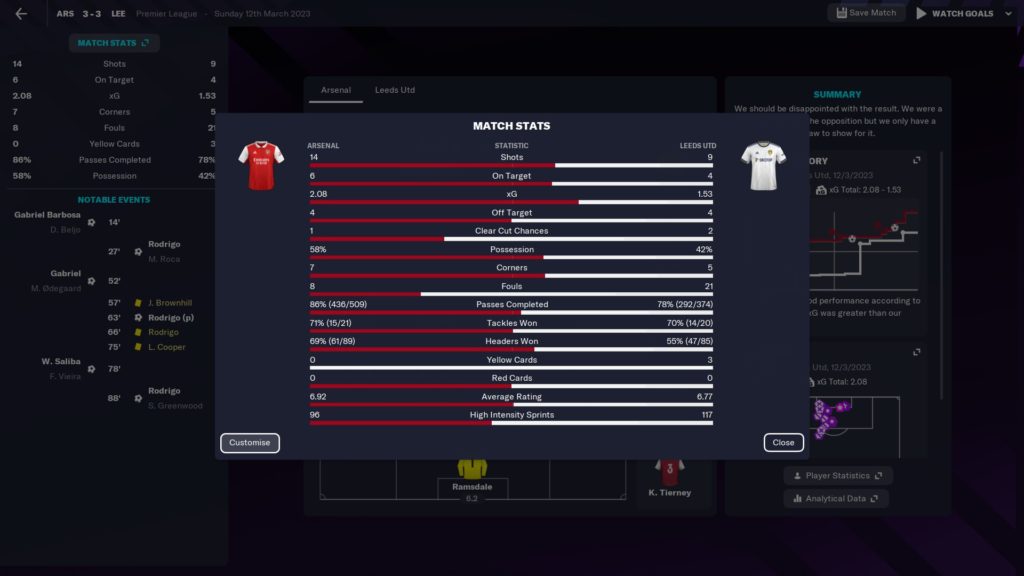 Looking at the Match Stats though, it was resembling a little more like what I was after. Still keeping hold of the ball well and dominating possession, we created more chances than last time out and it was individual mistakes at the back that cost us – barring those we looked like a solid unit. 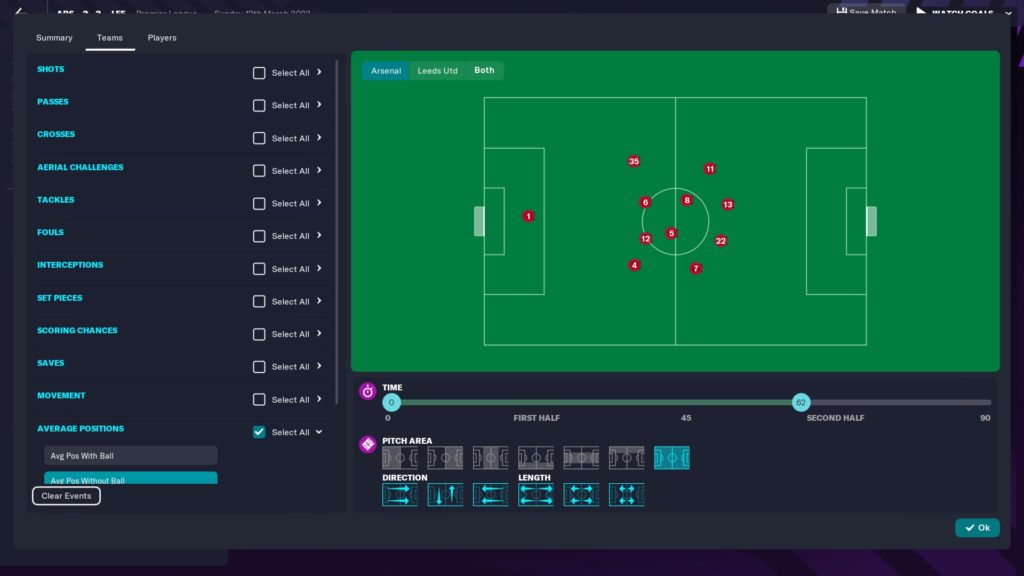 Our shape without the ball looked good as well, although still a little higher than I expected. The shape looks like a solid, compact 4-4-2, with the wingers tucking in again to support. You can see the difference compared to our shape with the ball, where the wingers pull out wider to create more space. This allows us to spread the play and utilise the pace of Saka and Martinelli. 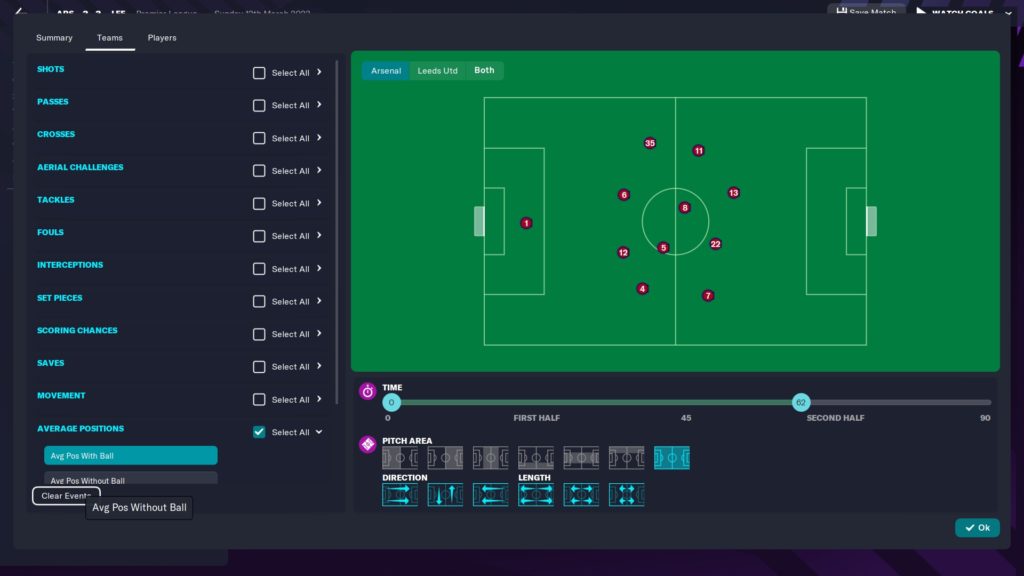 We also continued to get our shots away from good positions in and around the box. 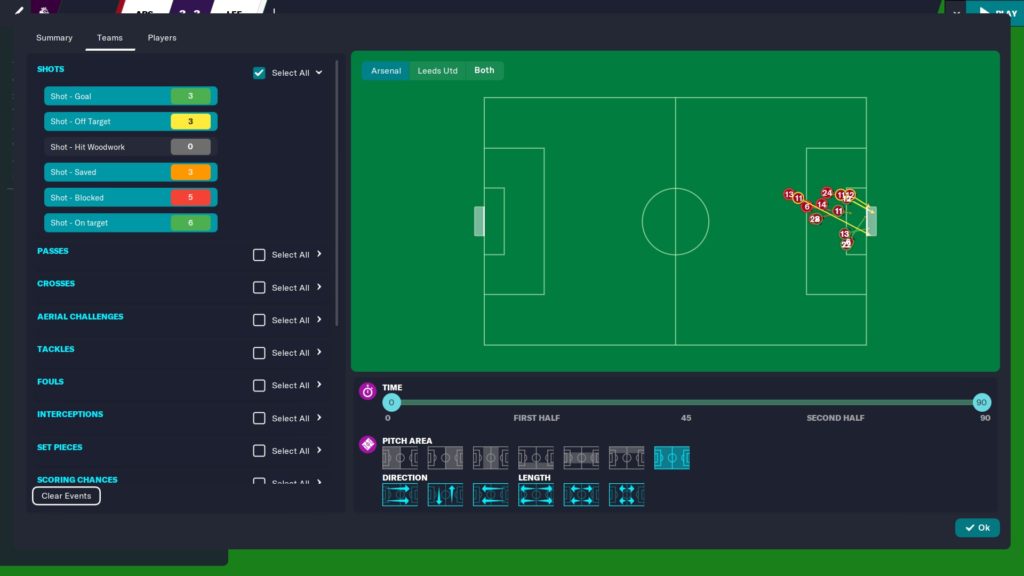 Whilst it was by no means an ideal result – conceding three goals at home to a side second from bottom rarely is – there were some positives to take from the game. Hopefully we’ll build on this and in next weeks update I’ll be able to dive a little deeper into how successful the tactic was throughout the rest of the season, hopefully with a touch of European glory!

“Aubameyang is what Man Utd are missing” – Merson

The story of Rami Shaaban and his misfortune