Arsenal FC 2023 – the Attacking Edition of ‘Should He Stay Or Should He Go?’

This will be my last article before I actually start my Arsenal save (on the Beta I’ve had very, very mixed results with Nottingham Forest). So, with that in mind, I’ll continue where I left off with my defensive version and talk you through the players that I think will be kept around and who will be auctioned off to the highest bidder.

First though, in case you are one of the very few people on the internet who didn’t read my last article (I assume, I haven’t actually seen the figures), I’ll do a little bit of copy and pasting from the introduction (I’ve got a word count to meet). If you did read the last one, feel free to skip on.

Looking at Arsenal’s outgoing transfers over the past couple of seasons, it looks as though they have been operating as a club with a long-term strategy for the first time since Arsene Wenger left back in 2018. Even though, on paper, they may have lost money by not recuperating much in terms of transfer fees for their older, more reputable players (the likes of Ozil, Lacazette, Aubameyang), just getting them off the wage bill will prove to be a blessing and give them more financial freedom looking towards the future.

Looking generally at the outgoings, they all seem to fall into one of two categories (yes, I know – if you’ve read my previous articles you’ll know that I love sorting things into categories), either ‘surplus to requirements’ or ‘old as fuck’.

Looking at the likes of Matteo Guendouzi, Lucas Torreira, Hector Bellerin and Joe Willock, it could be argued that they could all have a role to play in this Arsenal squad, even just in terms of rotation, Arteta has clearly decided that he has better options available to him and so to cash in.

Whilst this may not seem like a big deal, what it does tell us is that Arsenal haven’t lost any players that they haven’t chose to let leave. Gone are the days of the likes of Man City coming in to poach away their best players (or, perhaps more likely, they haven’t had any players of interest to bigger and better clubs), but regardless – the players remaining at the club are those that Arteta actually wants there.

And so, we begin. Whilst Arteta has done an excellent job of getting rid of the deadwood so far during his Arsenal career, there are still one or two that have slipped through the cracks, and I have the pleasure of telling them that they are being uprooted from their virtual houses and have to move their virtual wives and virtual kids to another virtual city to play for another virtual club. And I’m going to do it without feeling a shred of remorse.

Due to me still having no idea what player roles I’ll be using, or even formation to an extent (it’ll likely be some form of 4-3-3/4-2-3-1), I’m just going to lump all those who’ll be in the frame to play either defensive mid, centre mid or attacking mid all together in this section.

First impressions – not too shabby, but is in need of a bit of work. I’ll be looking at getting Partey, and his 160k a week, off the wage bill sooner rather than later, but there’s no doubt he could do a job if there are no suitors. Odegaard is going to be pivotal to my plans going forward, as is Smith Rowe – who I see shifting inside and playing through the middle.

This leaves us with Elneny, Sambi Lokonga, Xhaka and Vieira. 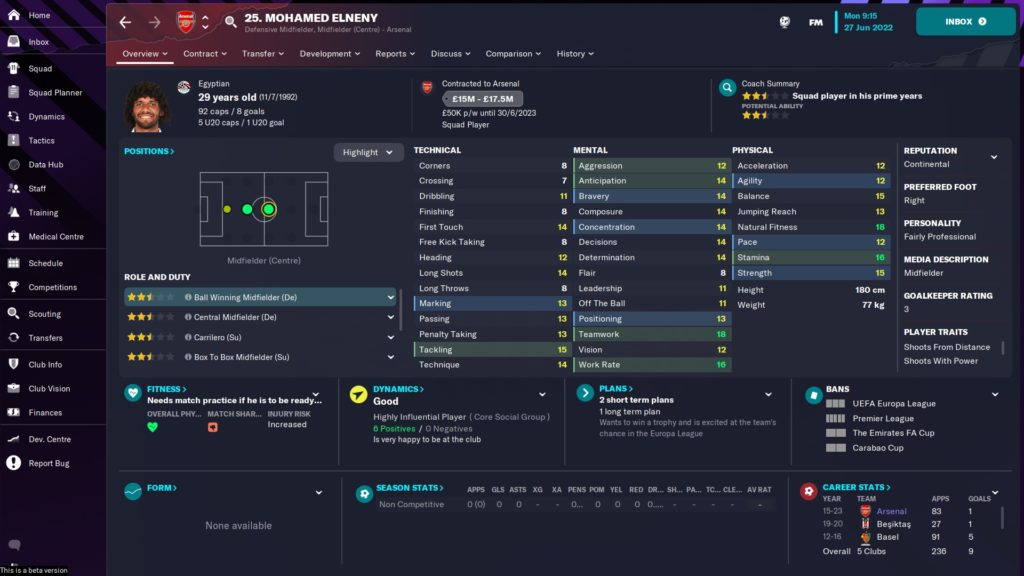 Time bloody flies doesn’t it. Mohamed Elneny, 29 years old already. Whilst he’s never been able to cement a consistent position in the starting eleven, he has been a very useful squad player for them over the years. Rated at 2.5 stars, this is all he will continue to be, but he is decent enough that you won’t feel a sense of dread and panic if you need to use him as your defensive midfielder. Good enough backup for now, with an excellent engine and high Teamwork and Work Rate. Given that Elneny wouldn’t command a giant fee if I was to get rid now anyway, I think he’ll stick around for the next season or two as backup unless A) somebody comes in with the right offer, or B) a better, younger player becomes available fairly cheap, who’d command similar wages. 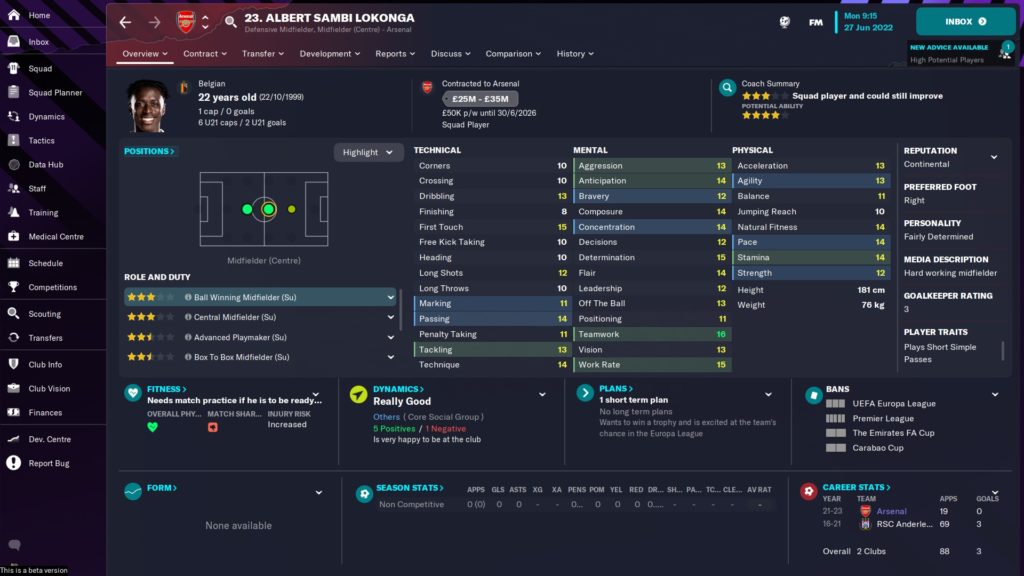 At 22 years old, Sambi is rated at 3-star Current Ability, which could potentially rise to 4-star. There is the basis of a decent player there, but I’d say currently he’s a slightly worse version of Elneny if you were to play him as a BWM. Another hard-working midfielder, Sambi is a little bit of an all-rounder, but slightly better on the ball than Elneny with his 14 Passing.

I’ll give him a season or two and see how he develops, and maybe if he was a couple of years younger I’d think differently, but if I’m honest I can’t really see him developing enough to become an integral part of the squad. 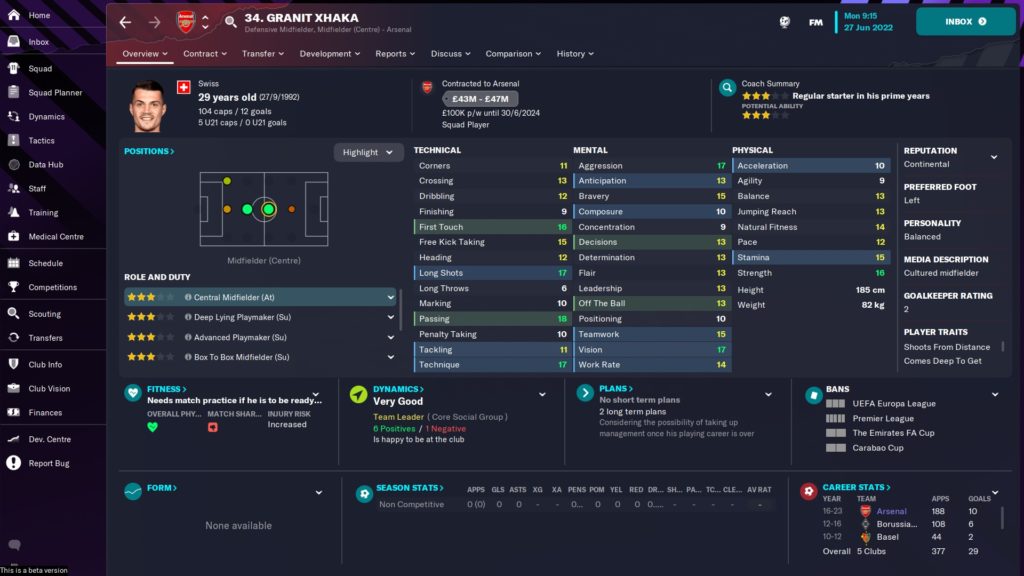 Granit Xhaka, in real life, seems to have finally developed into the player Arsenal fans thought they were getting when they first signed him 6 years ago. A lot of this is to do with him being granted a bit more freedom, finally playing with a solid midfield partner alongside him rather than being sat alone in front of the defence throwing two footed lunges towards anyone who came within a ten-yard radius.

This has been reflected in game, with his poor Tackling (11) and Positioning (10) meaning that he’ll never be the most suitable man to act as a lone defensive midfielder, breaking up play, but he could do a job there as a Deep Lying Playmaker due to his excellent range of Passing (18) and Vision (17).

At 29 years of age, a decision needs to be made about Xhaka, as the next year or so is the last opportunity to get a decent amount of money for him. Personally, because I’m such a romantic, I think I’ll allow him to continue his redemption arc and give him another couple of years – but if a big money offer comes in then I may be forced to accept it and bring in somebody younger with a similar skillset. 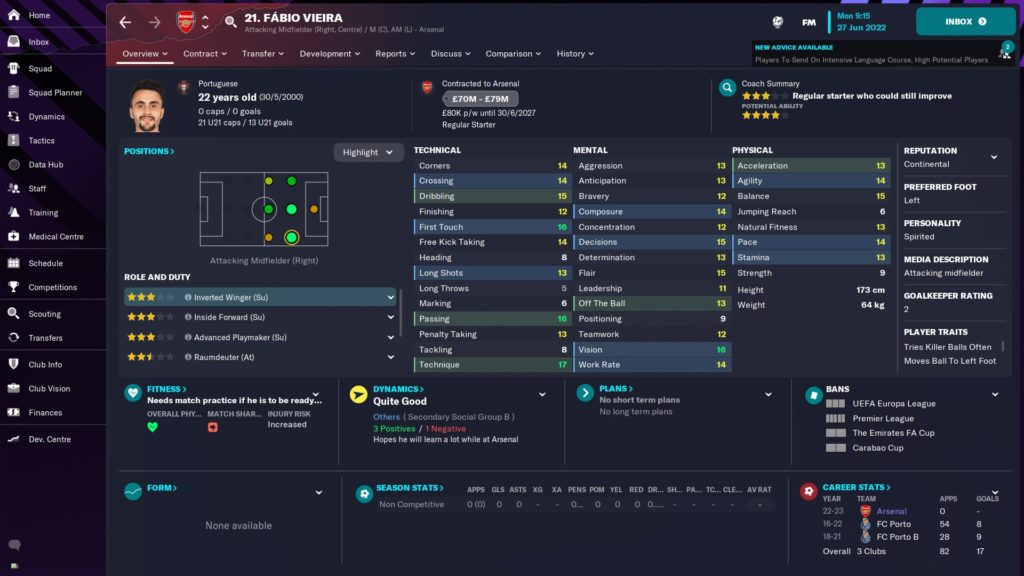 A new £35million signing at the Emirates, Vieira has had a minor role so far this season, playing just 168 minutes across 7 league games (from a possible 13). Still only 22, he’s very much a signing for the future, but he will still be disappointed by the limited impact he’s been able to make thus far.

In game, Vieira looks very much a like-for-like replacement for Granit Xhaka should you wish to retrain him into a more deep lying role rather than his current AM/RW position. Both elegant passers of the ball and poor in the tackle, Vieira could definitely save you a few quid when it comes to replacing Xhaka further down the line.

One aspect of Vieira’s game that is better than Xhaka is his Crossing (14) and Dribbling (15), which does lend itself to perhaps playing out wide as an Advanced Playmaker or Inverted Winger, but for me he isn’t quick enough to play there consistently as first choice, despite him being able to do a decent job (this is just down to my personal preference – I’m sure he could be great there!)

I’d certainly recommend keeping him around for a while whilst you find the best role for him, but that estimated figure of about £70million is not to be sniffed at if teams start coming in for him!

Removing Emile Smith-Rowe and Fabio Vieira from the equation, both of whom I see their future lying playing a more central role, and suddenly we’re looking a little light up top. Despite this, we do have some quality options, with a front three spearheaded by Gabriel Jesus with Saka and Martinelli either side a formidable threat to opposition defenders, and a forward trio than I plan to keep intact for the next couple of years. There will be times when I utilise the likes of Smith-Rowe and Vieira (as well as potentially Zinchenko, and the likes of Marquinhos coming through the ranks) on the flanks, but other than those the only out and out winger is Reiss Nelson, and the only backup striker is Eddie Nketiah. 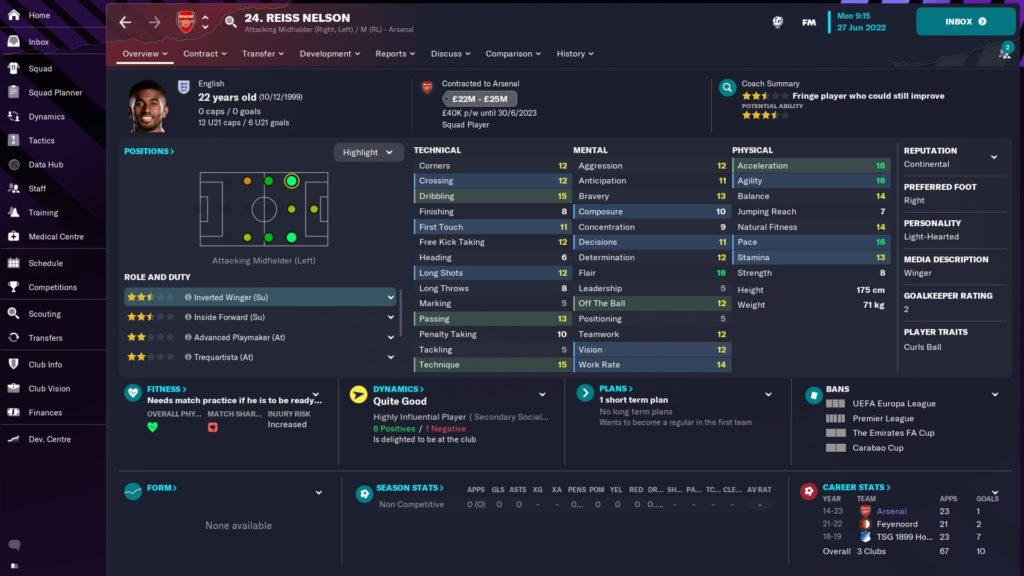 Home Grown, which is always a bonus, Nelson is fresh from a year out on loan at Feyenoord and is quite likely in last chance saloon. At 22 years old, it really is now or never for young Reiss, having so far failed to live up to his undoubted potential.

Rated at 2-and-a-half-star current ability, Nelson has been rated as still having room to improve by a full star.

Pros: Fast. Pace (16), Agility (16) and Acceleration (16) all mean that once he’s on his bike, few defenders are catching him, and if they do, his good Dribbling (15) mean that he might be able to wriggle away. That pretty much concludes the pros.

Nelson will be good enough to do a job as back up for a year or two, but honestly the only reason I’d keep him around any longer is that he’s Home Grown. 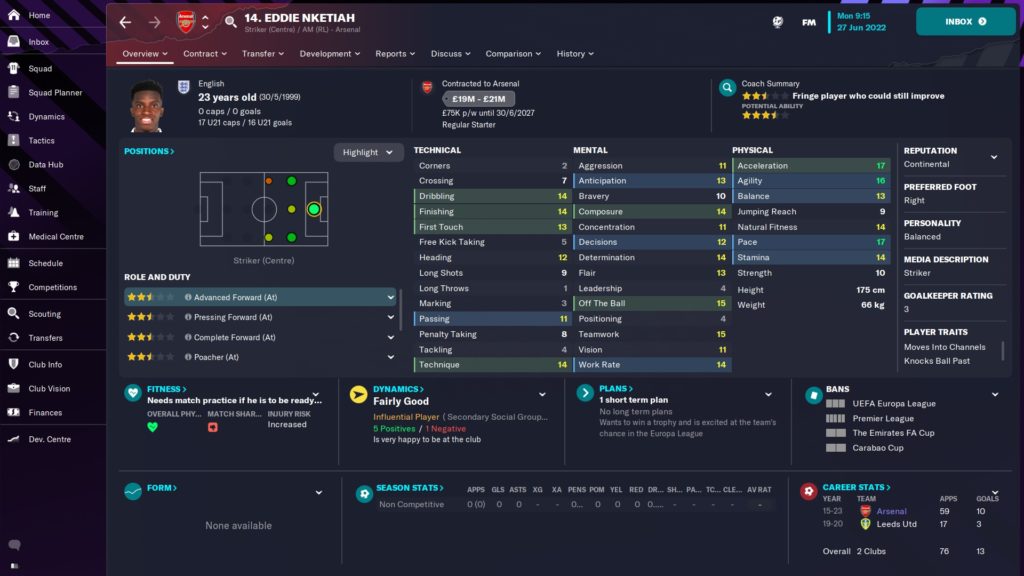 Eddie Nketiah is fast. Not just normal people fast. Road runner fast. Once he sets off, there aren’t going to be many centre halves that can handle his pace in behind. Pace (17), Accelertion (17) and Agility (16) mean that we’ve got a real nuisance on our hands here, whilst his Finishing (14), Composure (14) and Off The Ball (15) attributes all point to a very solid option up top for an Advanced Forward off the bench against tired legs.

The only issue I can see is that he’s not quite well rounded enough to play the Complete Forward role that I was intending on having Gabriel Jesus in, so a like for like swap won’t quite work, with his Passing (11), Decisions (12) and Vision (11) being a little on the low side, meaning that he isn’t quite suited for link up play. Another good option could be if I revert to a 4-4-2, having him partnering Jesus up top.

Whilst he isn’t perfect, the fact that Nketiah is Home Grown and a very decent option (who can still improve according to the scouts), means that if he performs as well as his attributes indicate he should, then I can see him sticking around for the next couple of years.

Football Manager 2023 Arsenal FC Defensive Edition: Should He Stay Or Should He Go?

Arsenal should not rush in to signing the Italian winger