So here we are, judgement day.

When I left off, we’d just begun to implement a couple of tactical changes, reverting back to a Mike Bassett style four-four-fucking-two, playing with a low block. Despite my initial scepticism, I continued with different variations of the low block for the remainder of the season.

A comprehensive, but expected, 5-2 victory over Celtic was the result of my last game of March, seeing us into the Quarter Finals of the Europa League.

April was a busy one. Eight games, six of them in the Premier League, whilst the other two saw us knocked out of the Europa by a Man United side that we should really have beaten.

As you can see, overall, we became more difficult to score against (despite conceding four against Newcastle), and started to pick up a couple more points than we had been. As you can see from the analytics of that Newcastle game, we struggled to create anything, resorting to pot shots from range, whilst Newcastle could have scored a dozen if they’d have had their shooting boots on. 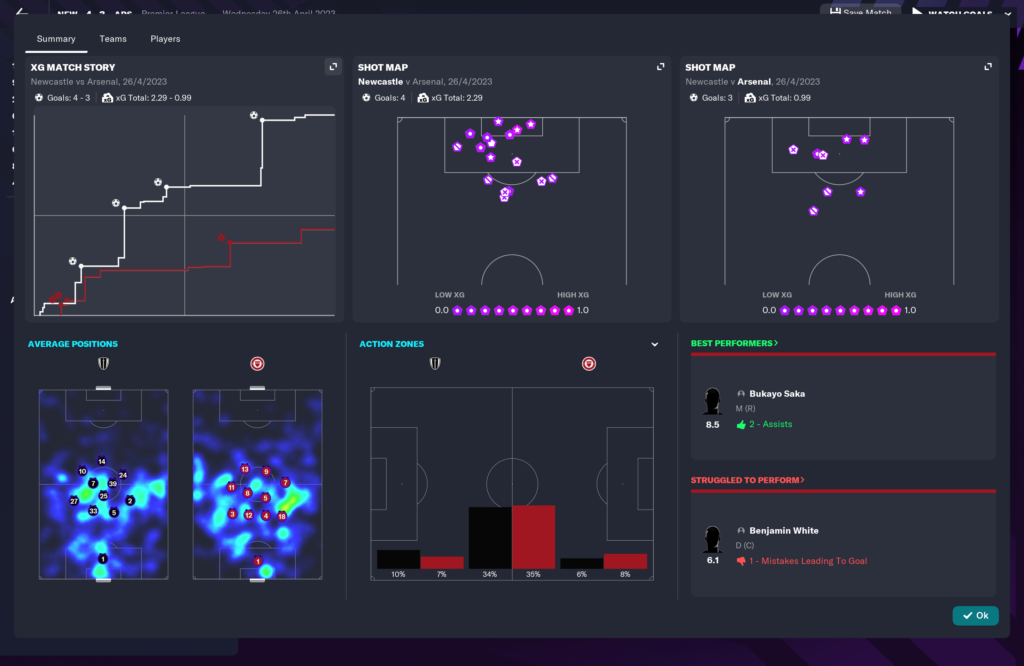 However, if you compare the Newcastle game to the 1-0 win over Man United in May, you’ll see a world of difference. Limiting them to just six shots (one blocked, four off target and just one on target), we defended masterfully, and created a whole host of opportunities for ourselves. Moving forwards, I would like to try and eradicate the lower xG shots from outside the box, but at the moment I’m content with dominant performances, even if we aren’t quite taking as many chances as we should be. 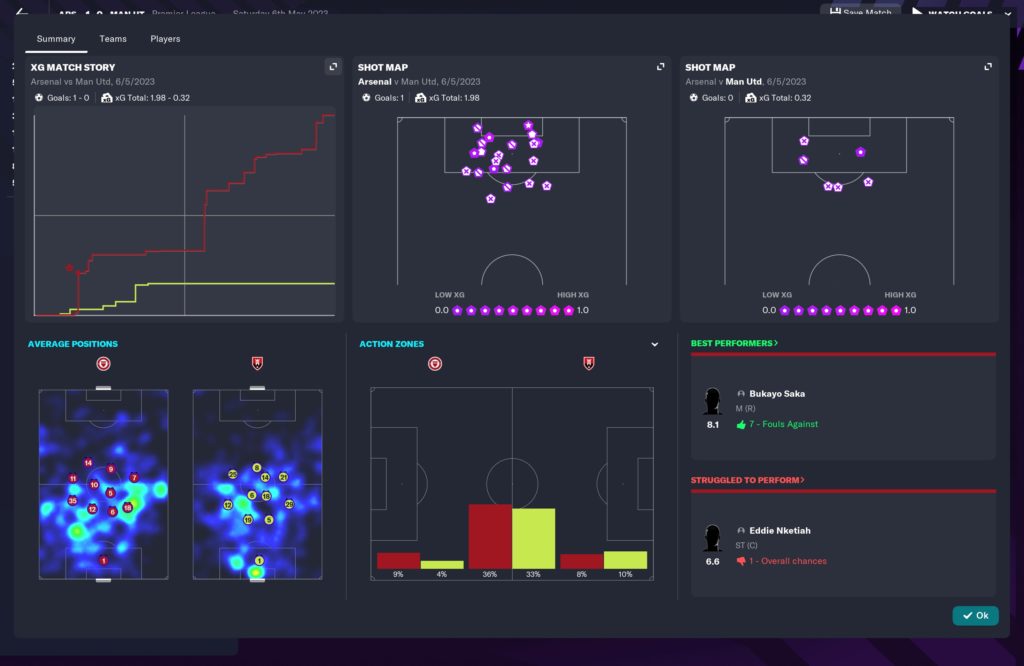 Barring the Fulham result, which was a complete anomaly in comparison to the rest of our recent form, it was a very solid month for us. Whilst I obviously would have expected us to beat Forest, to do so comprehensively without conceding was a major positive, especially with the clean sheet against Man United chucked into the mix.

So, here we are, heading into our final game of the season, and this is how the table looks. Whilst I am slightly beginning to regret the Billy Big Bollocks act at the start of the season, promising Champions League football to the powers that be (as well as a number of players throughout the campaign), we are still in the running. 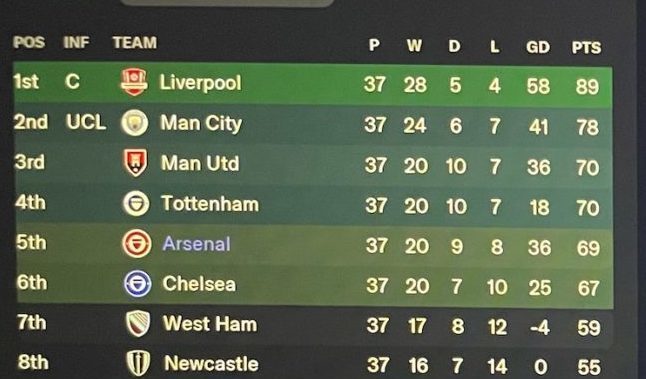 The fixtures that concern us are as follows:

So, given that Liverpool have been absolutely rampant this season, it means that everything is still to play for on the final day. 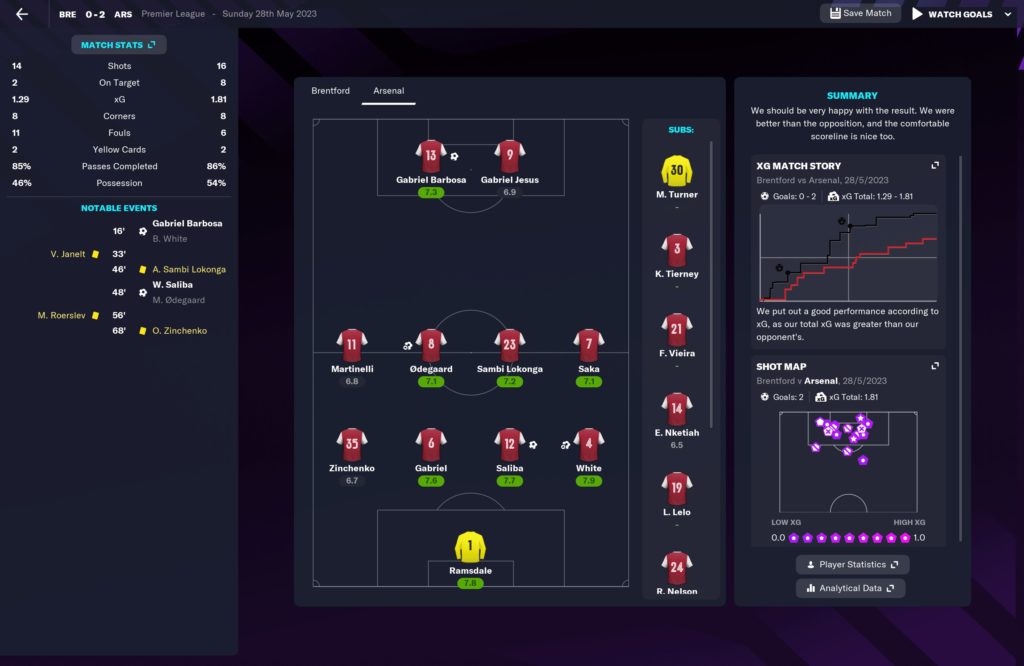 So there you have it, we upheld our end of the bargain. Not an unbelievable performance by any stretch of the imagination, but 3 points on the board is all that matters. Ben White finally had a good game, Sambi Lokongo looked assured in the middle of the park and Gabriel Barbosa got himself amongst the goals. 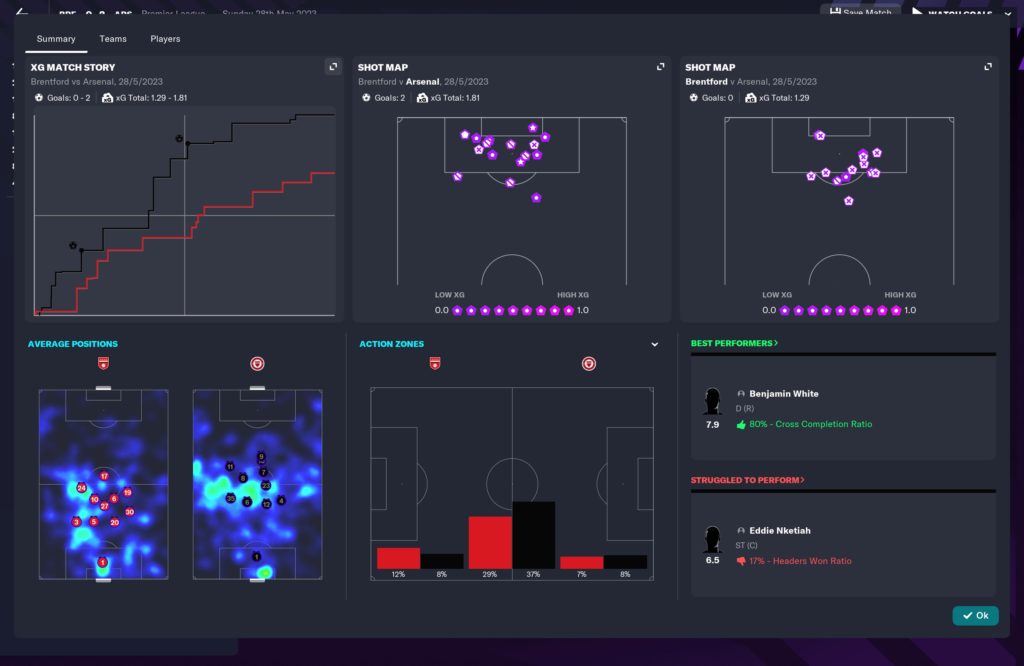 I was a little surprised at our average positions during the clash, as usually we maintain a pretty rigid 4-4-2 throughout, but Saka drifting inside, occupying the space in front of Lokongo and almost playing as an attacking midfielder caused them all kinds of problems.

So, with us taking all three points the final league table looked like this: 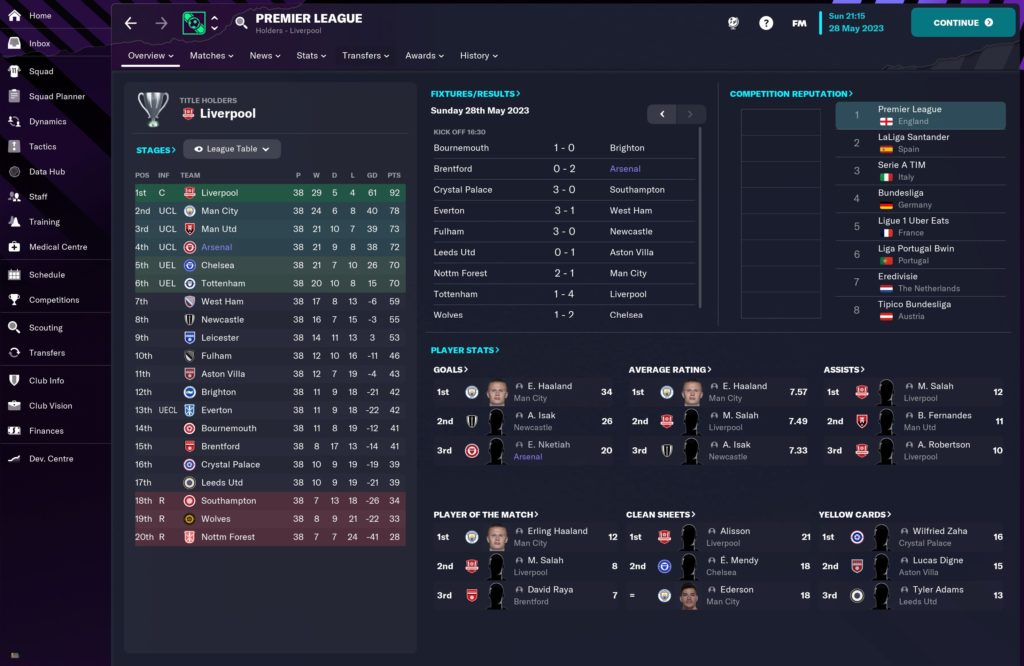 Spurs were thrashed 4-1 by a Liverpool side that are a complete contrast to their real life selves at the minute, allowing us to overtake them and secure Champions League footy, an ending to the season that will have surely have made the result all that sweeter for Arsenal fans.

So, overall, I’m content with the season. Whilst it did look as though we’d challenge for the title at one point in the season, my aim was Champions League football and that’s what we got. 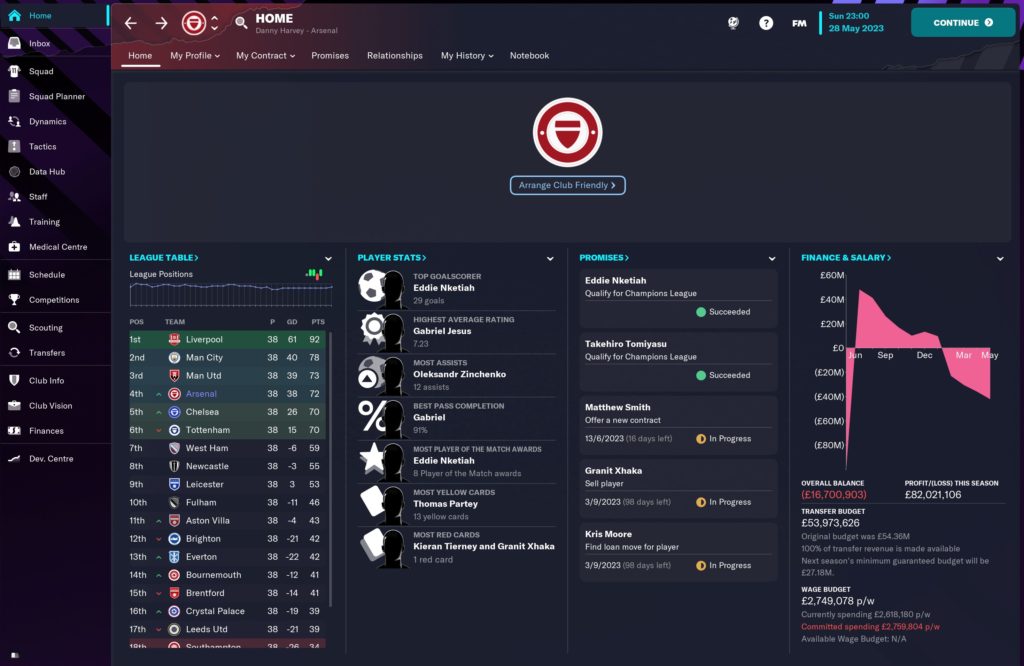 So Eddie Nketiah finished the season as top goal scorer, which is testament to his early season exploits seeing as he only scored 6 of his 29 goals after the end of January. His form suffered slightly, and with Gabriel Barbosa waiting in the wings, he began to find himself in rotation with the Brazilian, who I had originally planned to alternate more with Saka.

Zinchenko did well to pick up the most assists, as he played literally all over the park for me with very little consistency, just filling in wherever needed. Playing left back, left mid, both centre mid roles and wide right at times throughout the season, he was the epitome of a jack-of-all-trades.

Looking forward to next season, my main aim is to integrate the young signings I’ve made, such as Gloukh, Neves and Mosquera into the first team squad, as well as giving the likes of Walters, Patino and Brooke Norton-Cuffy the opportunity to impress.

I’ll also be looking to ensure we aren’t scrambling for Champions League on the last day again next season, with the squad more than capable of sustaining a proper title challenge this time around, especially with a quality addition or two.

Under the microscope: How Zinchenko’s versatility will add another midfield option...