And away we go.

Finally, the official Football Manager ’23 is released, and with it my first proper save. Whilst Mikel Arteta is doing a sterling job of his own, it’s now up to yours truly to take over and either put the finishing touches to his hard work and take all the credit, or completely undo everything he’s spent the last few years creating. 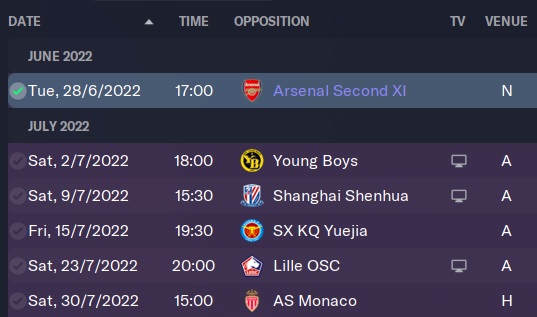 And, to kick us off, we’ve got a little bit of a mixed pre-season ahead of us. Or, rather, behind us – which is why it’s only half a screenshot (I forgot to take one before I’d played the games, so this will have to do).

The classic run out against the reserves to start us off, before a run of away games that begins at the Wankdorf against Young Boys. As difficult as it is, I’ll resist the urge to make a joke because it’s incredibly cliché now. I’m better than that.

We’ll then pop over to China for a couple of easier (on paper) games, before the two most difficult games of our pre-season against Lille and Monaco. Overall, all teams we’d expect to beat, but the French teams might cause us some issues. Wins would be nice, but at the end of the day the real quiz is settling into our tactic and getting match fit. 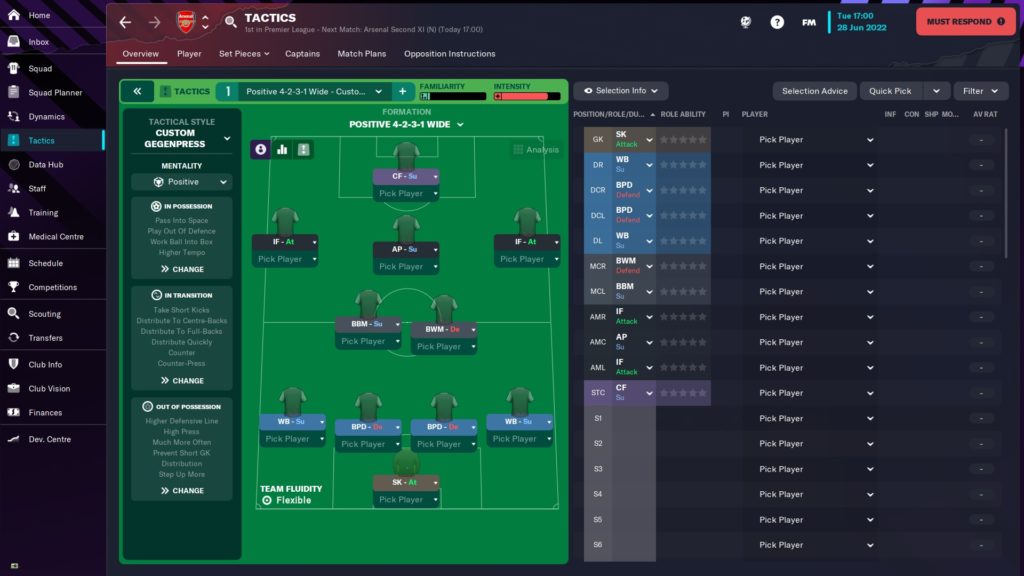 This was what we started off with, a pretty bog standard 4-2-3-1 Gegenpress, looking to press the opposition high when we don’t have the ball and countering quickly when we manage to win it back. 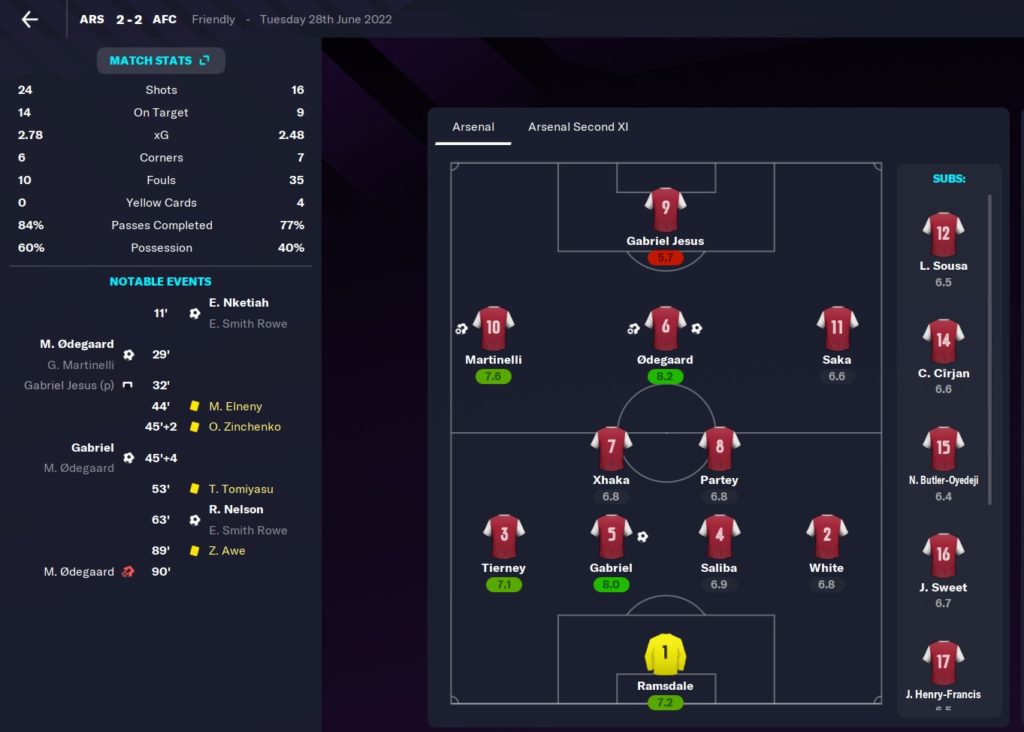 First up, we played against the Arsenal Second XI. Although, anybody in the first team squad who didn’t start for me got a game for them, as you can see by the quality of my bench, and the players involved in the notable events. It’s clear a few of the lads were less than pleased with my team selection, deciding to volley fuck out of their teammates in a dastardly bid to injure them and secure a place for the next game. A game that means very little, but it was nice to see that our new star £50million striker couldn’t hit a cows arse with a banjo in a meaningless game against his mates. Seeing as I’ve disabled transfers for the first transfer window, and have just him and Nketiah as my forward options, I suddenly thought that maybe I had more of a challenge on my hands than I anticipated. 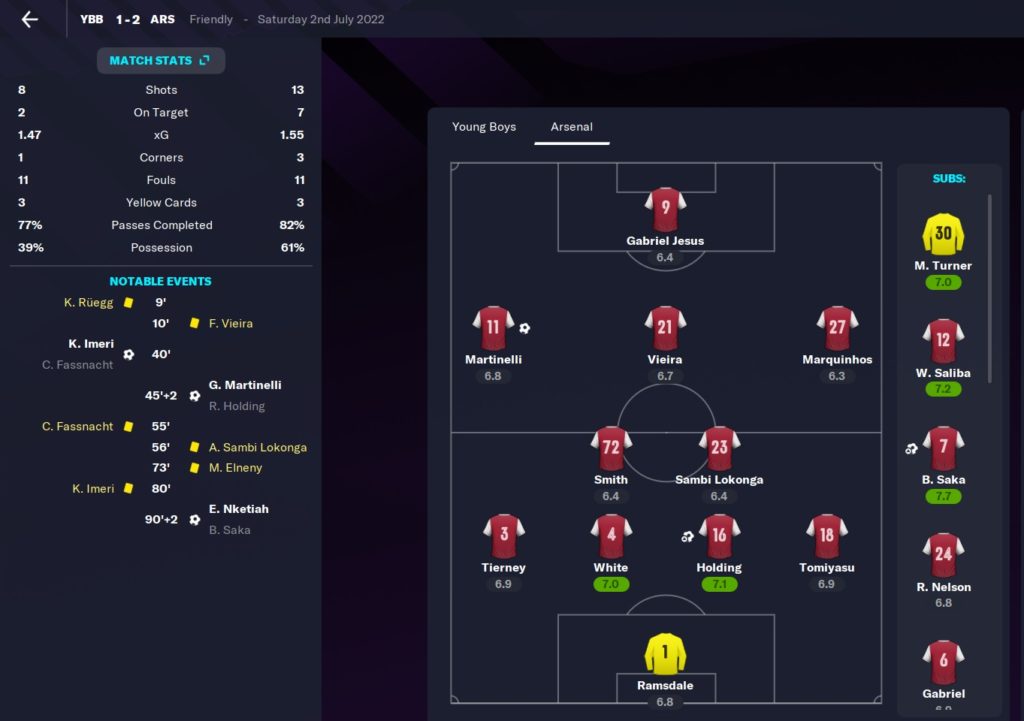 So, that’s 0 in 2 for Mr Jesus. Not the most exciting of games, with our defence getting the best of the average ratings despite allowing them a pretty similar xG. Whilst far from my first choice midfield, I’d still expect us to dominate against a side like Young Boys, which we didn’t really do so. Martinelli and Nketiah scoring were positives, but otherwise it was a pretty lacklustre performance. 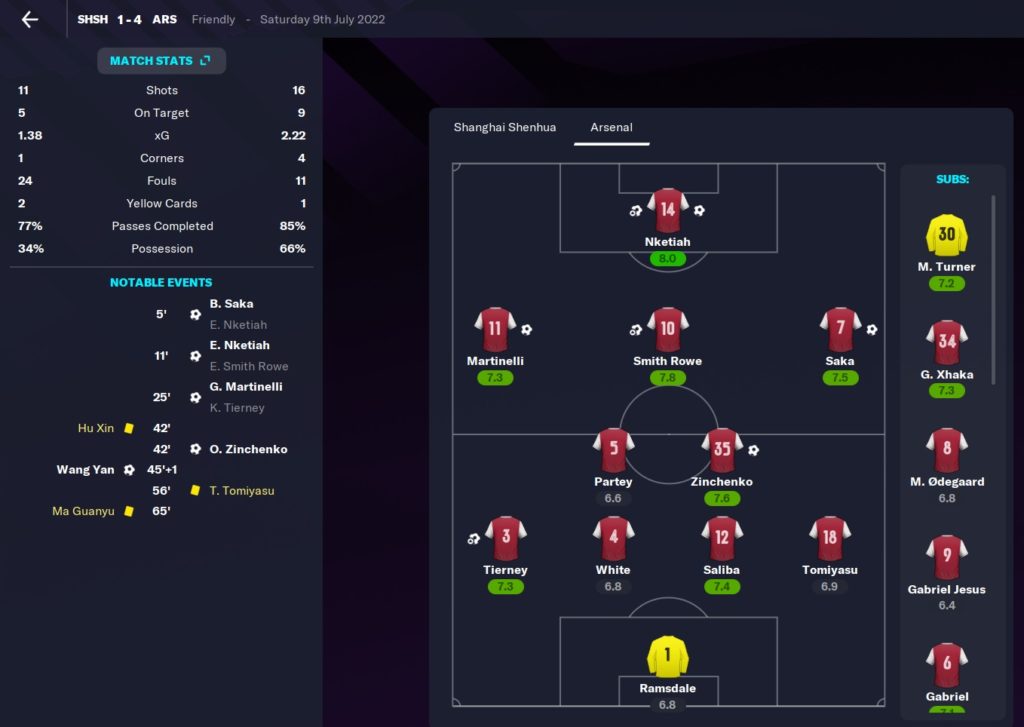 Finally we began to click a little more, creating a 2.22 xG as Nketiah stole the show with a goal and an assist. We dominated possession and managed to have 9 shots on target. Again, we rotated massively, switching the whole eleven at half time which took the sting out of the game and killed our momentum. Again, Gabriel Jesus was poor, so I decided to switch things up a little next time out. 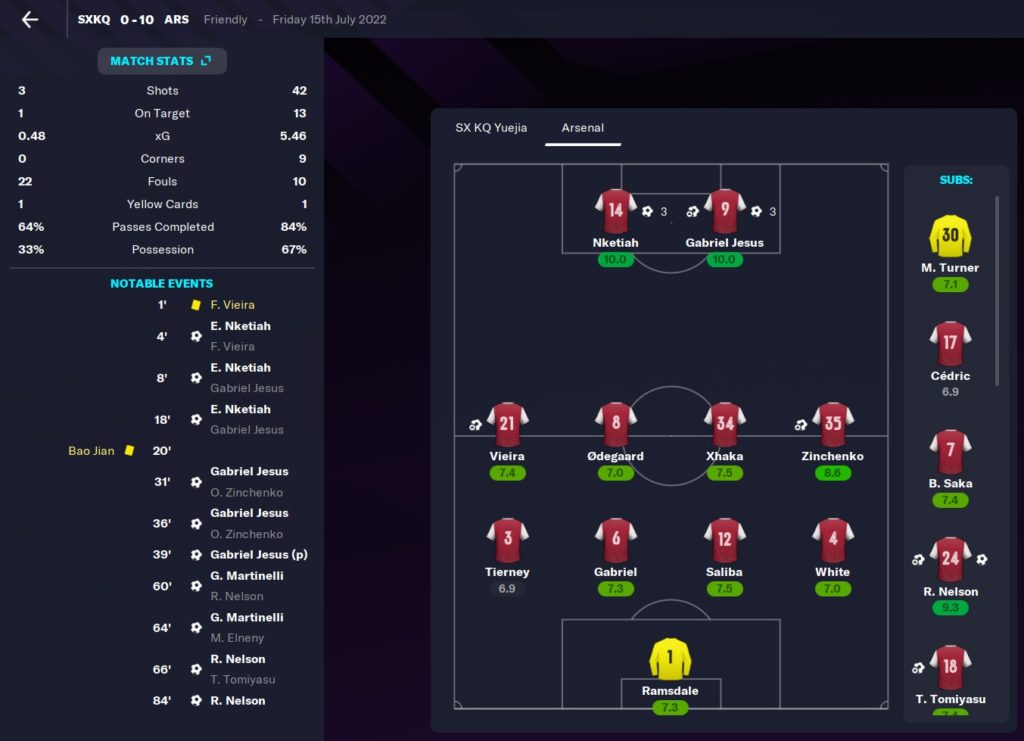 All he needed was a little friend up there with him. I’ll level with you. I had never heard of Shaoxing Keqiao Yuejia. Going into the game I had no idea what division they played in, no idea who any of their players were or no idea how easy it was going to be. Turns out, according to their Club Overview page (the limit of research I’m willing to put into this), that they are a Chinese non-league club, founded in 2021, with a £30 season ticket (of which they’ve sold 228). And, remarkably, they play in a 40,000-seater stadium.

But, I only found this out after the game, so spent about 15 minutes thinking I was a tactical genius, ready to revolutionise the game as my idol, Mike Bassett, did with his infamous 4-4-fucking-2. Turns out, they were just an extremely poor side in an extremely empty stadium. But at least Gabriel Jesus was off the mark, with him and Nketiah both slotting first half hattricks. So, with my dream of a two man strike partnership fully intact, off we headed to France to face Lille. 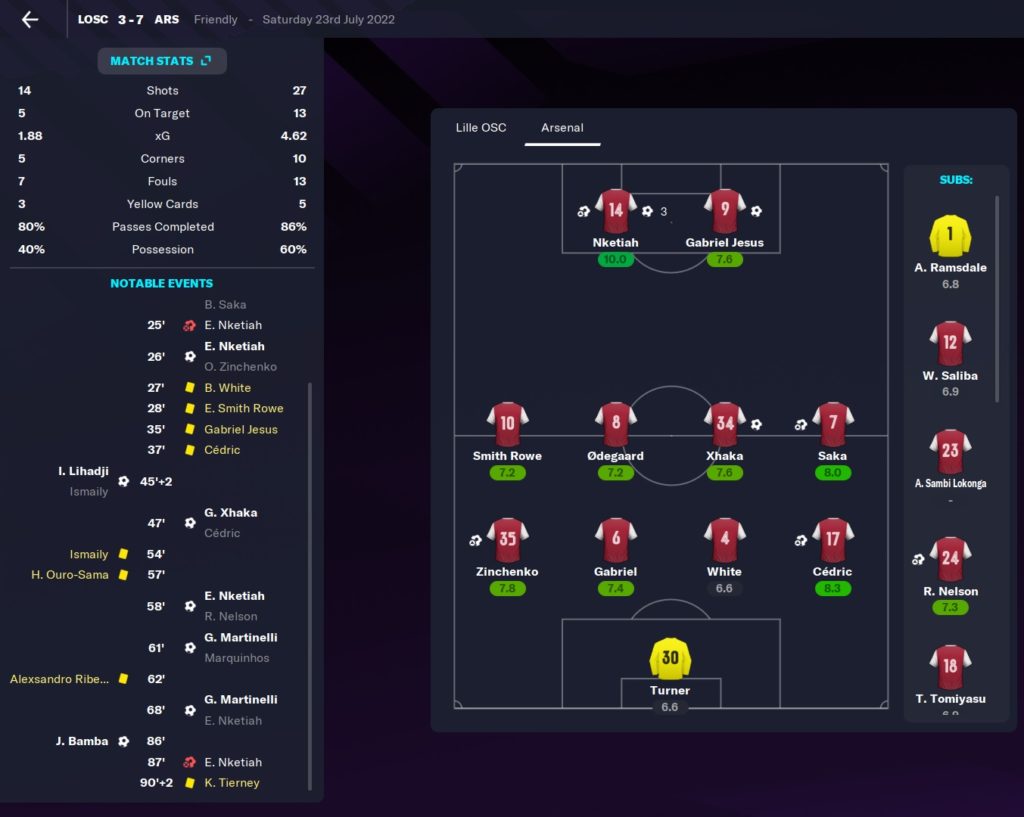 Again, we lined up with a flat 4-4-2, with Jesus acting as a Complete Forward next to Nketiah as an Advanced Forward. We had Smith Rowe and Saka cutting inside, with Xhaka acting as the more defensive of the two central midfielders with Odegaard pushing on. And boy oh boy did we create some chances.

7 goals, an xG of 4.62 and 4 clear cut chances created saw us dominate offensively, but we conceded more chances than I would have liked, with our two-man midfield failing to offer as much protection as I would have hoped. Nketiah managed to grab himself a hattrick, an assist, and had two other goals disallowed for tight offsides. Not bad for a days work. 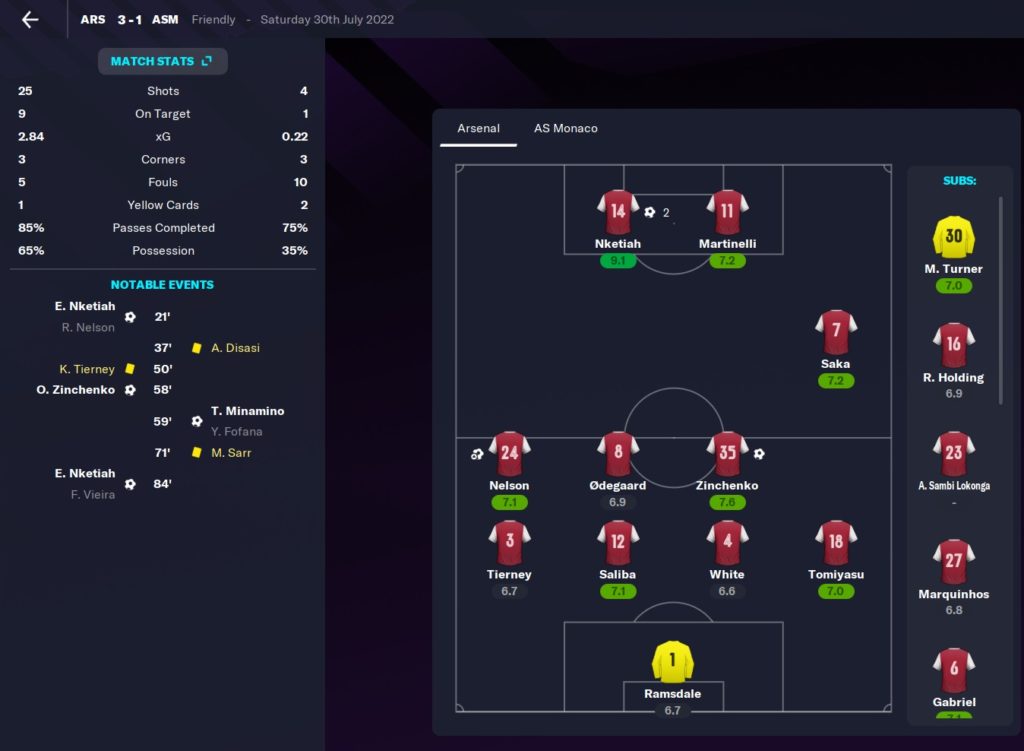 We were much better defensively against Monaco, allowing an xG of just 0.22 against us, whilst creating an xG of 2.84. We took too many shots from distance, despite my instructions not to, but as a whole it was an excellent performance. We dominated possession as well, and even making quite a few subs didn’t really disrupt our rhythm. 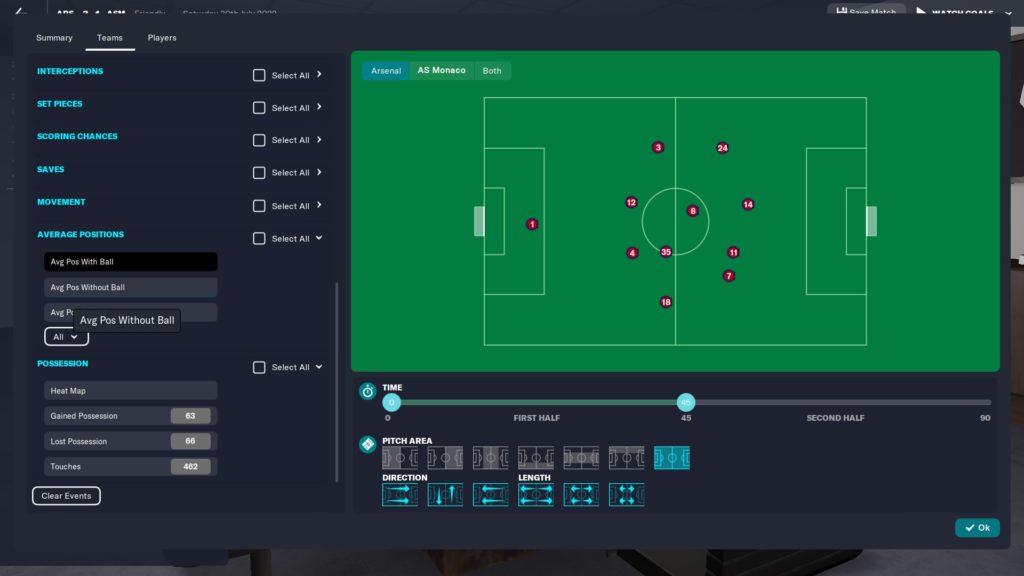 Looking at our average position with the ball, it showed a 4-2-4, with Zinchenko occupying a holding role in the middle of the park whilst Odegaard pushed on a little in a more creative role. A pretty solid shape, with Saka and Nelson starting out wide before drifting inside. 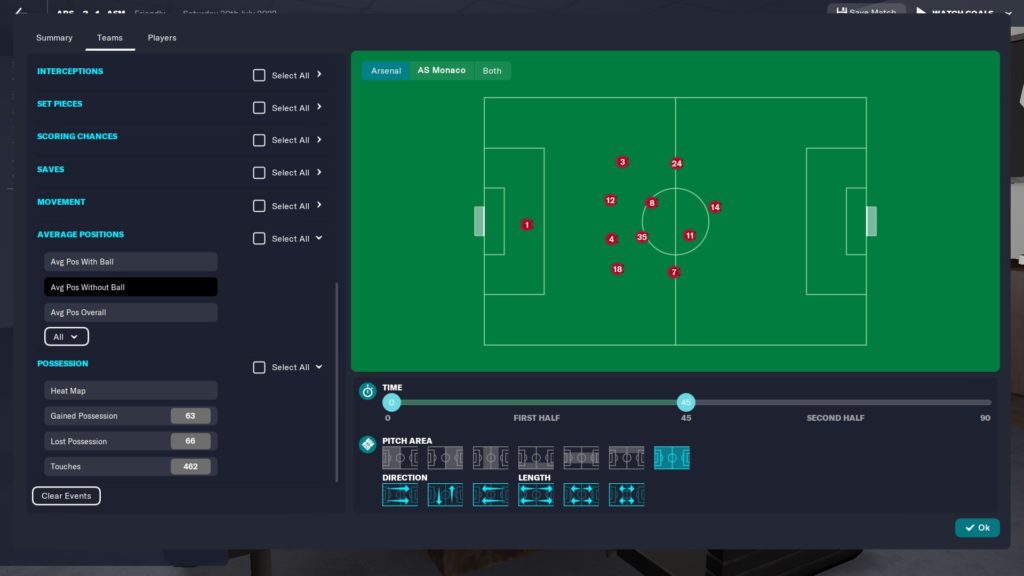 In terms of our average position without the ball, it shows a tight, compact 4-2-3-1(ish) formation, with Martinelli (playing in the Complete Forward role) dropping into a deeper position, almost acting as an attacking midfielder. Our wingers tuck in, making us hard to break down, and ready to trigger the press. 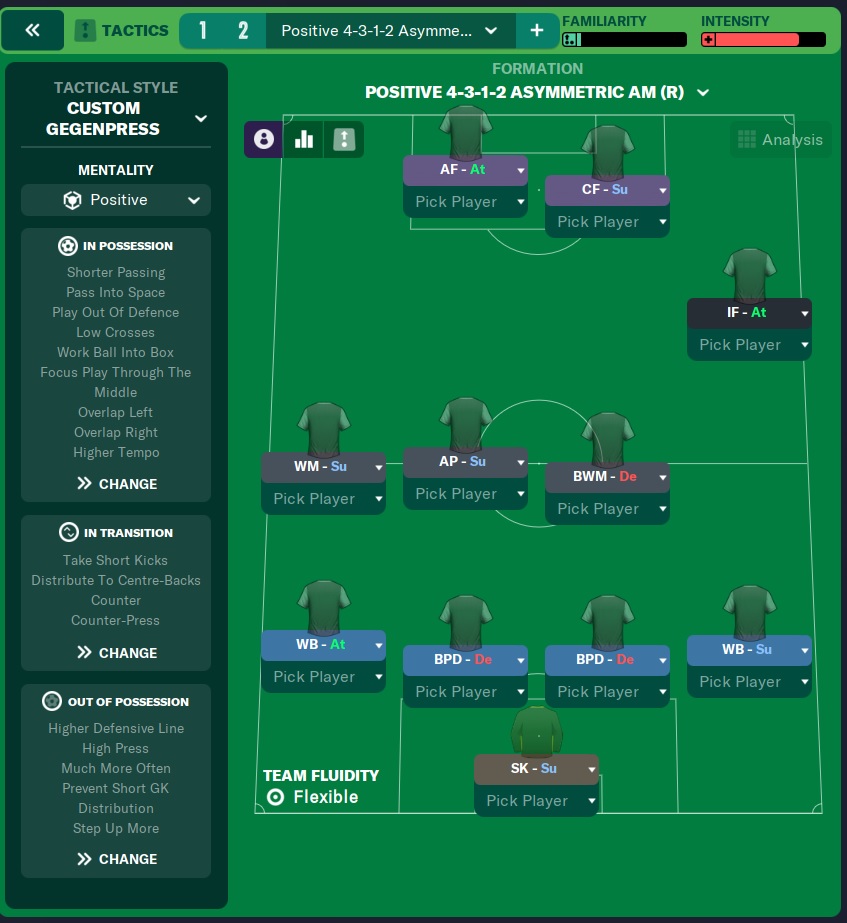 And this is the shape that we’ve ended up with heading into our first game of the season against Crystal Palace, where we’ll discover whether our very solid pre-season form was sheer fluke or tactical genius. I’ll be honest, I like the way it looks at the minute and it’s got us playing some attractive stuff. One of my key concerns is the lack of protection in the middle, and I might change the more advanced centre midfielder into a BBM or a CM(s) moving forwards – particularly in the bigger games.

The lack of options up top is another slight worry, with Martinelli the only option up there outside of Nketiah and Jesus, but I’d rather use him on the left wing. But, with transfers disabled, this will have to do us until January at least!

Football Manager 2023: Should He Stay Or Should He Go – Attacking Edition

Football Manager 2023 Arsenal FC Defensive Edition: Should He Stay Or Should He Go?

Daniel James looked up to Thierry Henry growing up