Right so, you join me now on March 6th 2023, about three quarters of the way through my first season as Arsenal gaffer. There have been some highs, there have been some lows. I was meant to do a mid-season review, at the end of the World Cup and before the January transfer window to show some of my targets – but after spending that long continuing I was just desperate to see Eddie Nketiah’s name back on the scoresheet. My sweet, sweet prince. 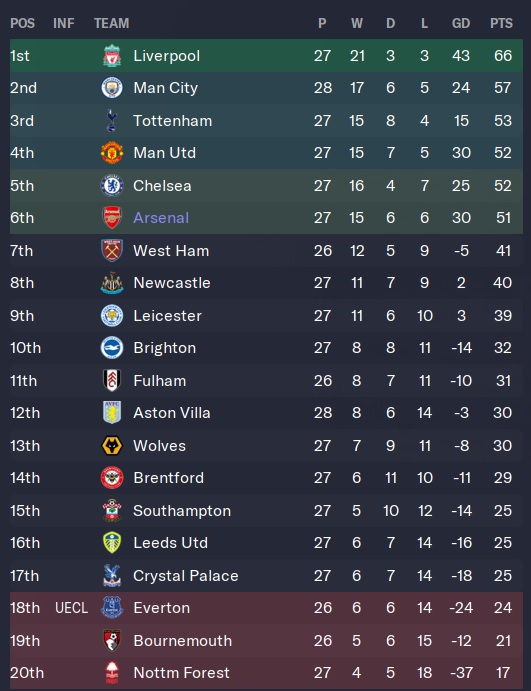 So, at a glance: We are currently going through The Lows.

We were the closest side to a rampant Liverpool for the best part of the season, but a complete and utter collapse in form has seen us drop down to sixth as the chasing pack have caught up and overtaken us.

While other managers might look at this and see the negatives, I like to think of myself as a ‘Glass Half Full’ kinda guy. So, the positives… 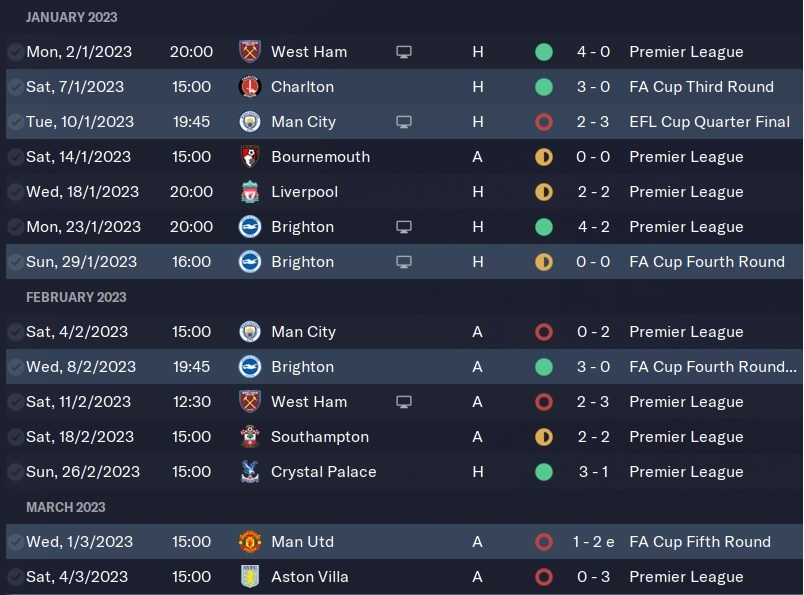 FA Cup run: We went out after extra time to Man United after fielding a half-rotated side. It’s one of those, it happens. I’m not too mad about it.

This is where my real concern lies. We were sitting in 2nd place at the start of Jan, playing some lovely football, not a care in the world. Things continued nicely against West Ham, smashed them 4-0. All was right in the world.

2 wins, 3 draws and 3 losses later, all bar Liverpool and Man City against sides that we’d expect to beat, just isn’t good enough, and in my next article I’m going to go through the match stats to investigate just what is going wrong.

First though, I’m going to introduce you to a couple of our new faces…

As I’ve said previously, I’m going to be looking to follow a similar transfer philosophy as Arteta has been, namely targeting players from one of the following three categories:

Category A – Low-money gambles that you’re pretty much guaranteed to make a profit on. Unlikely to come in and start straight away, they’re usually either young and need some more first-team experience out on loan or will come in as a rotation option and have to earn their place.

Category B – Players that have been playing well at a lower level and have earnt their move and their chance to prove their worth at a higher level. These players will usually have been signed with the intention of making an immediate impact in the first team, and due to the selling clubs’ reluctance to let him go (as one of their best players) commands a considerable fee.

Category C – Players that are playing for clubs at a higher level than Arsenal but struggling to properly establish themselves in their star-studded lineup. Still young enough to improve, they may command a big fee, but their quality is usually more assured and they’re less of a gamble than those in Category B. In Arsenal’s case, we’ll be looking at players who play for clubs who would expect to get to the latter round of the Champions League, the likes of Real Madrid, Barcelona, Juventus etc. 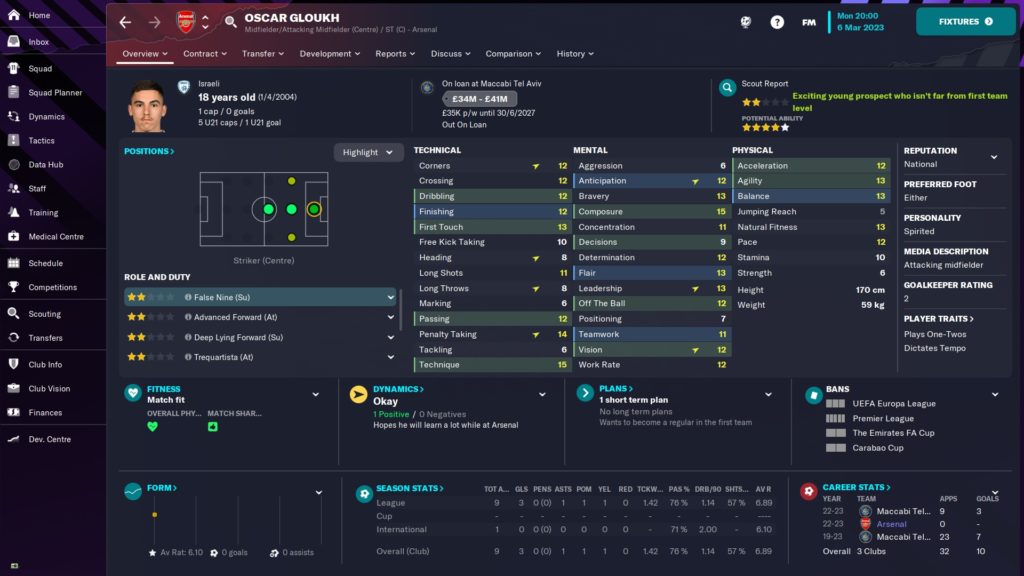 The first new signing is one that my scouts heartily recommended to me, and for just £2.8million I couldn’t really afford to not sign him. Fitting in perfectly with the sentiments of Category A, even if the young Israeli attacking midfielder doesn’t develop as well as my scouts have predicted, then I should definitely make a profit, given that his value has already rocketed to between £34-£41million. 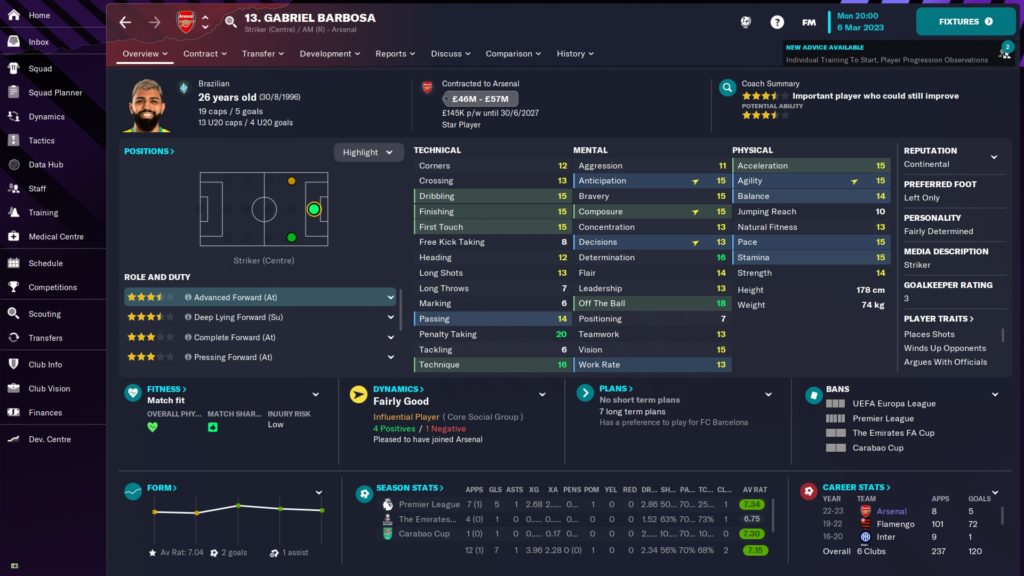 A snip at just under £20million, Barbosa is the quintessential football manager signing. I know, my imagination leaves a lot to be desired, but when given the opportunity to sign a player of his calibre – it would be rude not to. His wages are a little higher than I would have liked, but I needed to beat off competition from the likes of Real Madrid and PSG.

Barbosa offers another option up top, where I was having to play Martinelli as one of my two strikers when either Gabriel Jesus or Eddie Nketiah needed a rest due to a lack of alternate options. Barbosa is equally adept playing out on the right wing as an inside forward and will be spending his time split between the two. 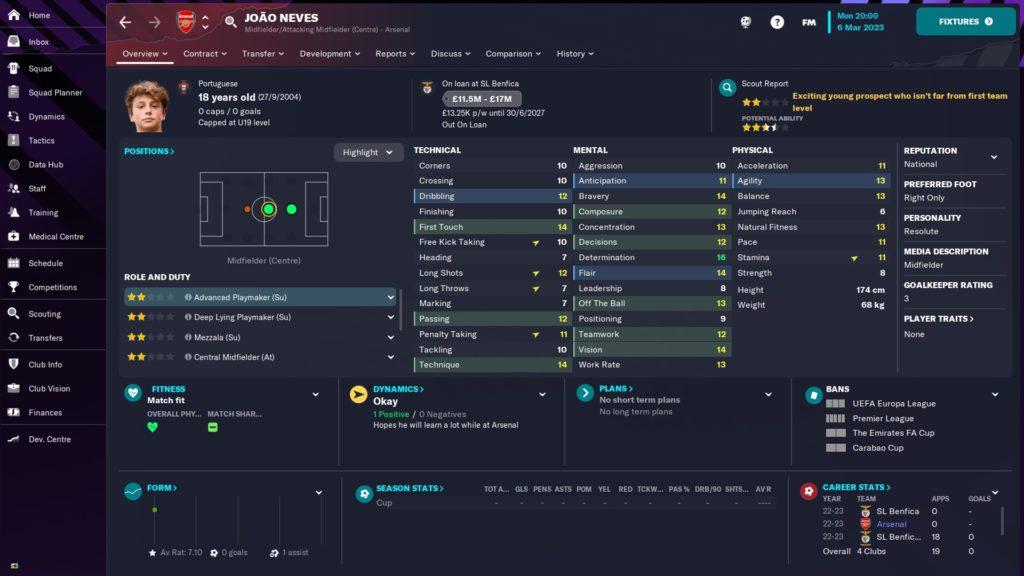 Another signed with the main intention being to sell him on for a profit further down the line, I’ve allowed Neves to remain out on loan at Benfica. Scouts think he could possibly mature into a solid first team player, but given the players that will be ahead of him when he joins the club, I can see him struggling to get the minutes needed to improve massively. 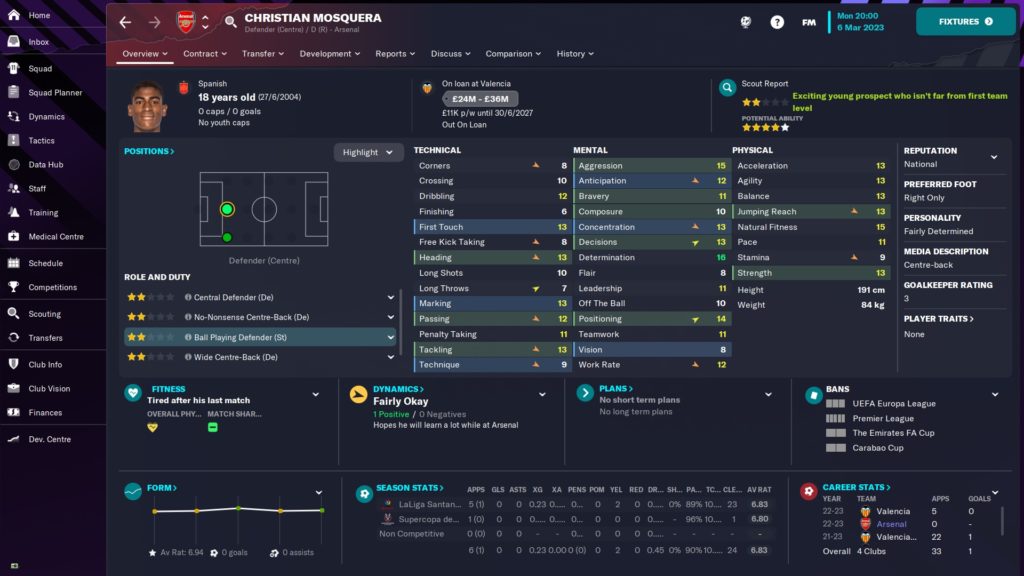 Christian Mosquera is a player that I really like the look of as a future BPD, and his contract was expiring at the end of the first season. I tried to offer him a deal so that I only had to pay compensation, but he wouldn’t listen to offers, and with a whole host of other clubs circling I decided to just part with the £3million and get it over and done with. 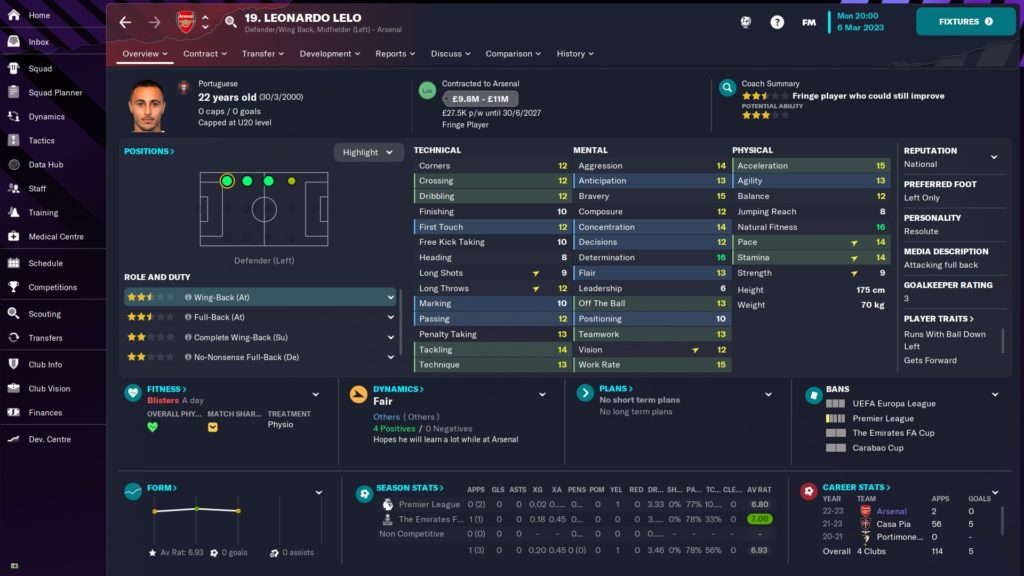 Leonardo Lelo is a bit of a weird one. He’s generally got decent attributes for a full back and was deemed as adequate backup for Tierney and Zinchenko by the scouts before I signed him. His PA has dropped slightly since I signed him, and he won’t really get too much game time with the two of them considerably better options. Going to give him a bit of game time from now until the end of the season, before loaning him out next year and hopefully making a decent profit on him. 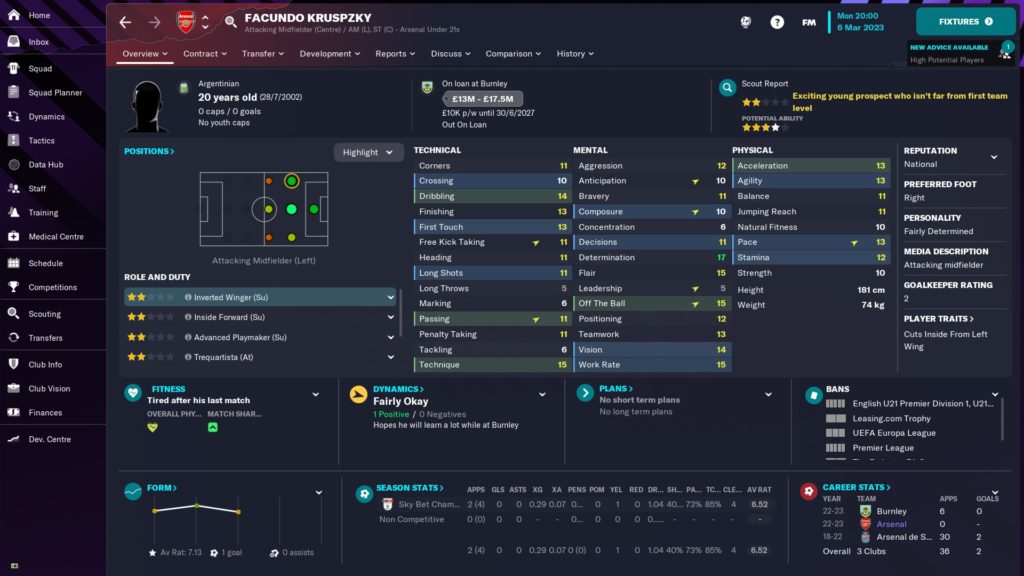 Facundo Kruspzky joins us from Arsenal de Sarandi over in Argentina for just £3.6million. His Dribbling, First Touch and Finishing are decent enough, but his Passing is too low to ever be what I look for in an Attacking Midfield role, so I’ll be retraining him as an Inside Forward cutting in from the left wing. 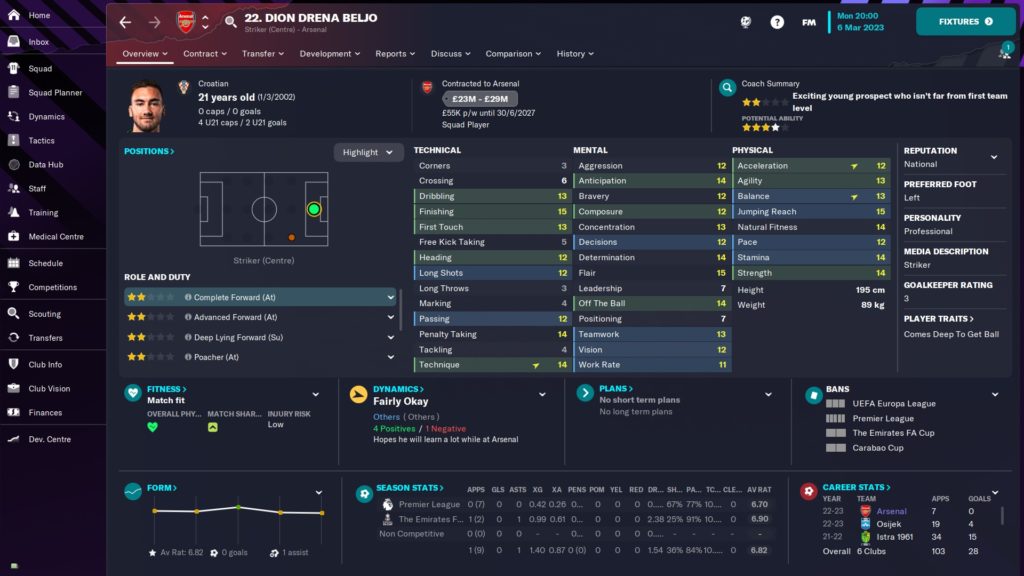 Coming in at just over £5million, Beljo is one that my scouts were raving about, saying that they think he can easily develop into a first teamer at the club. Having only just turned 21, he will be offering an alternative option to Jesus and Nketiah as a Complete Forward. I’ve got him working on his Pace and Acceleration, as if he can improve these a little bit then there’s no reason he won’t be an excellent player for years to come. 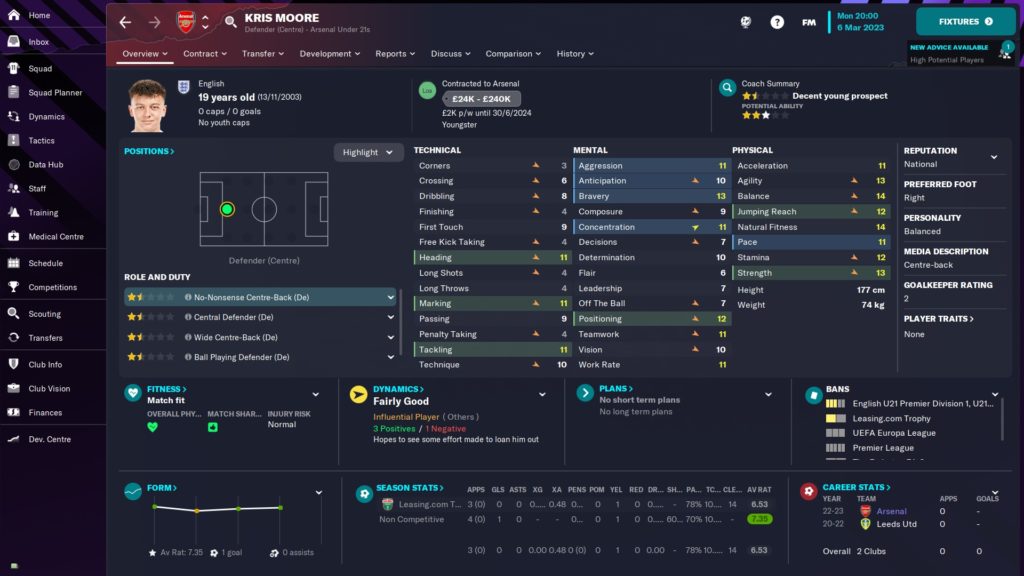 Regret signing him. My scouts lied to me. The fans hate him. The board hate him. Everyone hates him. Having paid just £250k for him, I don’t quite understand all the animosity, but poor Kris Moore will soon be shown the door. 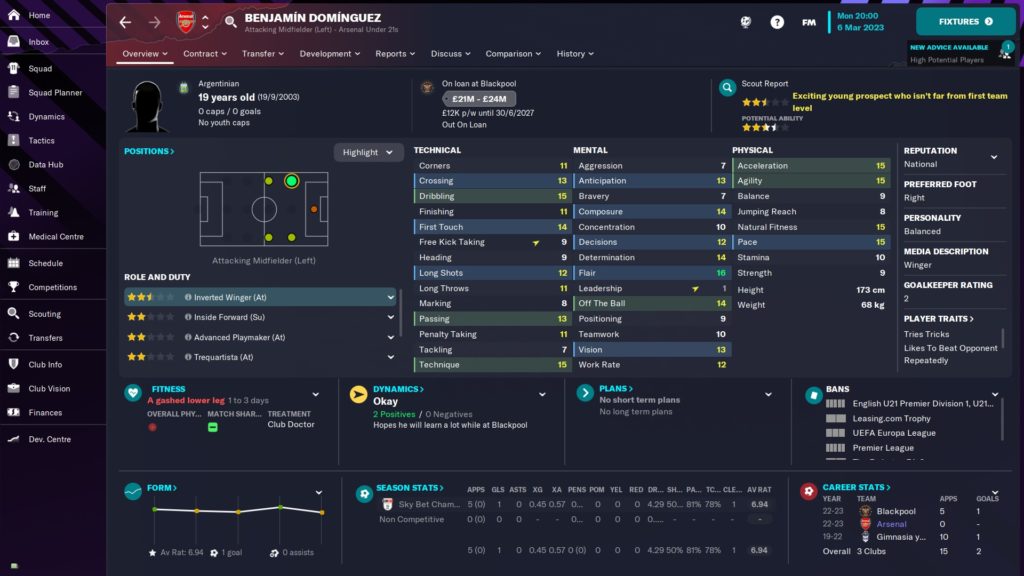 “Another South American inside forward?” I hear you all cry. And yes, I might be overdoing it slightly, but can you really have too many? This guy looks as though he’s going to develop into the real deal. Whilst Kruzpzky might just be developed to make a profit on in the coming years, I’m hoping Dominguez will become a first team regular further down the line. Two years younger than his compatriot, once he’s worked on his finishing a little, if he can remain consistent then he can become an excellent option.

Now that you’re all caught update, in my next article we’ll be identifying exactly how and why we’re struggling to escape from this poor run we’re on, and the key issues. We’ll then look at how I aim to fix these issues, adapt and overcome as we look to cement Champions League football for the 2023/24 season.

Crystal Palace vs Arsenal Preview: 3 things to look out for...

Under the microscope: Alexandre Lacazette, Eddie Nketiah, and Gabriel Martinelli –...